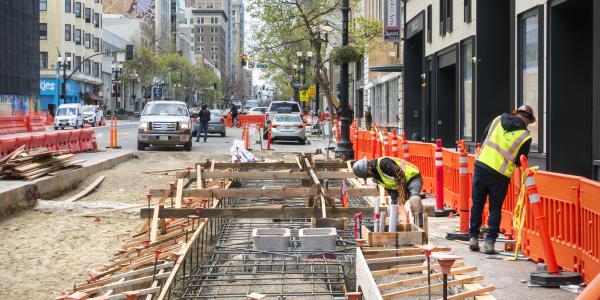 This op-ed by the leaders of SPUR, Chicago’s Metropolitan Planning Council and New York’s Regional Planning Association was first featured in The Hill.

Metropolitan areas have had a difficult year, navigating concurrent crises from rolling out mass vaccination campaigns, reckoning with impacts of systemic racism and addressing climate change — all while preparing for challenges such as impending evictions and the uncertainty of what the future of work will be. There is no ‘normal’ to return to.

There is one urgent priority our federal government can address to help cities jump start their recovery: investing in infrastructure.

It is the single most effective way to stimulate our economy and rebuild our country to be more resilient, equitable and prosperous. Large-scale infrastructure investment by our federal government is the New Deal for a new decade, adopting lessons learned from previous crises to invest in the future of our country.

Funding existing capital plans in the New York region would generate over a quarter million jobs annually, mostly through shovel-ready projects. It would also restore and modernize public housing, transit systems, schools and parks — all part of the foundation of a strong and just economy.

Per our calculations, the New York metro region alone contributes 10 percent to our country’s GDP. The San Francisco Bay Area and Chicago together contribute more than 8 percent.

While there are unique infrastructure priorities in each region, there are four actions the federal government can take to be a collaborative partner with cities.

First, deliver emergency funding to address pandemic-induced budget shortfalls for metropolitan transit authorities and ensure an equitable path forward for public transportation. Ridership has not returned to pre-COVID levels in any of our cities, despite public information about the safety of public transit. Devastated revenues will likely have a long-term effect on our nation’s public transit networks, magnifying the impact of chronic underinvestment that undermines economic growth.

Stopgap measures will not be enough. High-functioning, modern public transit is fundamental to the success of our urban economies and a critical precondition for equitable recovery. A disproportionate number of riders are essential workers and people of color who would bear the brunt of service restrictions. This must be addressed immediately.

Second, take a hands-on approach to national infrastructure priorities that have been languishing in bureaucratic limbo for years. Among the big-ticket items we can make progress on within Biden’s first 100 days are the Gateway Program, a redevelopment of the Hudson River Tunnel linking New Jersey with New York’s central business district, the Downtown Caltrain Rail Extension, which would bring high-speed and commuter rail service to San Francisco’s new regional transit hub and the completion of critical Midwest freight infrastructure as part of the joint federal-state CREATE program.

Each has national economic implications.

Federal funding for Gateway safeguards the northeast United States against catastrophic ripple effects of a partially shutdown Hudson tunnel that would mean a loss of $16 billion in economic activity.

Third, while many may think of infrastructure as the stuff of planes and trains, the most sacred goal of any infrastructure investment is to create better, safer living environments. This means funding affordable housing creation and preservation. After decades of neglecting struggling housing authorities, affordable public housing created in the mid-20th century is in crisis. The $25 billion in rent relief included in the latest stimulus bill will not solve decades of systemic inequities.

Finally, as a new report from the Kinder Institute at Rice University powerfully illustrates, the federal government must help cities prepare for the impacts of climate change, one of the greatest challenges of our future. Putting federal support behind major renewable energy growth industries — including offshore wind and climate change mitigation infrastructure like the Lower Manhattan Coastal Resiliency project — help us reach goals,  stimulate our economy and build more sustainable cities.

Our cities have come out stronger after global wars, depressions and pandemics. We have built our country on an uncompromising understanding that we can and will continue to improve — and that the future will be better than the past.

The global pandemic has shown us the right kind of federal leadership is necessary to move forward. It is imperative this leadership reflect our collective values: economic prosperity for all, tackling climate change and contributing to the health and wellbeing of our residents.

We applaud the initial efforts of President Biden. Now is the time to get them implemented.