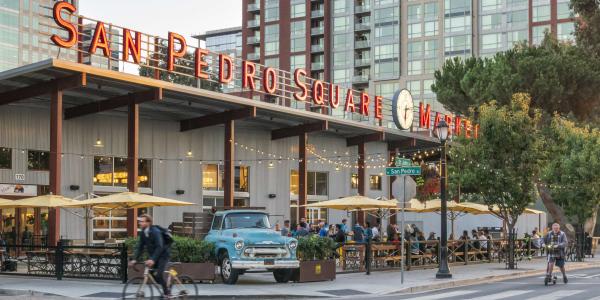 A Photo by Sergio Ruiz.

After decades of efforts to attract investment, downtown San José was experiencing a rare moment in the spotlight prior to COVID-19. Big project announcements from Google, Jay Paul, Adobe and others seemed to finally put within reach San José’s decades-old aspiration to become Silicon Valley’s lively urban center. Now, as the pandemic drags on and working from home has become routine for many, San Joséans are left to wonder how much of downtown’s previous momentum will carry through and beyond the crisis.

While uncertainty currently reigns, especially for small businesses and the hospitality industry, there are signs that downtown San José’s previous momentum has staying power. Drawing on interviews with the local leaders, business owners, developers and city staff who are shaping downtown's future, we expect to see a slow and uneven recovery driven by self-financing developers and large tech employers, whose thriving businesses will continue to drive investment in downtown.

Most downtown storefront businesses rely on weekday commuters, San José State University students and foot traffic from events such as conventions and weddings. These economic drivers have been substantially diminished by increased telework and remote classes, as well as by current public health orders that have prohibited indoor operations for most of the hospitality industry, including conventions, restaurants, bars, personal care services and event spaces.

Indeed, according to a survey of downtown businesses conducted by the office of District 3 City Councilmember Raul Peralez, nearly one-third of respondents report losing more than 90% of their usual revenue, and three-quarters say they face permanent closure if conditions don’t improve by the end of the year. The San José Downtown Association (SJDA) similarly anticipates a high number of business closures concentrated in the hospitality industry.

Commercial rents are softening as landlords and tenants renegotiate lease terms. As SJDA Executive Director Scott Knies put it, “Having a tenant in the building right now is gold. There will be shared pain for a long time.” County-wide commercial leasing activity confirms this assessment: Between Q1 and Q2 of 2020, leasing activity dropped 70% for flex/R&D space and 60% for office space, but vacancy rates remained fairly stable.

Residential rents downtown have also declined, perhaps as much as 10%, but reductions are focused at the high end of the market, where higher-income workers have more options. As in the commercial real estate market, owners of high-end apartments are reducing rents and offering incentives to keep vacancy rates low.

Beyond the immediate impacts, COVID-19 threatens to compound long-standing challenges to the downtown business environment, including homelessness, public perceptions of safety risks and cleanliness, and a lack of residential density. Responding to members’ concerns about attracting customers, SJDA recently unveiled a business stabilization plan that prioritizes keeping downtown safe and clean. Without major investments, these factors are likely to create some drag on economic recovery in the coming years. SJDA will be working over the next year on a renewal campaign for the Property-Based Improvement District that pays for these critical services.

Downtown San José appears to be in for a rough few years as many — perhaps even a majority of — small businesses close and larger employers and event organizers await a public health breakthrough before they can reopen. Even if such a breakthrough occurs before the end of the year, there will likely be a significant lag period before new business creation and large public gatherings drive downtown’s business activity back to pre-COVID levels.

San José Is Still the “Capital of Silicon Valley”

We’re still bullish on downtown San José and believe it will continue to attract significant development investment as the only major urban center in the South Bay. Its additional jobs capacity positions downtown for a strong recovery in the years ahead, especially as existing workers return and the events and conventions market rebounds.

Moreover, the types of companies looking to expand into downtown are thriving in spite of — and in some cases, as a result of — new realities. COVID-19 has increased demand for e-commerce platforms, telework solutions, digital entertainment and other technology-enabled sectors that are led by Silicon Valley companies. Zoom, headquartered in downtown San José, has seen its stock rise 350% since the initial shelter-in-place order in early March.

With the exception of Boston Property’s Platform 16 project on W. Julian Street, which broke ground in early March but halted construction in late April, new developments in downtown have resumed construction and additional projects continue to enter the pipeline. Staff members in the City of San José Department of Planning, Building and Code Enforcement report receiving applications for several new large projects in recent months. “Overall, we have a relatively robust development pipeline with at least a few projects anticipated to start construction in the next few months,” says Emily Lipoma, a development facilitation officer at City Hall.

Development plans are being adjusted to take into account pandemic conditions, such as the need for greater social distancing. Adobe, for example, is continuing work on the exterior of its new office tower while reviewing interior construction in order to assess potential floor-plan changes. As companies plan for future needs, they will take into account both increased remote work and greater space requirements per employee for social distancing purposes (for example, the Santa Clara County public health order currently requires 250 gross square feet per worker).

Developers continue to express optimism about downtown office development and are still exploring future opportunities in the area while waiting to understand how the public health crisis will unfold and when vaccines and therapeutics may be available. Attracting investment for new high-rise residential development, on the other hand, continues to be a challenge due to the high cost of labor and materials, which have not decreased in response to COVID-19.

Google’s development plans continue to be viewed as a major catalyst for downtown. Release of the draft environmental impact report for Google’s Downtown West Mixed-Use Plan was delayed but is now out and available for public comment. Draft design standards and guidelines for the Downtown West project have also been released, and city staffers are expected to release draft amendments to the Diridon Station Area Plan and the Draft Diridon Station Area Affordable Housing Implementation Plan in the near future. The San José City Council is planning to hold a study session on these topics in November.

Following stakeholder engagement and input, staff expect to bring the Downtown West environmental impact report and an amended version of the Downtown Station Area Plan to the City Council for final approval in March of 2021.

Ultimately, if major developments — including key projects by Google, Adobe, Jay Paul, Urban Community/Westbank and Urban Catalyst — stay on track, downtown San José could be poised for a strong recovery on the other side of the pandemic. To make the most of that recovery, the city should focus on increasing residential density and population, addressing the growing homelessness crisis, and ensuring that major transit projects are completed on time and on budget.

The 2020-2025 Community Plan to End Homelessness, recently released by the County of Santa Clara, is a comprehensive roadmap that has been endorsed by the San José City Council and should be followed. Voter approval of Measure E in March and the adoption of a commercial linkage fee to fund affordable housing will now provide the Housing Department with key local funding that can leverage county, state and federal resources to build more affordable housing including permanent supportive housing.

BART has finally reached San José with the opening of the Berryessa/North San José Station, and BART to Silicon Valley Phase II, which will bring service downtown, is key to unlocking the city center’s full potential.

High-speed rail construction is working its way north and creating thousands of jobs in the Central Valley. Diridon Central Station will be the largest transit hub west of the Mississippi River upon completion of these projects. These major transportation investments are the most important long-term factor for the success of Downtown San José and are critical to achieving our climate change goals.

Cities across the country are seeking out creative ways to help stabilize and support small businesses as they struggle to survive the pandemic. One prevalent theme in many local economic recovery strategies is to center the work on principles of placemaking and public life. In San José, Mayor Sam Liccardo and Councilmember Dev Davis proposed the Al Fresco initiative, which allows businesses to expand their services outside while reducing permitting requirements and fees. The city implemented this effort by providing the necessary materials, such as barriers to help transform highly active commercial streets into walkable public plazas.

This initiative began downtown and recently expanded to many of San José’s surrounding neighborhoods, with outdoor commercial centers converting excess parking into additional dining space. We have been encouraged by this effort and have advocated for this program to be expanded downtown and throughout the city and to remain permanent.

SPUR has recommended other policies that would support small businesses by temporarily relaxing permitting for conditional uses and allowing existing businesses in neighborhood commercial districts to shift among commercial uses without requiring a change-of-use permit post-pandemic. It will be imperative that the city remain flexible and innovative to retain and attract businesses.

We also believe that now is the time to further invest and prioritize in the civic commons. Throughout the pandemic we have seen increased interest in and use of public spaces. These spaces can no longer be looked at as a “nice to have” aesthetic bonus but rather must be considered essential city infrastructure.

SPUR strongly believes that all residents of San José should have access to high-quality public space within 10 minutes of their home. These places are vital for our health and social wellbeing and represent a key driver for economic development and determinant of our overall culture and quality of life.

Downtown San José has been particularly hard-hit by the pandemic, but its fundamental virtues and attractiveness for investment will remain as long as the city focuses on the basics by helping small business cope and become resilient, maintaining cleanliness and public safety, and continuing to set the table for transformative investments and developments that will allow its ambitious plans and visions to finally come to fruition.