Engaging Communities During the Pandemic 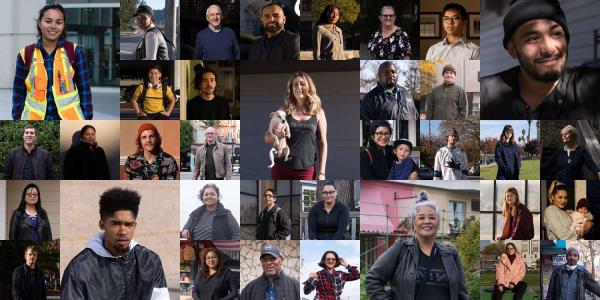 The COVID pandemic has pushed local governments to find new ways of holding public meetings and engaging communities. The results are bringing more voices to the table. Photos by Ryan Young from SPUR's We Are the Bay exhibition.

Local governments and elected officials have played critical roles in steering American cities through the COVID-19 crisis and will play a leading role in the recovery ahead. Despite the orders to shelter in place and maintain social distance, essential infrastructure projects, planning processes and government functions continue to move forward as before. This begs the question: How do we engage communities in these plans and processes when we can’t meet face to face?

While this situation presents real challenges to public engagement as it is usually done, it is also pushing organizations to test new approaches, overcome long-standing barriers that have limited participation for many, and improve processes that are overdue for rethinking.

Even before COVID-19, public engagement was typically not that engaging, often failing to reach the public it was meant to engage. Many interested and concerned residents didn’t — or couldn’t — show up to public meetings or take part in other conventional forms of outreach. Whether it was due to contending with family or work commitments, the prospects of spending the evening sitting on an uncomfortable chair and drinking lukewarm coffee at a community center, or an unwillingness to listen to the same five people dominate the conversation in a council chamber, community engagement was too often an unpleasant chore. Now that the in-person meetings are not possible, however, creative approaches are emerging that have the potential to enable more people to actually participate in ways and at times that actually work for them. Virtual engagement poses its own set of challenges, however, particularly for those who can’t bridge the digital divide.

Government leaders like Senator Scott Wiener report that their virtual town halls are reaching and engaging more people than in-person town halls ever did. The virtual meeting space has the opportunity to bring in more voices to the community engagement process, but it means that it must be done well to be effective. When participants understand and believe in the process, they can focus on the content rather than on critiquing — or subverting — the process. Here are four things to keep in mind when conducting public outreach online.

As is the case with successful in-person meetings, virtual engagements that work are those that enable the fundamental human desire to connect, interact and engage with others — to see and be seen.

Organizations of all kinds have spent the last few months learning to use the wide range of formats and tools that can allow for dynamic, high-quality conversations in large, medium or small groups. NBA star Steph Curry hosted an Instagram Live Town Hall with Dr. Anthony Fauci to answer questions about COVID-19, which drew in over 50,000 viewers (including former President Barack Obama). On a smaller scale, the City of San José recently held a Diridon Station Area Advisory Group meeting on Google Meet for around 100 attendees. These platforms, as well as others like Zoom, Microsoft Teams and Facebook Live, enable live chatting among participants and between participants and the host. As with good face-to-face interaction, good moderators are invaluable to ensure that different perspectives are being heard considered, and responded to, just like they would be at an in-person meeting.Those who are good at using the tools of engagement, like live polling, will be better at keeping people engaged and helping them feel that their input is being listened to.

When conducting public engagement processes online, though, organizers need to pay attention to varying degrees of comfort and familiarity with technology. Meeting organizers should strive to use formats that are easy to navigate, smartphone-friendly and don’t require downloads of apps and pdfs. Organizers should have tech-savvy staffers standing by to offer impromptu tech support.

Depending on the nature of the meeting, organizers should limit the amount of time spent in large groups. Some online meeting platforms allow you to easily divide large groups into smaller ones, where a handful of participants can interact in real time. For these formats to work, it’s important to have moderators for every small group that can direct the conversation and collect and synthesize feedback.

2. Meet people where they are.

Corinne Winter, a community outreach consultant who primarily works in the East Bay and South Bay, says she is leaning on Facebook Live and YouTube because “that’s where people are.” Before COVID, pop-up workshops were increasingly popular because they would catch people who just happened to pass by. Love them or hate them, Facebook and YouTube are the digital equivalent of the commons in the COVID era, and savvy community engagement efforts can reach broader audiences by livestreaming interactive video on these platforms.

3. Match the tools to the audience.

Zoom, Webex and the scads of lesser-known online meeting tools are “the digital equivalent of a traditional meeting at City Hall,” Winter says. These tools have valuable functions, such as the ability to create breakout groups and set passwords for security and access. A Zoom meeting format might be the perfect tool for an advisory committee, but it is less likely to reach new and non-traditional audiences.

A disconcertingly large percentage of Californians still lack broadband internet access, particularly in low-income households. This disparity is partially remedied now that most households can access the internet using a cellphone. However, that doesn’t mean these households can reliably participate in online meetings and forums. For one thing, cell phone data plans are expensive, and most online meeting platforms are data-guzzlers — especially if there’s live video. Data plan gift cards or other cash incentives can help, but that’s a difficult and expensive strategy to scale.

Zackman emphasizes that the best strategy for reaching low-income residents during the pandemic is to partner with local community-based organizations who make it their business to serve, connect and advocate on behalf of vulnerable households during this time. These can include faith-based organizations, renter and tenant organizing groups, public health advocates, and social service providers, among others.

4. Include as many people as possible — and keep them engaged.

While live meetings have the advantage of providing the structure for dialogue and face-to-face interaction, it is usually too difficult to find a meeting time that works for everyone, and it’s logistically challenging to make sure that the meetings are conducted in a language that everyone can understand. What virtual meetings lack in social interaction, they can make up for by enabling greater inclusivity. Useful tools include closed captioning, simultaneous translation, virtual town halls, chat rooms, online comment boxes and virtual office hours. Some groups are pioneering 24- or 48-hour “live” events where participants can come and go throughout the day, dive into various conversation threads and start new threads of their own

Now that we can't come together face to face, local governments and elected officials have new challenges, as well as new opportunities, as they try to figure out how to engage communities. Though the constraints might be new, the principles that distinguish good engagement from not-so-good engagement remain the same. This is the new reality — so let’s make the best of it.

* Robert Ogilvie is SPUR’s Oakland Director, Autumn Bernstein is a Senior Planner at ARUP and Megan Hophan is an Executive Assistant at SPUR.