The Power of the Commons: Public Spaces Will Be Critical for San José’s COVID-19 Recovery 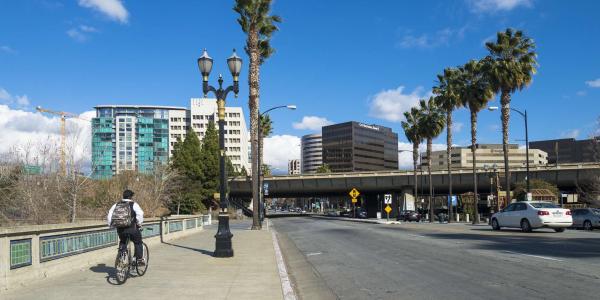 Between Diridon Station and downtown San José, Santa Clara Street crosses over Guadalupe River Park and under Highway 87. A new initiative will look at how public spaces can better connect the city and support its residents. Photo by Sergio Ruiz for SPUR.

As it has in cities around the world, sheltering in place has given the people of San José a greater appreciation for public spaces. The city’s parks, hiking trails, open spaces — even streets — have provided residents with fresh air, exercise and needed moments of connection to other people, if at a safe distance.

Just like roads, transit and drinking water, public spaces are becoming recognized as critical public infrastructure — places essential to our everyday lives, especially during a national emergency. Many are seeing for the first time that San José’s success as a city depends on the success and health of these spaces. It’s time to rebuild the social fabric of our communities, and that starts with our civic commons.

SPUR is happy to announce that San José is one of five new cities to join Reimagining the Civic Commons, a national initiative advancing ambitious social, economic and environmental goals through revitalized and connected public spaces. SPUR will act as convener for the three-year initiative, partnering with the City of San José, the Guadalupe River Park Conservancy, the San José Downtown Association and Veggielution.

Over the last 50 years, Americans have increasingly been living lives isolated from each other, more segregated by income and belief than at any time in modern history. For decades, we have designed our communities to promote separation and have made “opting out” of public life much easier than opting in. At the same time, health researchers have proven that growing social isolation — being cut off from connection with others around us — is causing physical and mental illness, even premature death.

While these trends that worsen social isolation, tribalism and distrust have grown, our civic assets — our parks, trails, libraries and community centers, the very places that could bring us together — have suffered from disinvestment.

Every year, parks and recreation departments, trail maintenance and library operations fall to the bottom of nearly every municipal budget. They are seen as “nice to have” but not essential. Especially during a market downturn like the one we’re experiencing now, efforts to support placemaking and community engagement are typically the first items to be cut.

Over the next three years, San José will have the opportunity to increase its efforts to establish equitable public spaces that foster resilience through Reimagining the Civic Commons. Our team will connect with and learn from civic leaders across the country, forging new ways to design, manage and operate public spaces for the benefit of all.

The San José efforts will focus on creating a “civic compass” where all communities meet. The north-south axis is the Guadalupe River Park, an under-utilized but strategically located linear park that weaves the east and west sides of downtown together. To the east is a collection of historic buildings, commercial properties and key civic sites. To the west is a blend of older industrial buildings, residential neighborhoods and one of the region's key entertainment and sports venues. The east-west axis is Santa Clara Street, the main gateway in and around San José. The street has the potential to be redesigned in a way that fosters greater interaction and connection between downtown and the city at large. At the center is Silicon Valley’s major transportation hub, Diridon Station, which is slated for $1 billion in public and private investment over the next decade.

“It’s a very exciting opportunity,” says Jason Su, Executive Director of the Guadalupe River Park Conservancy. “The idea of San José’s civic greenway connecting to its grand boulevard at the epicenter of the region’s largest transportation and commercial investment highlights the opportunity and necessity to think about how our spaces lead to neighborhood enrichment.”

To better facilitate this movement, we have developed a cross-sector cohort that will work together to help inspire, create and ignite projects, policies and strategies to support public life:

San José Deputy City Manager Angel Rios believes the city is joining the program at a critical time. “As a city, we believe in our public life and have been working hard with partners like SPUR, the Guadalupe River Park Conservancy and others to create a vibrant and welcoming community for all,” he says. “Our recent experience with COVID-19 has only increased our resolve around enhancing our public realm to provide safe and inviting spaces that connect people to people.”

We know the economic crisis spurred by the current pandemic will inevitably bring discussion of publicly funded infrastructure programs. Investments in infrastructure put people back to work during the Great Depression a hundred years ago, and infrastructure investments helped us recover from the Great Recession a decade ago. But an infrastructure stimulus does not have to consist of monumental mega-projects like the Hoover Dam. Public spaces are critical infrastructure — essential for supporting the health and well-being of all San José residents and for building a more resilient shared future. We look forward to learning how the Reimagining Civic Commons network and partnership can help move forward this theory of change in San José. Through collaboration and innovation, we have the opportunity to harness the power of our civic commons as we begin to recover and rebuild in San José.