Close Off Some Streets — for the Health of the Public

By Robert Ogilvie, Harold Goldstein and Mary A. Pittman 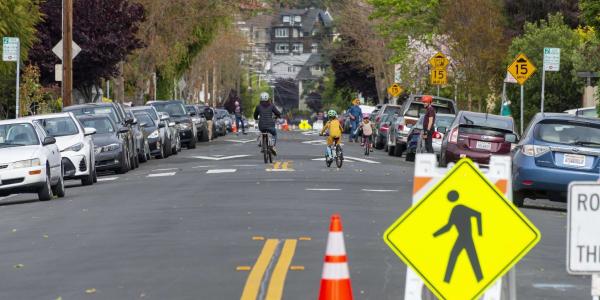 Oakland has closed 74 miles of streets to through traffic in order to create space for people to practice social distancing while outdoors. Photo by Sergio Ruiz.

This editorial originally appeared in the San Francisco Chronicle.

On March 16, Bay Area counties issued a shelter-in-place directive, an emergency measure that required non-essential businesses to close and asked residents to stay in their homes and keep their distance from others to halt the spread of the coronavirus. Such decisive and early action seems to have succeeded in protecting our region from the worst ravages of the public health crisis brought on by an unprecedented infectious disease. We have much lower rates of infection and death than other major metropolitan areas, and our local elected officials deserve praise for their quick and decisive action.

One month later, the time has come for the mayors in the region to take decisive action again to further safeguard our communities by designating hundreds of miles of our region as “slow streets.”

Slow streets are regular neighborhood streets that have been closed to through traffic with signs and traffic cones at each intersection. (Residents can still drive to and from their homes.)

On slow streets, Bay Area residents can safely walk, wheelchair roll and jog in traffic lanes, as well as on narrow sidewalks, providing enough space to safely socially distance. Slow streets remove the need for those of us cooped up in our homes to rush to crowded parks and beaches on weekends to get outside. They start to equalize the opportunity to be safely outside for disadvantaged communities that lack parks and other open space.

Since COVID-19, there have been far fewer cars on the road, significantly reducing the number of crashes. This avoids trips to the emergency room, which would further stretch a depleted health care system; in fact, since the shelter-in-place order, pedestrian fatalities have plummeted to almost zero in the Bay Area.

As transit service is drastically diminished, especially in urban parts of our region like San Francisco and San Jose, a network of connected slow streets can act as arteries for essential workers to safely walk and bike to their jobs. Cities like San Jose, San Francisco and Los Angeles have already had great success with temporary street closures with programs like Viva CalleSJ, Sunday Streets, and CicLAvia, respectively. It’s time to put these closures in place on a grand scale — and not just on the weekend.

By making it safer for us to be outside in a socially distant way, slow streets also help us combat another more familiar public health crisis: the chronic diseases caused by inactivity. As of 2018, 42.4% of American adults were obese, and obesity-related conditions — such as heart disease, stroke, type-2 diabetes and certain types of cancer — were among the leading causes of preventable premature death. In 2017 alone, diseases of inactivity were responsible for over 700,000 deaths. A month, and counting, sitting at home without walking to the train to get to work, riding a bike to school or taking the bus to the grocery store isn’t going to help matters.

Mayor Libby Schaaf of Oakland has already taken the lead and instituted Oakland Slow Streets, closing 74 miles of Oakland streets to through traffic by motorized vehicles to promote public health. On Tuesday, Mayor London Breed announced a similar (though smaller) initiative. Boston, Minneapolis, Philadelphia, Denver, Vancouver, Winnipeg and Calgary have all made similar changes, with some cities also shutting down some roads to cars entirely and others extending sidewalks into parking lanes or creating pop-up networks of protected bike lanes.

Oaklanders can now use the slow roads of the pandemic era to get some social distance from each other as they walk, run, cycle and roll — free from worry about being hit by a vehicle. Residents of San Francisco, San Jose and all other cities in the Bay Area deserve the opportunity to do the same. With streets suddenly empty — and with all of us now, more than ever, needing a bit of space — other mayors should follow Mayor Schaaf’s lead and show that, once again, the Bay Area is ahead of the curve in protecting the public’s health.