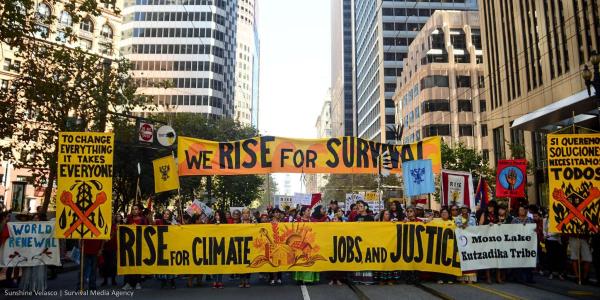 Thousands of people converged in San Francisco for the Rise for Climate, Jobs, and Justice march prior to the Global Climate Action Summit. Photo courtesy 350.org.

Among the most inspiring outcomes of the Global Climate Action Summit, hosted in San Francisco earlier this month, were the climate commitments made by governments and organizations around the world. A number of Bay Area cities and agencies announced ambitious new goals that will wean the region off of natural gas and diesel and make way for a carbon-free future.

Kicking off the week, summit host Governor Jerry Brown signed SB 100, a bill requiring California to have 100 percent carbon-free electricity sources by 2045 — then he took that up a notch with a new executive order calling on the state to achieve total carbon neutrality by the same date.

Next, mayors began to announce new climate commitments for their cities, starting with San Francisco Mayor London Breed, who pledged to accelerate San Francisco’s reputation as a zero-waste leader by reducing the city’s landfill disposal 50 percent by 2030, and ensuring all buildings are net-zero emissions by 2050. This second pledge is especially bold as it entails weaning San Francisco from natural gas and only permitting all-electric buildings, with the electricity coming from carbon-free sources. All-electric buildings are seen as a way to decarbonize the built environment, while providing better indoor air quality and health benefits; this strategy was a key recommendation of SPUR’s 2016 report Fossil-Free Bay Area.

During its climate summit event, the City of San Jose “flipped the switch” on its new clean energy program, the largest single-city community choice energy program in the country that will deliver 100 percent renewable electricity to city residents by 2019. San Jose also received the first-in-California LEED for Cities Platinum certification by the US Green Building Council, in recognition of long-term commitments to cleaner air, cleaner water, waste reduction and more. San Jose also committed to enacting regulations and policies to ensure that all new buildings operate at net zero energy by 2050.

The C40 Cities group, a network of large cities around the world dedicated to reducing emissions and sharing best practices, announced during the summit that 27 large cities (including San Francisco and Los Angeles) have already reached “peak emissions.” Each of these cities has reduced emissions over at least five years, while their population and economies have grown.

Finally, the Bay Area Air Quality Management District announced Diesel Free by ’33, a commitment to end diesel use in the region within 15 years, signed by more than 75 government and business leaders. Diesel exhaust, which is especially toxic and especially prevalent in areas already suffering from environmental hazards and inequities, causes acute respiratory illness, is co-emitted with “super pollutants” that contribute more to global warming than carbon dioxide does, and can be replaced with safer engines and fuels. The pledge includes committing to: collaborate on policies and ordinances to end diesel exhaust emissions, share and promote financing mechanisms for zero-emission equipment and assist the private sector in moving toward zero emission fleets and buildings. Bay Area signatories to this pledge include the mayors of Oakland, San Jose, Richmond, Berkeley, Fremont, Albany, Benicia, Cupertino, Emeryville and more, as well as the county boards of supervisors for Contra Costa, San Mateo and Sonoma counties.

In a time of federal inaction on climate change, it’s critical that states, cities, businesses and other actors increase their efforts. Governor Brown’s climate legacy, culminating with the Global Climate Action Summit, is strong and significant, with long-term emissions targets now enshrined in state law that will require continued innovation in policy and programs. California’s cities, along with others around the world, have shown a willingness to lead. Now we must keep going, as the imperative to stop climate change becomes more clear every day.