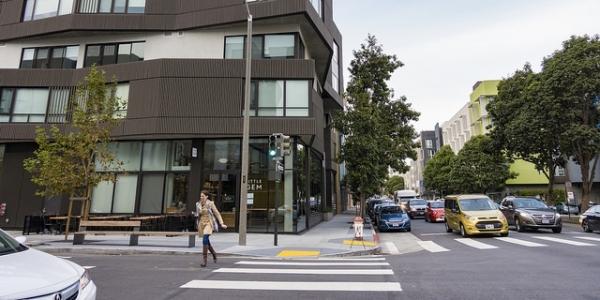 This summer, the San Francisco Board of Supervisors adopted legislation that makes big changes to the city’s affordable housing requirements for residential development. After several months of negotiation, the supervisors came to unanimous agreement on a complex package that they hope will endure. The new legislation alters almost every aspect of the inclusionary housing ordinance, including the type and number of units that will be required and the income levels that this housing will serve.

How Much Affordable Housing Is Required?

The new requirements are lower than what was temporarily established by 2016’s Proposition C but higher than the baseline 12 percent requirement that was in place for the prior four years. New developments with 25 housing units or more are now required to either make 18 to 20 percent of their units affordable, build affordable units at another location equaling 30 to 33 percent of the total units, or pay an in-lieu fee equivalent to the cost of 30 to 33 percent of the units, which will then be used to build affordable housing elsewhere.

A core tenet of SPUR’s Agenda for Change is getting housing development fees right. This means researching potential fee amounts before enacting them to ensure that they’re set at a feasible level that does not impede development. 2016’s Prop. C required the SF Controller’s Office to complete a feasibility study, and some supervisors advocated to hew closely to the findings. As a result, the baseline percentages for required onsite units have been set at the maximum of the recommended range. However, the requirements for the offsite or fee options are both 5 percentage points above what the controller recommended.

In addition, annual increases to the onsite requirement have now been established, which could potentially make future projects less feasible. The onsite requirement will increase by 1 percent on January 1, 2018, and January 1, 2019, and then increase 0.5 percent per year until it reaches 24 to 26 percent. There is no explicit provision that allows these requirements to change if the economic environment changes significantly. The idea behind inclusionary housing is that the units sold or rented at market rate help to cover the cost of the affordable units. But over the years, the number of market-rate units will shrink to a point at which they may not be able to support the creation and operations of the increasing number of affordable units.

Who Will the Affordable Housing Serve? 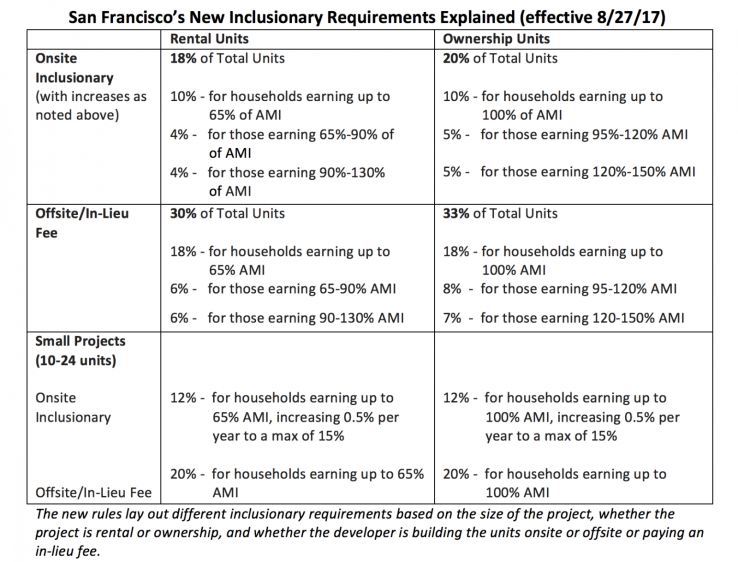 A Complicated Set of Rules

Some areas of the city have been carved out for special treatment. For the Mission, the Tenderloin and the 6th Street/Folsom corridor, areas that are all anticipated to go through future planning processes, 2016’s Prop. C requirements remain in place: 25 to 27 percent affordability requirement onsite, 30 percent fee or offsite requirement. While deferring this decision to a neighborhood-specific process is a legitimate strategy, it’s not clear that these “interim” requirements won’t just remain in place in perpetuity in order to stall market-rate development in these areas.

In addition, the state density bonus law became a flashpoint for this legislation, with some arguing for the city to recapture all additional value created by the density bonus and others arguing that putting an affordable housing requirement on bonus units would violate state law. The city’s solution has been to impose the in-lieu fee on any bonus units resulting from use of the state density bonus law. State legislation currently under consideration could clarify whether the city can impose this requirement.

And this list isn’t comprehensive. Some important rules have been added, including requiring replacement units or fees when restricted low-income units or rent-controlled units are demolished or converted. Given the yearly increase in the requirement, the legislation also establishes fairly reasonable rules for when the requirement rate locks in and ensuring that projects are truly moving forward. Clearly, the new rules are complex.

Making things even more complicated, the supervisors packaged the inclusionary requirements with another significant but unrelated component: a new citywide multi-bedroom requirement for new housing developments. Twenty-five percent of units in each project must be two-bedroom units, and 10 percent of units must be three-bedroom units. Proposed in the spirit of making San Francisco friendlier to families, this requirement could unfortunately make some projects financially or physically infeasible, especially on tight sites and in small projects. New market-rate two-bedroom and three-bedroom units are also likely to be quite expensive.

What’s Still on the Table?

As mentioned earlier, some neighborhoods may have follow-up planning processes to establish a different rate from the 2016 Prop. C requirements. The legislation also requires the Mayor’s Office of Housing and Community Development and the Controller’s Office to study and update the in-lieu fee methodology and rate. The Planning Department and Controller’s Office must study any zoning changes adopted or considered since January 1, 2015, to see if higher requirements are feasible with any increased allowable density. And we’ll find out soon whether state legislation clarifies San Francisco’s ability to impose additional requirements on state density bonus units or not.

SPUR is pleased to see the supervisors coming together to combine two opposing pieces of legislation into one. We’re also appreciative of the fact that the feasibility study was taken seriously while this legislation was under negotiation.

However, we remain concerned about feasibility. Because of assumptions in the controller’s analysis and construction costs that continue to rise, we’ve repeatedly encouraged decision-makers to select a requirement at the lower end of the recommended range. If the requirement is set too high, we will see fewer housing proposals making it through the process, fewer developers competing in the San Francisco market and fewer housing units — both market-rate and affordable — getting built.

We’re also worried about excessive bias toward the onsite option. While onsite affordable housing is desirable for many reasons — including the principle of economic integration and the practical desire to deliver the affordable units at the same time and in the same location as the market-rate units — there are some equally desirable benefits that come with offsite affordable housing, built either by the developer or by city-selected affordable housing developers. In-lieu fees go into the Housing Trust Fund, which the Mayor’s Office of Housing allocates to nonprofits who build even more deeply affordable housing. Paired with federal and state subsidy, these dollars can go further, creating more units than the onsite requirement might. In addition, these fees can be used to create units for populations that are not served by the traditional housing market, such as permanent supportive housing and housing for youth aging out of foster care. Offsite inclusionary projects can also lead to valuable partnerships between affordable and market-rate developers, enabling stalled projects to move forward or projects of greater scale to materialize.

We think it’s better to have real options for developers and to provide a diversity of approaches. Too low of an in-lieu fee means the city won’t get as much value as it is entitled to. Too much weight on the onsite option means we won’t be recharging the Housing Trust Fund as regularly, slowing down the city’s pipeline of 100 percent affordable projects. We need a healthy mix of approaches to best serve all San Franciscans.

Check out the final legislation >>