Making Bay Area Transit Affordable for Those Who Need It Most 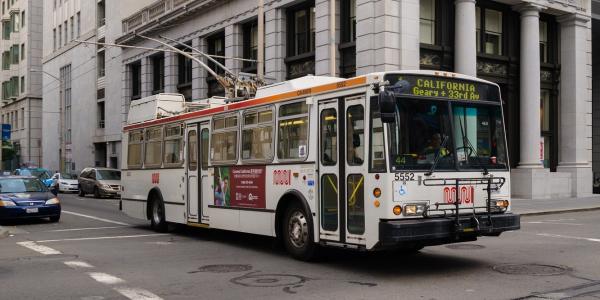 In San Francisco, Muni currently provides a discounted monthly pass to people with limited incomes. The Metropolitan Transportation Commission is exploring ways to provide such a discount region wide. Photo by Sergio Ruiz.

For most households in the Bay Area, transportation is the third-biggest monthly expense, behind housing and food. When transit is out of reach, its promise — access to other people, goods, jobs, education and opportunity — cannot be realized. How can we ensure that transit fares remain affordable for the region’s low-income residents?

Low-income Bay Area residents rely heavily on public transportation, as most do not own cars. To reduce the cost of transit, several Bay Area transit agencies currently offer a discount to low-income riders. However, these programs are limited in scope; many reach only targeted populations, such as the homeless, and are designed to meet immediate and not ongoing needs.

In 2015, the Metropolitan Transportation Commission (MTC) launched the Means-Based Fare Study to determine if a region-wide transit discount for people with limited income would be feasible and effective. As the discount would be based on one’s means or income, it would be provided to Bay Area residents making less than 200 percent of the federal poverty level ($48,500 for a family of four). According to the study, approximately 1.9 million Bay Area residents, 26 percent of the region’s population, would qualify. Currently, a little more than half of riders across all Bay Area transit agencies are low-income.

What Percent of Transit Riders Have Limited Incomes?

As a next step, MTC will pilot one or both of these options to test the feasibility of a low-income transit fare program. The specific details of the pilot — such as whether the low-income discount(s) will be tested on one agency, for example BART, or across a geography, for example all transit agencies in the East Bay — are currently being determined by MTC.

The Means-Based Fare Study is an important step to ensuring that low-income Bay Area residents across the region are not priced out of public transportation. SPUR appreciates that MTC is studying this issue, and we recognize that providing transit at a discount to low-income residents requires finding political, logistical and financial solutions. In consultation with experts and stakeholders, we developed several suggestions for the study’s next steps. The following are some of the suggestions SPUR offered to MTC in a letter addressing the study.

Prices and rents are soaring in many Bay Area cities, pushing people with limited income to the outer areas of the region where they are farther from jobs and activities. There are 27 different transit agencies in the Bay Area, and fare structures differ from operator to operator. Riders who need to transfer between operators to reach their destination have to pay two or more different fares. Low-income residents feel this transfer penalty most acutely.

Low-income residents surveyed for the study said a regional pass that addresses the high cost of multi-fare trips was the solution they preferred. Participants expressed strong support for a pass that included trips on different operators and for making transfers more affordable, suggesting that many need to use more than one ride, and in many cases more than one transit system, to reach their destinations.

The Means-Based Fare Study considered but ultimately recommended against a regional pass out of a concern that this option would be too difficult to implement and would pose a potential barrier to bringing a low-income transit fare program into existence. We think it’s premature to decide not to pursue a regional pass because of technical and organization barriers. A regional pass could do a much better job of meeting the transit needs of low-income people. Seattle, which like the Bay Area has multiple transit agencies, demonstrates that it’s possible to offer a discount across transit agencies. The city’s ORCA LIFT program allows eligible residents to ride for $1.50 regardless of what agency provides the ride.

The Clipper fare payment card should work for everyone regardless of income, but several aspects of the card limit its usefulness for low-income riders. Unfortunately, Clipper’s shortcomings were not addressed in the study. MTC is in the process of developing the next generation of the Clipper card. As part of the upgrade, SPUR recommends that MTC identify changes to benefit low-income transit riders, such as:

3. Design a means-based program that makes applying for, using and renewing the discount fare an easy experience.

The low-income transit fare program needs to be easy to apply for, easy to use and easy to renew. MTC should evaluate whether picture ID cards are necessary, especially if they add cost or make the program more difficult to access. The ORCA Lift program opted not to require picture ID cards to reduce the potential for stigma.

The low-income transit fare program should not add complexity to an already complicated fare landscape. MTC is considering structuring the pilot program like the Regional Transit Connection Clipper card, a version of Clipper that provides discounted fares to passengers under 65 with qualifying disabilities. However, discounts vary by operator. SPUR recommends that the cost of a discounted single ride be consistent, with a single price for bus trips and single price for rail trips, regardless of operator. While this might not be feasible with the current Clipper technology, a consistent low-income discount can be achieved as part of the Clipper upgrade.

4. Understand users: Seek to better understand the needs, wants and preferences of low-income transit riders and potential riders prior to pilot implementation.

The study would benefit from a more robust exploration into the needs of low-income transit riders, such as how, when and why they use and don’t use transit; what they identify as barriers to transit use; and how they would prefer to access and use a discounted fare.

For example, the Means-Based Fare Study explores the San Francisco Municipal Transportation Agency’s Lifeline program for low-income riders, but only from the perspective of those who administer it. Lifeline participants are the ideal population to interview to understand the barriers, challenges and opportunities to accessing and using a low-income transit pass in the Bay Area. The insights gleaned though interviews with Lifeline participants (and program dropouts, if feasible) could help MTC understand how to optimally design and deliver a discounted fare program. MTC should also interview participants in the Santa Clara Valley Transportation Authority’s UPLIFT Program and incorporate learnings from the Alameda County Transportation Commission’s Affordable Student Transit Pass Program.

5. Design the means-based fare pilot to discover what we don’t know, and include a rigorous evaluation.

The pilot should be developed thoughtfully to test certain questions and assumptions, such as how to determine eligibility, whether the discount should be provided by geography or transit agency and how to manage the impact it will have on the amount of revenue captured through fares. The pilot should be developed with a specific goal in mind, such as to grow low-income ridership or ease the burden for current riders.

While addressing the high cost of long-distance transit is warranted, it’s important to note that this will not fully address the problem, as low-income riders would still have to pay in full for the first or last mile of their journey and could very well continue to be priced out of transit. Providing the discount on all transit services within a geography, as opposed to by individual transit operator, may be more helpful for those who have the greatest difficulty paying for transit.

We acknowledge that there are a myriad of factors that will determine the success of MTC’s low-income transit program. The program is attempting to reach a diffuse population with habits and lived experiences beyond the cost of transit that drive their transportation choices. Ultimately, the program can enable low-income individuals to change or adopt new transit behaviors, but behavior change takes time and is the product of a confluence of factors. To properly serve low-income riders, transit quality must also be addressed: Transit must meet their needs in terms of wait time, travel time, reliability and safety — just as it must for all riders.