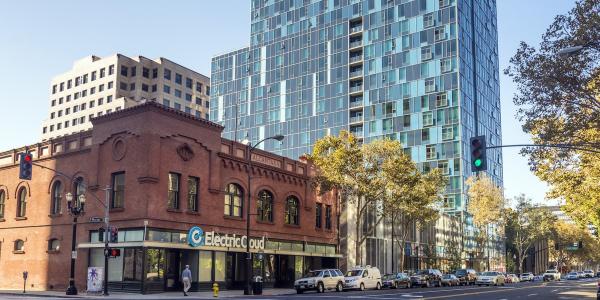 With its denser development, and plans for more, the western side of downtown San Jose is the better choice for where to put downtown's forthcoming BART station. Photo by Sergio Ruiz for SPUR

For decades, Santa Clara County residents have dreamed of extending BART to meet Caltrain in the South Bay, creating a rail connection between the downtowns of the Bay Area’s biggest cities. Now that Santa Clara County voters passed the Measure B transportation bond in November, that dream is getting closer to reality.

In the next few months, the Santa Clara Valley Transportation Authority (VTA) will work with its partners to refine the BART Silicon Valley project — making big decisions about where and how BART will come to San Jose and Santa Clara. San Jose will have stations at Alum Rock, Diridon and downtown. One of the big decisions is where, precisely, the downtown station should be located. The choice has been narrowed down to Santa Clara between Market Street and 4th Street (the “downtown west” option) or Santa Clara between 5th Street and 7th Street (the “downtown east” option).

So which one is better and why does it matter? 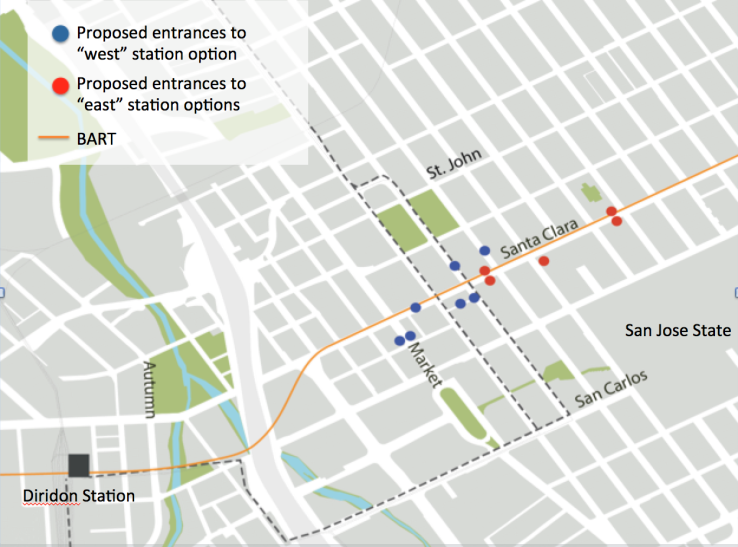 We think about BART as a 100-year investment. It has to be built to last, it has to be built in the right place, and it has to be surrounded by the right kind of growth (compact, walkable and mostly jobs). Luckily, we have 40 years of lessons learned from BART stations in San Francisco and the East Bay to draw on. For BART Silicon Valley to be successful, the downtown San Jose station location should be the one that will draw the most riders. SPUR strongly supports the “downtown west” option as the best choice for downtown San Jose.

A key purpose of extending BART to downtown San Jose is to reduce congestion by giving commuters an alternative way to get to their jobs. This is now more critical than ever. In California and the Bay Area, greenhouse gas emissions from transportation have far surpassed emissions from any other source. Our region’s economy continues to grow, and our housing shortage has pushed people farther and farther away from their jobs. Commuting is a daily crisis for many commuters, affecting the amount of time spent with families, worsening public health and lowering productivity. Encouraging people to use transit matters if we are to grow our region’s economy, and protect our environment and quality of life.

To meet these goals and make sure BART Silicon Valley is a success, we need a downtown station that will draw the highest number of riders. We believe the west option will deliver that.

Why the West Option Is the Better Choice:

The number of planned jobs near the west option far outpaces the planned jobs and housing close to the downtown east option. In anticipation of BART, San Jose is planning to increase the amount of jobs and housing around potential station locations. San Jose is planning to add 58,500 new jobs and 14,360 new housing units in downtown, but only 795 jobs and 850 housing units in the East Santa Clara Urban Village (between North 7th and North 17th streets).

2. It offers the best potential for new jobs and for commercial development. Transit and jobs have a mutually supportive relationship. Areas that are transit-rich are more attractive to employers, and transit that is located in jobs-rich areas enjoys more success (more riders and lower public subsidy). For example, a recent study found that two-thirds of all BART trips start or end at just four stations on Market Street in San Francisco — all of which are surrounded by a high concentration of jobs.

When BART is extended to downtown (and later, Diridon Station), downtown will be a highly transit-accessible employment location. This presents a significant opportunity for San Jose to position itself as an employment destination for residents of the East Bay, as well as for San Jose residents to access jobs and activities throughout the BART network.

An analysis completed by Strategic Economics for the City of San Jose found that improved transit access helps attract office tenants. Buildings located less than a half-mile from transit have higher occupancy rates than those farther away. Since most of downtown’s existing commercial buildings are located within half a mile of the downtown west station (and many of them are not fully occupied), we would expect higher occupancy rates there in the future. 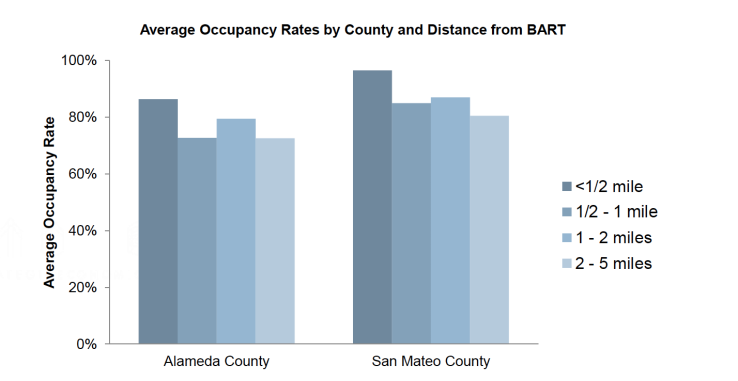 Occupancy rates in commercial buildings within a half mile of BART are higher on average than in those located farther away from BART. Source: Strategic Economics

The same study also observed that commercial developers typically prefer to build on large parcels. In the analysis, the city found that the area west of North 4th Street contains a much larger number of parcels over 1 acre than the area to the east of North 4th Street. Therefore, the downtown west station location is more favorable for filling up existing commercial buildings and supporting new commercial development.

3. It will be more likely to generate a lot of riders at all times of day and on weekends. Running trains costs money, and it costs more money when people aren’t buying tickets and filling seats. Today, VTA’s farebox recovery ratio — the percentage of operating expenses covered by passenger fares — is hovering at about 10 percent. Reducing subsidies will mean reducing the number of empty seats throughout the day. It will be easier to fill seats if the downtown BART stop is in a place that is within walking distance of lots of different, round-the-clock activities. The downtown west location has a greater concentration of destinations that attract people day and night on both weekdays and weekends, such as the San Jose Convention Center, San Pedro Square Market, the San Jose Museum of Art and others.

One argument for the downtown east option is its proximity to San Jose State University. The university is a valued downtown anchor, and many of its students also ride transit. The distance between the two options is about 0.2 miles, or a five-minute walk. For workers, those extra five minutes can make the difference between riding transit and not. Several studies have shown that people aren’t willing to walk very far from their office to transit (or vice versa), so putting BART close to where jobs are likely to grow is essential for capturing potential riders. For students, this extra five-minute walk will be an inconvenience, but students are still likely to take transit instead of driving, even if the station is a little bit farther away from their destination. Consider the fact that lots of UC Berkeley students trek the 0.8 miles between the downtown Berkeley BART station and the campus. We think that the opportunity to capture new riders by locating the downtown station to the west is greater than potential losses in student ridership.

4. It offers closer and more direct connections to buses and light rail than the downtown east options and would expand the usefulness of BART. The downtown west option provides quick, easy connections to light rail and buses at the First Street and Second Street transit malls. People could take light rail or buses to get to and from BART instead of driving to BART stations (which would also help to reduce the need for parking near stations). The availability of these transit connections makes BART more useful to people in San Jose and Santa Clara County who are already served by VTA’s light rail network. 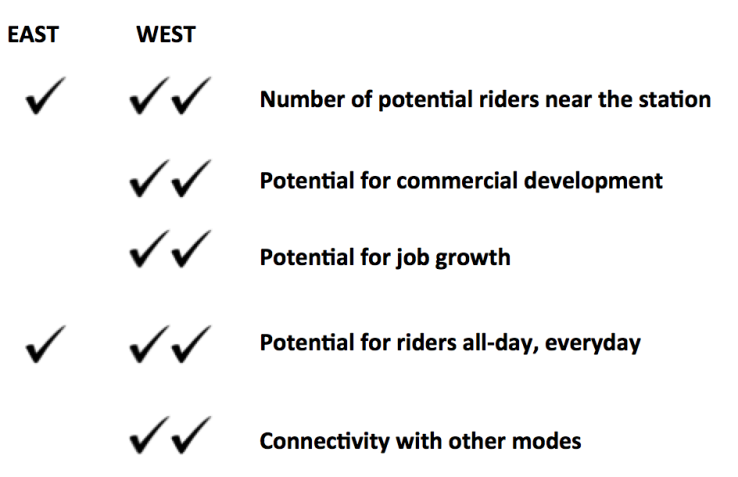 The west option for downtown San Jose BART outperforms the east option when it comes to the factors that get more people on transit and, in turn, make BART successful in its economic development, environmental and placemaking goals. Source: SPUR.

In the long run, building BART is about more than creating a “ring around the Bay.” It is about creating a useful, reliable and seamless system that connects the downtowns of our three largest cities. San Jose’s “downtown west” station option will do that by catalyzing new job growth in downtown, generating lots of riders, and offering simple and quick connections to other transportation services.