Holding the Line on Sprawl in Santa Clara County 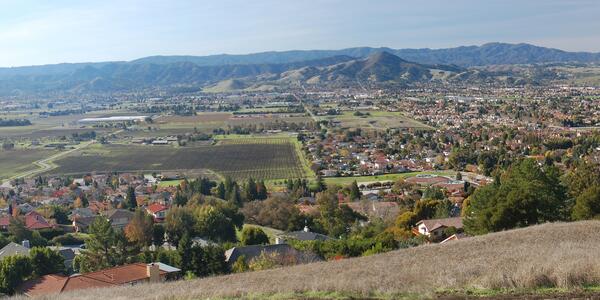 A view of the Southeast Quadrant, parts of which Morgan Hill has proposed to annex into its city limits, in 2012. Image by Flickr user adam_miguel.

Pressure for development at the urban edge of the Bay Area is growing. At the end of 2015, the city councils of Morgan Hill and Gilroy in southern Santa Clara County both proposed expanding their city boundaries. Their proposals — which would bring nearly 1,000 acres of what is mostly now unincorporated farmland under city control — have been described by county analysts as reminiscent of a bygone era. But they are an indication that landowners, developers and city officials still see a strong market for commercial and residential projects far from city centers. The fate of the proposals rests with the Santa Clara County Local Agency Formation Commission (LAFCO), which has the power to approve or deny changes to city boundaries. LAFCO will be considering Morgan Hill’s proposal on March 11, and the commission’s upcoming decisions will set an important precedent for the direction of Santa Clara County’s next phase of growth.

Morgan Hill is proposing to annex 229 acres of land in what is known as the Southeast Quadrant. Located south of the city and just east of Highway 101, it is an area whose future the city has been debating for years. As originally envisioned, the Southeast Quadrant includes 1,290 acres, but the Morgan Hill City Council decided that rather than propose a full annexation, it would proceed with a smaller piece first. Proponents of the annexation are seeking development on the land in the form of indoor and outdoor recreational facilities, retail and office space, hotels, a private religious high school and a gas station. Under current county zoning, this level of development would not be allowed. However, if LAFCO approves the annexation, the city would control the zoning and could choose which types of development are allowed. 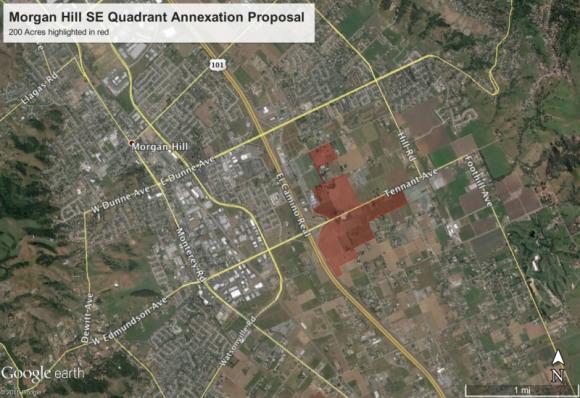 Morgan Hill has proposed to annex 229 acres southeast of its city center, the area highlighted in red. LAFCO considers this to be prime agricultural land. Map produced by SPUR.

The proposal for the Southeast Quadrant would develop some of the last remaining farmland in Santa Clara County. Recognizing this, Morgan Hill adopted an agricultural land mitigation policy that aims to preserve one acre of farmland for every acre that is developed. The mitigation policy, however, is inadequate. It will fall short of its aim because it allows developers to pay a fee to the city in lieu of directly purchasing easements to preserve agricultural land. The city has set the fee at $14,960 for each acre of agricultural land converted to non-agricultural use. However, a report from Morgan Hill city staff estimated the cost of agricultural easements at $30,000 to $48,000 per acre within Morgan Hill’s sphere of influence and $9,000 to $27,000 per acre near Gilroy. Those estimates were based on 2011 land values and have almost certainly increased in the intervening years. Based on these valuations, the city’s per acre in-lieu fee would not generate enough money to meet the city’s stated goal of preserving one acre of agricultural land for each acre that is developed.

In December 2015, the Gilroy City Council proposed annexing 700 acres north of the city to allow for the development of 4,000 homes. The council was split 4-3 in approving the annexation, which the city’s Planning Commission had unanimously opposed. Gilroy’s proposal was met with strong opposition, including a lawsuit from LAFCO and nearby landowners. In response, the city withdrew its proposal from consideration for the time being. While the proposal is off the table for now, Gilroy’s willingness to annex hundreds of acres for new residential development is a clear indication of the desire to continue pursuing city growth through greenfield development.

While SPUR supports the growth of the region and its cities, we oppose both Morgan Hill and Gilroy’s proposals. We firmly believe that growth in the Bay Area should occur within the region's existing urban footprint so that we can lessen our dependence on car travel. That is a central goal of SPUR's Agenda for Change and one of the goals of Plan Bay Area. Morgan Hill and Gilroy’s proposals would take the region in the opposite direction.

In addition to undercutting efforts to focus growth into existing urban areas, this proposal would also lead to the development of large areas of the county’s remaining farmland. As we highlighted in our 2012 report Locally Nourished, loss of significant areas of contiguous agricultural land threatens the continued viability of the local food economy. According to an analysis conducted by LAFCO staff, the entire 229 acres proposed for annexation qualify as prime agricultural land.

More broadly, as the LAFCO staff report on the proposal notes:

“The proposal in many ways is a classic example of the type of urban sprawl and unnecessary/premature conversion of prime agricultural lands that was prevalent in the county during the 1950s and 1960s. Such projects and concerns were the impetus for the State Legislature’s creation of LAFCO in 1963 and for the local adoption and use of city [urban service area] boundaries as a key planning and growth management tool since 1972.”

The annexation proposals could also hinder efforts to establish a county-wide framework for conserving farmland and ranchland. The Santa Clara Valley Open Space Authority and County Planning Department, using grant funding awarded by the state’s Strategic Growth Council, have just begun the development of a Sustainable Agricultural Lands Policy Framework that will provide a comprehensive preservation plan to protect the farmlands most at risk in southern Santa Clara County. In addition to establishing a well considered set of policies for the county’s agricultural lands, this planning grant additionally could help position the county to receive a portion of the nearly $40 million the state recently decided to allocate to local jurisdictions for agricultural land preservation easements. Should this annexation proposal be approved, however, it would likely jeopardize the county’s chances of securing any of those funds.

SPUR will be tracking this issue closely and speaking in favor of accommodating the region’s growth within existing urban boundaries rather than increasing city footprints. Continuing a pattern of sprawl development in the Bay Area will increase our region’s greenhouse gas emissions, undercut the vitality of downtowns and reduce the viability of our local agricultural economy. We’ve seen the result of decades of this type of development and, as a region, we need to make sure we don’t repeat our past mistakes.