Can a New Law Free Cities From Car-Oriented Development?

By Libby Nachman and Ratna Amin 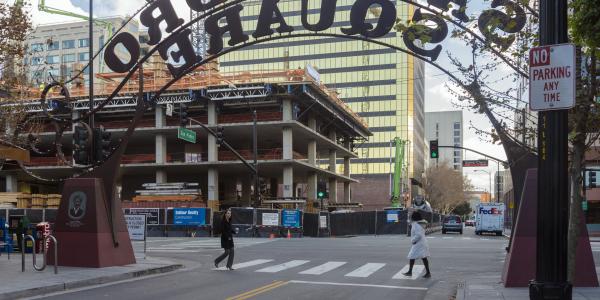 Requiring thresholds for traffic flow has limited the ability to build infill development in California cities. The City of San Jose passed a resolution to exempt its downtown from these thresholds. A new state law will provide additional flexibility. Photo by Sergio Ruiz for SPUR.

It’s been decades since urban planners started advocating for street and building design to prioritize humans over vehicles. So why is it taking so long to retrofit our car-oriented cities to make them more walkable and bikeable? In part, it’s because of an antiquated engineering concept called “auto level of service” or LOS. Here’s how LOS came to control our built environment — and what the State of California is doing to release the hold this little-known metric has had on our cities.

In use since the mid-20th century, when car use was on the rise, auto level of service (LOS) measures whether cars are delayed when traveling through an area. For years it has been the primary tool for measuring the impact a new development project will have on transportation: Will adding new housing, jobs or retail cause traffic congestion? This exclusive focus on auto LOS — without any complementary metrics to measure impacts on transit, walking or biking — has resulted in accommodating cars at the expense of other transportation modes and has made building infill projects more difficult. (More on this in a minute.)

Reforming LOS — or replacing it — has been seen as essential to enabling dense, well-designed infill development to thrive. Advocates for smart growth and streets that accommodate walking, biking and transit have been calling for its repeal for years. LOS is a major component in how the California Environmental Quality Act (CEQA) evaluates the environmental impacts of a new project. Ironically, this emphasis on what’s best for car traffic has put transportation impact analysis under CEQA at odds with the state’s environmental goals.

Senate Bill 743, signed into law by Governor Jerry Brown last fall, aims to reform LOS. The bill identified the conflict between LOS and environmental impacts and asked the Governor's Office of Planning and Research (OPR) to amend the CEQA Guidelines and provide alternative metrics to LOS that “promote the reduction of greenhouse gas emissions, the development of multimodal transportation networks, and a diversity of land uses.” The OPR will choose a new metric specifically for Transit Priority Areas within one-half mile of high-frequency transit, and a new metric may be chosen for state-wide use. SB 743 also included other clauses that would reform CEQA or provide LOS relief for projects in infill or transit-oriented locations.

What’s the Problem With LOS?

As we shift from car-oriented cities to places focused on multi-modal transportation, the relevance of auto LOS in its current state is no longer so clear. Its place in CEQA is even more questionable, considering it focuses primarily on the motorist experience and less on environmental impact. Auto LOS measures vehicular delay (in seconds) at intersections or on street segments during peak hours, then assigns an A-F letter grade. Areas with unfettered free-flowing traffic receive high marks, while areas that experience slower auto trips are rated lower. Software models are used to estimate what the delay will be, but both the methodolgy and the data used are known to be imprecise.

Projects that could lead to streets not meeting a minimum auto LOS threshold (usually set by the city where the project is located) must mitigate their impacts, typically through actions that will increase auto capacity such as widening streets at the expense of sidewalks and pedestrian crossing distances. Many mitigation strategies used to address LOS impacts actually have negative environmental impacts: Streets that are better designed for cars tend to implicitly encourage more automobile trips, while also discouraging more sustainable transportation options such as public transit, biking and walking. A notable example of this is when the San Francisco Bicycle Plan was held up for years in litigation because of its estimated auto LOS impacts.

LOS also disincentivizes infill development, because these types of projects disproportionately push traffic levels above LOS thresholds compared to projects in less developed areas. LOS estimates, which often focus on worst-case scenarios for drivers, can contribute to neighborhood opposition to an infill project.

What Are the Alternatives to LOS?

If we diminish the importance of LOS, or eliminate it altogether, what are more effective strategies to measure a project’s environmental impacts due to changes in the transportation system? OPR proposed and analyzed six alternative metrics in its Preliminary Evaluation, which was published last December for public comments:

Of all the candidates, VMT received the most attention from public comments, with wide support for use in Transit Priority Areas and mixed support for use beyond these areas. Proponents feel that this metric better correlates to environmental impacts, is consistent with state and regional goals, could positively influence other transportation planning practices and is already in use in other analyses, which would make implementation easier. Concerns around VMT point to its validity when modeled, data availability, lack of methodology to connect results to on-the-ground improvements and possible duplication of other analyses.

There was also limited support for ATG and MMLOS, but many pointed out that these two metrics have similar shortcomings to LOS. ATG does not take into account factors such as trip length, so it overlooks regional impact and therefore could be less effective than other metrics. And, like auto LOS, MMLOS penalizes projects that increase crowding. Location-based presumptions received mixed support, while there was little support for fuel use or VHT. VMT will most likely be the metric moving forward in OPR’s draft guidelines.

The OPR is aiming to meet a July 1 deadline to send final draft guidelines to the California Natural Resources Agency. Following a comment period, the CEQA guidelines will have to be certified and adopted by the Secretary for Resources before their use will be mandated.

There will be growing pains: cities and other public agencies will each have to update their CEQA process to reflect the new guidelines and develop a methodology to estimate VMT of projects. Some cities have already begun to replace LOS; San Francisco’s Transportation Sustainability Program is moving forward with the elimination of LOS and is researching an alternative transportation metric. San Jose passed a resolution in 2005 to exempt intersections in its downtown core and other specific project areas from its city-wide auto LOS thresholds.

While there are numerous reasons to reform LOS, many cities in the region may continue to support its use. Some fear that moving away from LOS would require costly new models that smaller municipalities do not have the resources to maintain or that removal of LOS would eliminate an important tool for rural areas that are not well-served by transit or other multi-modal forms of transportation. However, SB 743 only removes LOS from CEQA analysis and does not eliminate it as a planning metric for other analysis purposes. Outside of CEQA, LOS could still continue to be incorporated into city traffic analysis or programs in localities that choose to use it. Furthermore, LOS is still required by the state’s congestion management laws. But ideally it should be incorporated with other performance measures and should no longer by the sole indicator of success. LOS itself isn’t the problem; it’s how we decide to act on what we learn from an LOS evaluation.

LOS works exactly for what it was designed to do: evaluating vehicle delay. But decades of data illustrate how LOS success does not align with success in achieving CEQA and environmental goals. By changing this simple measure, LOS reform has the opportunity to reinforce positive changes across the region that result from infill development and multimodal streets. We can reduce greenhouse gas emissions, improve local air quality and increase mobility for all forms of transportation, not just cars.

Get updates on changes to CEQA Guidelines >>