San Francisco is experiencing another remarkable growth year, led by the tech sector.

The talk of this year’s briefing was the sustained and exceptional growth of the local economy. San Francisco has become the fastest growing large county in the United States, with a 6.1 percent increase in employment from 2011 to 2012 (triple the national growth rate of 2 percent). The city has fully recovered to pre-recession employment levels. All major industries are growing at rates that outpace the rest of the state and country.

This growth is led and driven by the tech sector. While still a relatively small industry, tech has accounted for 30 percent of San Francisco’s job growth since 2010 and has grown as a portion of the local economy from just 1 percent in 1990 to 4 percent in 2010 to an estimated 8 percent at the end of 2013. The tech sector has also become a major player in the San Francisco office space market. In 2012, tech companies accounted for 61percent of new office space leased in San Francisco, moving into more than 6 million square feet — a new historical high for leasing of space in one year. By the end of 2013, tech companies occupied fully 22 percent, or 15.5 million square feet, of San Francisco’s total available office space. The “multiplier effects” of the tech industry’s footprint — the additional activity it creates in the local economy — are responsible for virtually all of San Francisco’s local employment growth since 2010. 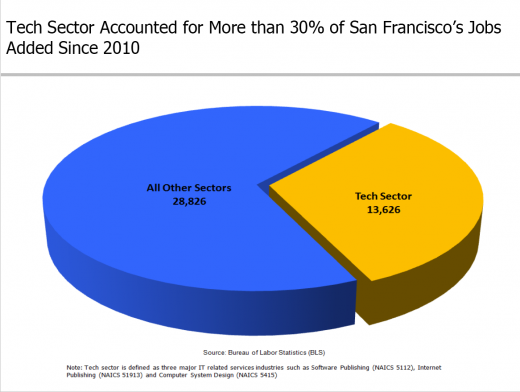 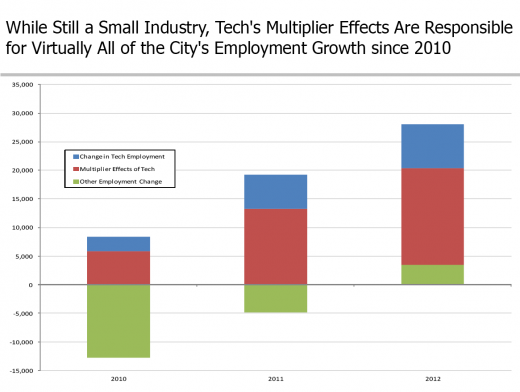 The booming economy means increased revenue for the city.

San Francisco gets the majority of its general fund revenue from property tax, business tax, sales tax, hotel tax and transfer tax. All income sources are projected to grow this year as increases in home values, business growth and hiring, more visitors, retail sales, and people moving to and investing in the region each contribute to the city’s coffers.

City staff members presented their initial assumptions for receipts in 2014-15 across each of the major categories of revenue. Feedback from the experts assembled was mostly optimistic. In fact, several found the city’s projections of revenue overly conservative considering the wealth flowing into the city.

The stabilization of the city budget at nearly $8 billion dollars — up $1.5 billion in the three years since its recession low — is a remarkable thing. It provides San Francisco the opportunity for investing in improved services and enhanced infrastructure.

Fears of another tech bubble are unfounded.

The remarkable growth in the tech sector has prompted apprehension of a bubble like the one that preceded the 2001 dotcom crash. The experts at the briefing did not find that scenario likely. Ted Egan, the City’s Chief Economist, points to the more reasonable tracking of share prices with company revenues, called the price-to-earnings ratio. In 2001, speculative investors were paying top dollar for shares in companies that had no revenue, betting that the earnings would go up or, more often, that they could turn around and sell the share for even more. Today, the price-to-earnings ratio is an order of magnitude lower and tracks more reasonably with future growth expectations. 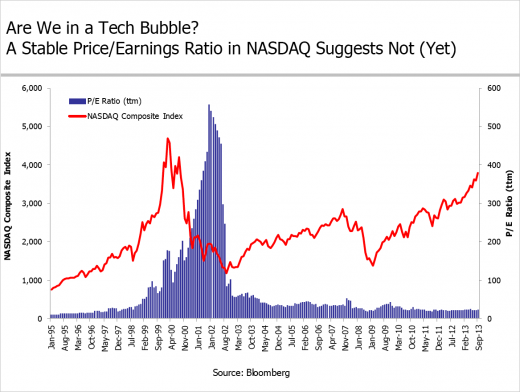 San Francisco’s tech economy also has a different blend of companies today than it did in pre-crash 2001. Today’s tech companies are more mature, less reliant on venture capital and structured to weather market cycles. Consider the difference between established companies like Google, Apple and Facebook as compared with start-ups of the dot-com boom like boo.com and Webvan.

The future is likely to hold sustained, moderate growth.

Economists are hesitant to predict the future more than 18 months out, but those present at the briefing concurred with the modeling of City of San Francisco Chief Economist Ted Egan, who forecast that the next few years would see a continuation of growth in the local tech sector, albeit at a somewhat slower rate than that seen in 2011 and 2012. As has been the case in the past several years, this will be accompanied by relatively rapid increases in housing prices, and somewhat weaker increases in wages for most workers.

Most present predicted that 2015 would bring new highs in employment, wages, occupancy and rents but that none of the next few years would approach the record growth rates of 2011 and 2012.

The overall picture is optimistic for the Bay Area. As most of the country and world is still struggling with lackluster growth out of the great recession, San Francisco has a thriving, exporting tech industry that is driving growth across the rest of the local economy. Unemployment is down, wages are up and there doesn’t seem to be any risk of external factors like inflation, the cost of capital or federal policy affecting the trend in the near term.

In the long term, however, the Bay Area’s prosperity is threatened by internal risks in the areas of housing, education and transportation. In particular, the high cost of housing is likely to become a barrier to growth; if businesses can’t find space, can’t attract the workers they need and can’t pay the high costs of doing business in the Bay Area, they will choose to locate elsewhere. The high costs of housing and commercial rents are already choking weaker sectors. Manufacturing, retail and wholesale trade jobs continue to leave San Francisco. The Consumer Price Index, a measure of consumer purchasing, is not growing along with the rest of the economic indicators — it’s going down. This is unusual for a growing economy and potentially a sign of a future cool down.

Thank you to the San Francisco City Controller’s Office and the many consultants who contribute their expertise to help the city develop its budget.