A Future for Farming in the Coyote Valley? 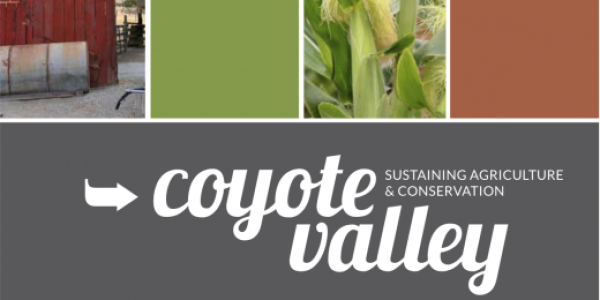 Southern Santa Clara County used to have a widespread and thriving agricultural sector, helping the area earn the name “Valley of the Heart’s Delight.” Today, much of that famed farmland has been replaced with homes and offices. One exception is the Coyote Valley, a narrow, 5-mile-long area between southern San Jose and Morgan Hill. Before the recent economic downturn, much of Coyote Valley was slated for development, and intense land speculation had driven up property prices. After 2008, however, local open-space and agriculture advocates saw a sharp drop in the development pressure and wondered whether it would be economically feasible for Coyote Valley to retain its agricultural character.

That question led Sustainable Agriculture Education (SAGE) to conduct an in-depth feasibility study over the past eighteen months. In its report, Coyote Valley: Sustaining Agriculture and Conservation, SAGE concludes that an agricultural economy is feasible for the area if significant investments in land, infrastructure and policy are made in the next 25 years. The report outlines a three-phase strategy that would split a $50 million investment between: 1) agricultural land preservation, mainly through purchasing conservation easements on existing farms; 2) infrastructure, including updating and expanding irrigation in the valley; and 3) program coordination and marketing. The report envisions that a new entity, the Coyote Valley Agricultural Enterprise and Conservation Program, would work to implement the strategy using funds from both public and private sources.

In addition to presenting an ambitious vision, the study is notable for recommending an agricultural preservation strategy that anticipates integrating farming into a “mosaic” of other land uses. Rather than propose the creation of one large contiguous block of farmland, the study recommends the preservation of at least 50 percent of the existing farmland throughout the north, middle and southern sections of Coyote Valley, interspersed with clusters of residential and commercial development. The study also presents an incredibly detailed assessment of current opportunities and challenges such as: vast acreage in the valley currently owned by developers who currently have little interest in leasing long-term to farmers; the potential to increase the value of production by 300 percent by changing what crops are planted; and initial indications that policy and overall trends in the real estate market are easing development pressure in the area.

SAGE’s report on the Coyote Valley is a fantastic case study of urban-edge agriculture. It shows that the opportunity to retain and expand a self-sustaining agricultural economy that provides food and livelihoods in Southern Santa Clara still exists. But the report also makes clear that, as in many parts of the Bay Area, the opportunity will slip away unless policymakers, farmers and food-system advocates focus their energy on shifting the Coyote Valley in a new direction.