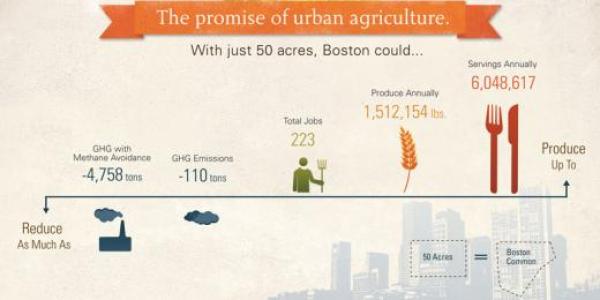 A study from Boston examined the potential benefits urban agriculture could bring to the city. Image by Conservation Law Foundation

There may be a drought in much of North America, but this summer has produced a bumper crop of reports on urban agriculture in cities across the continent. Nonprofit groups in New York, Toronto and Boston have recently published studies examining what their cities can do at the policy level to support city gardeners and farmers.

In the Big Apple, the Design Trust for Public Space and Added Value partnered together to produce Five Borough Farm: Seeding the Future of Urban Agriculture in New York City, the most comprehensive of the reports. The study’s snapshot of urban agriculture revealed:

An innovative aspect of the report was its call for the city and urban agriculture practitioners to provide more detailed metrics — not only to track production (in pounds of food, value, jobs and participation) but also to track impact (dietary change, food literacy and social cohesion). In the coming year, the Design Trust will begin working with a small sample of sites to collect this sort of data, similar to the work of Farming Concrete.

One other notable aspect of the New York City report was how the history of land insecurity, specifically former mayor Guliani’s attempt to auction off 115 community garden sites for private development in 1999, led to a very specific garden review process for any future transfer proposals. It also led to the establishment of a small handful of land trusts — including the New York Restoration Project and three smaller community trusts that were recently spun off by the Trust for Public Land — that own scores of community garden sites. In contrast, there are no community land trusts operating urban agriculture projects in San Francisco.

Providing an international perspective from a colder clime, Toronto’s Food Policy Council published GrowTO: An Urban Agriculture Plan for Toronto. The goal of this enthusiastic report was to scale up urban agriculture across the city. Reflecting the similarities that dense cities face on this issue, the four top policy recommendations from Toronto are similar to those SPUR identified for San Francisco:

1.     Create an urban agriculture program within the City of Toronto.

3.     Provide incentives (financial and/or other) to groups and individuals starting or growing their urban agriculture initiative.

4.     Develop a website that provides a clearinghouse of urban agriculture information.

The report also highlighted a “yard sharing” initiative called YIMBY (Yes in My Backyard), a model of maximizing use of private yards that has not been institutionalized yet anywhere in the Bay Area.

Not to be outdone by bigger cities, researchers from the Conservation Law Foundation in Beantown issued their report Growing Green: Measuring Benefits, Overcoming Barriers, and Nurturing Opportunities for Urban Agriculture in Boston.  Unlike the others, this report was framed as a feasibility study for a hypothetical commercial urban farming venture that would cultivate many sites across Boston, totaling 50 acres. Two notable findings in the study were that:

Alongside its feasibility analysis, the report provides detailed descriptions of existing policy and initiatives in the city, including an urban agriculture zoning overlay district. Unaddressed, however, was whether that zoning policy, or any other policy change, would make it feasible for any urban agriculture venture to gain access to 50 acres of land.

What the three studies show is both a growing sophistication of urban agriculture policy efforts in cities across the continent and the similar obstacles facing farmers and gardeners in dense urban areas. What is not yet clear is whether the bumper crop of studies will lead to subsequent bumper crops of food produced in those cities.