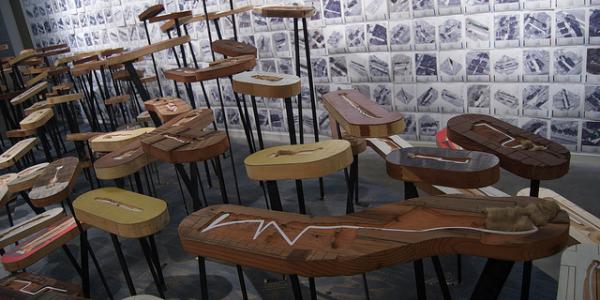 The City of San Francisco owns 1,625 parcels of unmaintained paved land, odd alley-like spaces behind industrial buildings and beneath overpasses. Most are no wider than a city street, but together they have a combined surface area half the size of Golden Gate Park.

That’s a lot of city-owned land just sitting there collecting plastic bags. Their shape, size and location — often alongside highways or near industry — make these leftover lots unusable for traditional development. But what if there was a way to reclaim them for public use?

That’s the question UC Berkeley architecture professor Nicholas de Monchaux asks with his project “Local Code: Real Estates,” on view at the SPUR Urban Center gallery through April 20. Inspired by the artist Gordon Matta-Clark’s “Fake Estates” project from the 1970s, de Monchaux has proposed a reinvention of these spaces as a hybrid of public park and public infrastructure.

For “Fake Estates,” Matta-Clark spent three years combing public records to find 15 abandoned sites in New York City. Thanks to today’s GIS (geographic information systems) technology, de Monchaux and his students were able to identify a remarkable 1,625 sites in San Francisco using a database maintained by the Department of Public Works. The exhibit lays out a detailed proposal for the adaptive reuse of more than 1,000 of them, each tailored to local conditions. In an interview with the New York Times’ Allison Arieff last year, de Monchaux called the sites “a whole archipelago of city-owned lots lying fallow.”

Though the proposals call for removing pavement and replacing it with vegetation, these aren’t simply parks; they’re primarily a means to improve stormwater retention and air quality and mitigate the heat-island effect, the temperature rise that asphalt and buildings bring to highly developed areas. In a talk at the exhibit opening, de Monchaux pointed out that these abandoned sites appear most frequently in underserved and low-lying areas where asthma and crime rates are high and drainage is poor: exactly the kinds of places that most need intervention.

In the gallery space, de Monchaux represents these plans in two ways. First, 8.5-by-11 reproductions of the 1,000-plus plans paper the walls from floor to ceiling. Second, he has built scale models for more than 200 of them. Carved from salvaged doors by a CNC router and mounted on metal posts, the models describe a landscape of creative reuse that transforms the city’s leftovers into integral parts of a connected whole.

Perhaps the most compelling piece in the exhibit is a map of existing funding that De Monchaux says could be diverted to build out all of the proposals. One of his boldest assertions is that his plan would eliminate the need for new stormwater-retention infrastructure: San Francisco could save more than half a billion dollars by remediating these odd lots instead.

The project was a finalist in the WPA 2.0 competition sponsored by UCLA Citylab and also appeared at the 2010 Biennial of the Americas.

Watch a video of what these reclaimed spaces might look like:
Nicholas de Monchaux’s Local Code: Real Estates