Jarrett Walker of Human Transit has an intriguing post comparing transit ridership in American cities to those in Canada. As you can see in the chart below (based on these data), Canadian cities seem to have higher transit usage than American metro regions of similar size (the points on the chart are all based on metropolitan areas, not central cities). 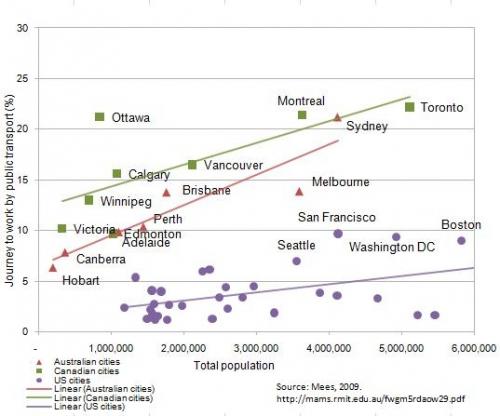 There's been a lot of speculation over at Human Transit as to why this might be, as the reasons aren't immediately obvious. Canada and the US are similarly wealthy places, and built their cities at similar times, unlike much older European metros. The type of transit offered also doesn't stick out as a key driver — San Francisco, DC, and Boston all have robust rail options, and still have a much lower transit share than Canadian counterparts.

Digging a little, it seems that the disparity is largely driven by the suburbs. If we look only at central cities, the gap seems to shrink. In fact, the percentage of people riding transit to work is higher in some American cities, as shown in the table below:

So why are Canadian suburbanites more likely to ride transit than Americans? The original data aren't granular enough to really dig in, but a few possibilities come to mind. For one, Canadians pay more to fill up their gas tanks: the current average price in Canada is about $4 per gallon, compared to $2.81 in the US. This premium has persisted for a while, and may have helped to counteract sprawl, especially the employment sprawl that generates auto trips in the US. The numbers might also point to successes in Canadian land-use policy like Ontario's Places To Grow program, which channels development into suburban downtowns and away from the exurban fringes. Either way, American advocates might want to spend more time looking north of the border, and thinking about how we can import some of that ridership.