Building a Better Future for the Region 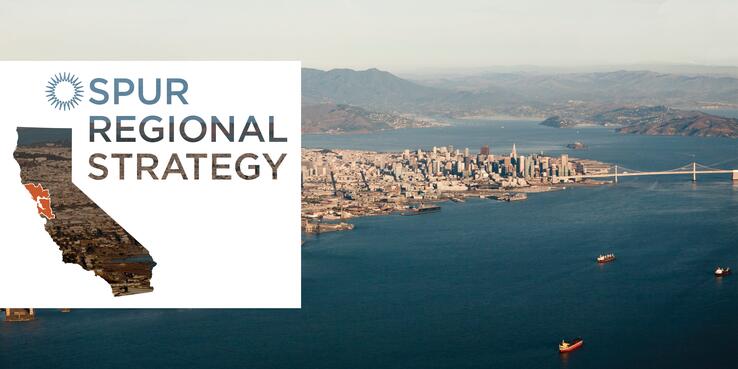 The San Francisco Bay Area is one of the world’s most innovative and progressive regions, but we face enormous challenges, from the cost of housing to the threat of sea level rise. Three years ago, SPUR undertook an initiative to envision a more equitable, sustainable and prosperous Bay Area for all — and propose the bold strategies necessary to get there. The result, the SPUR Regional Strategy, comprised of two dozen policy reports and over 170 recommendations, will be released today, providing a clear vision for the region's next 50 years. Come learn about this enormous effort and, more importantly, ask any questions that you might have about how we can build the future that we want.

Nick Josefowitz is the Chief Policy Officer at SPUR, where he manages the policy team, responsible for developing and advancing powerful policy ideas across sustainability, resilience, housing and transportation in San Francisco, Oakland, San Jose and across the Bay Area. Nick served as a BART director and is currently a commissioner for the Metropolitan Transportation Commission.

Sarah Karlinsky is SPUR’s Senior Advisor and an expert in housing and land use policy. She is the author of numerous SPUR reports, including SPUR's recent Housing the Region series, "What Will it Really Take to Create an Affordable Bay Area", "Room for More", "Safe Enough to Stay" and others. She has worked in many capacities at SPUR since 2005 and prior to that developed affordable housing throughout the Bay Area.

Laura Feinstein is SPUR’s Sustainability and Resilience Policy Director, leading SPUR’s work on climate mitigation, adaptation and environmental justice. Previously she worked as a senior researcher at the Pacific Institute, a research scientist and project manager at California Council on Science and Technology, and a fellow with the California Senate Committee on Environmental Quality.

Laura Tolkoff is SPUR's Transportation Policy Director. She believes that a sustainable transportation system is the scaffolding for a society that cares for the environment, that embraces public life, and that is healthier, more just, and more prosperous. Laura is an American Leadership Forum senior fellow and was named to Mass Transit magazine's "Top 40 under 40" in 2019.

Jacob Denney is SPUR’s Economic Justice Policy Director, leading the organization's work to address the region’s economic inequity and develop an agenda for shared prosperity. Growing up in a working-class Puerto Rican family, Jacob learned early on the importance of creating effective government policy to help build economic security for all people.

Susannah Parsons is a Senior Policy Associate at SPUR. She works across several of the organization's policy areas, with a particular focus on climate change and economic justice research and advocacy. Prior to her current role, she led special policy projects on behalf of the CEO, managed grants and facilitated SPUR’s large group workshops and programs.

Michelle Huttenhoff is the Planning Policy Director at SPUR, leading policy and research initiatives that focus on community planning and public space, including a multi-year research project to inform the future of San José’s largest urban green space, Guadalupe River Park. Michelle has focused both her academic and professional career on how investment in place can increase economic opportunity and social resilience.

Benjamin Grant is a planning and urban design consultant in San Francisco and has been a lecturer in urban design at San Jose State University. Benjamin is SPUR’s former Urban Design Policy Director where he led numerous reports including Model Places: Envisioning a Future Bay Area With Room and Opportunity for Everyone and the Ocean Beach Master Plan, a climate adaptation strategy for San Francisco's open coast.

Laura Tam is a Program Officer at the Resources Legacy Fund, and is responsible for the development and implementation of conservation and climate resilience programs, working with community groups, nonprofits, public agencies and other stakeholders. Previously, she was the Sustainable Development Policy Director at SPUR, where she led policy work and advocacy on water, energy, climate change and adaptation.

Find more Digital Discourses about the SPUR Regional Strategy, leading up to its release on May 13: