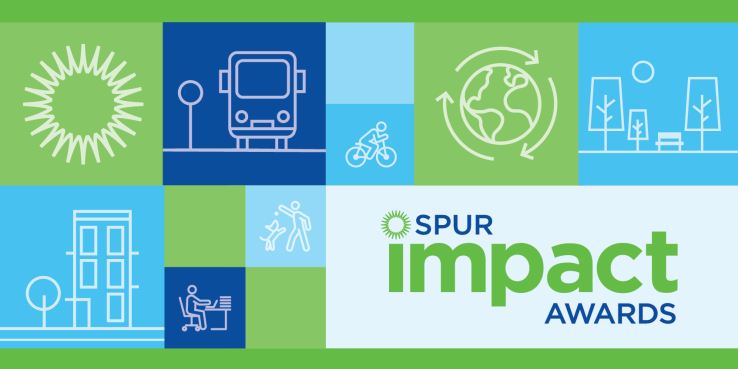 Thank You for Supporting Good Government in San Jose!

In keeping with the latest guidance from the Santa Clara County Public Health Department to postpone or cancel mass gatherings and large events, SPUR has decided to cancel our 2nd annual SPUR Impact Awards. This event is intended to recognize and celebrate excellence in public service in our county, and certainly our Public Health Department is modeling that excellence in dealing with the COVID-19 outbreak.

We are disappointed that we were not be able to celebrate our honorees in person, however, you can view the video celebrating this year's SPUR Impact Award honorees and showcasing the tremendous work that they do.

Congratulations to the 2020 Impact Honorees:

Senator Jim Beall brings a lifetime of experience and understanding in transportation, housing, and government efficiency to the State Senate.
In three decades of public service – which includes serving as a San José City Councilman, a Santa Clara County Supervisor and a legislator in the Assembly – Senator Beall has left his mark across Silicon Valley and beyond.

In 2017, Senator Beall, Chairman of the Transportation and Housing Committee, was a pivotal figure in unraveling two of California’s toughest problems: repairing a crumbling transportation infrastructure and building affordable housing to enable more Californians can live in the communities where they work. His solutions will also create and sustain jobs to keep the state’s economy growing.

Senator Beall’s Senate Bill 1 updates the state’s outmoded road repair funding system by providing a dedicated, accountable stream of funding to repair aging roads and bridges. Over a 10-year period, the bill pumps over $52 billion into repairs. It also dedicates $7.5 billion to expand and improve mass transit systems and projects, such as extending BART to San José.

Ms. Garcia provides leadership and oversight for homelessness and affordable housing programing, including the Below Market Rate Program, for the City of Morgan Hill. She led the efforts to put in place the inclusionary housing policy to mitigate the impacts of new market rate housing and assist the City to meet its share of the Regional Housing Needs Allocation and the Housing Element of the General Plan.

Ms. Garcia understands the unique needs of small cities and improves the effectiveness of Morgan Hill’s housing programs through partnership building. In collaboration with the police department, Santa Clara County and the faith-based community, she was instrumental in the creation of a Homeless Safe Park Program, providing shelter for homeless populations. She also confronted the challenge of funding for affordable housing. In collaboration with EAH Housing and Santa Clara County, Ms. Garcia helped to facilitate financing and the beginning of construction for the 3 Scattered Site, a 41- unit affordable housing development which will house lower income families, individuals, and transitional aged youth who are aging out of the foster care program.

Ms. Garcia has expanded her efforts beyond the City of Morgan Hill as a collaborator on the County of Santa Clara’s five-year Community Plan to End Homelessness. Ms. Garcia’s effectiveness has resulted in higher client satisfaction, better-leveraged resources, and a culture of striving for continuous improvement.

Viva CalleSJ Open Streets Program temporarily transforms six to seven miles of San José’s roads into a car-free park. The program nurtures social integration and connects communities across the city by bridging social, economic and geographic divides. This approach to community building allows San José to view public spaces and resources in a drastically different light. Disregarding traditional ideologies of what parks or recreation services should be, the City can take the largest shared space and transform it into a park filled with life, creativity and community resources.

Attendance has grown from 35,000 in 2015 to 145,000 at the May and September 2019 programs with people of all ages and abilities enjoying walking, biking, and exploring San José. This growth serves as evidence of the program’s ability to inspire our community members to explore the city and view its public spaces in a new light.

In response to the impacts of climate change, the City of San José adopted a Paris Climate Agreement-aligned climate action plan, Climate Smart San José. Approved by City Council in February of 2018, Climate Smart’s goals include all new residential (by 2020) and commercial (by 2030) buildings be zero net carbon, 1 gigawatt solar installations by 2040, and 61 percent of passenger vehicles be electric by 2030.

To meet the goals of Climate Smart San José, the Building Reach Code team created new building requirements to further building electrification and now requires electric vehicle charging infrastructure (EVCI) and solar readiness for new construction projects in San José. With the City’s approved reach code ordinance and its natural gas ban ordinance—which together incentivize or require all-electric construction, depending on the building type—the City can eliminate an estimated 897,000 tons of greenhouse gas (equivalent to 1.7 trillion car miles driven) over the next 50 years.

Supported by a connected goal of achieving 100 percent carbon-free base power from San José Clean Energy by 2021, the City adopted a building reach code focused on building electrification, EVCI, and solar readiness to address all three of these stated goals and metrics within the City’s timeline. San José is the first major U.S. city to require that new buildings be gas-free.

CommUniverCity SJSU is a three-sector partnership with the community (“Comm”), San Jose State University (“Univer”) and the City of San José (“City”). The Community Planning team for CommUniverCity organizes and implements a year-long engagement project with underserved neighborhoods in San José. The team includes SJSU graduate students pursuing Master’s degrees in Urban Planning, along with their faculty advisors and facilitators from CommUniverCity SJSU. Using community planning principles, the team works with local residents, key stakeholder groups and other partners to identify neighborhood assets, challenges and opportunities. This information leads to creation of a professional quality planning report at the end of every academic year that the community can use to advocate for its top priorities.

Today, we had planned to host the second-annual SPUR Impact Awards to recognize unsung public sector leaders in Santa Clara County’s cities and countywide agencies. While COVID-19 may stop us from celebrating in person, it can’t diminish the accomplishments of this year’s honorees — or the critical work public employees continue to do in the face of this pandemic. In fact, we are pleased to share information about an innovative and timely countywide response to COVID-19, SiliconValleyStrong.org. This online hub provides critical updates and resources for vulnerable neighbors.

SPUR believes in local government as a force for good. From providing housing for all to innovating climate-smart solutions, public servants are at the heart of what makes cities great. Please take a moment to listen to the inspiring stories of the 2020 SPUR Impact Award winners and learn about their ingenuity and determination in promoting the public good.

Ed Solis Transforms Streets Into Public Space for Everyone

Rebecca Garcia Helps Provide Housing and Shelter for All

We thank the many sponsors and ticket purchasers who stand in support of SPUR and this virtual event. Your commitment ensures that we can acknowledge leaders of impact inside government and those working alongside them in the community.

Watch the event video below!