The Municipal Fiscal Advisory Committee (MFAC) is pleased to host the 31st annual Good Government Awards on March 21, 2011. This event has evolved over the last three decades, but its purpose remains the same: to recognize and acknowledge exemplary job performance and leadership by San Francisco City employees.

Event chair Michael Walker, President of U.S. Bank of Northern California, City department heads and the Mayor of San Francisco will present a select number of outstanding City employees with the distinguished Public Managerial Excellence Award. The event will include a hosted reception, and present sponsors with the opportunity to meet with City department heads, members of the Board of Supervisors, other elected officials and business and community leaders in an informal atmosphere. In addition, all former San Francisco mayors are being invited to join the current mayor that evening.

Contact SPUR for more information about sponsorship opportunities for this year's Good Government Awards, 415-644-4288 or events@spur.org. 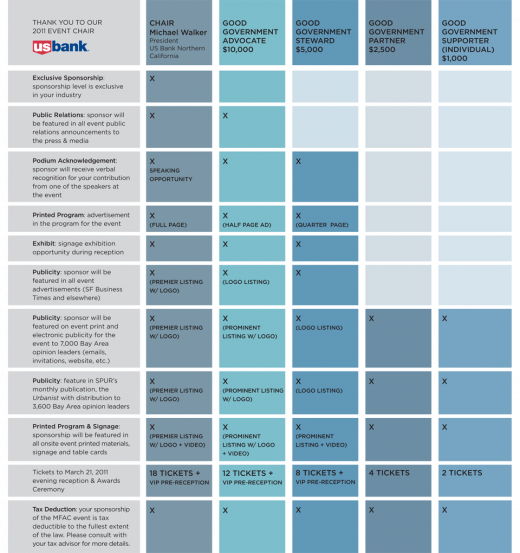 Contact SPUR for more information about sponsorship opportunities for this year's Good Government Awards, 415-644-4288 or events@spur.org 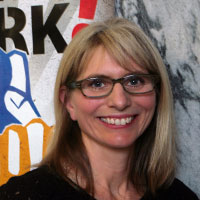 Why she was selected: In recognition of her vital role in the City, her leadership in developing the City's Infectious Disease Response Plan and for her exemplary response to the 2009 outbreak of the H1N1 Influenza, Dr. Susan Fernyak has been selected for a 2011 MFAC Public Managerial Excellence Award. Dr. Fernyak's response to the H1N1 epidemic was not only an exceptional response for the City and County of San Francisco, but also influenced and changed the way the state and federal government as well as many other cities responded to the epidemic. It allowed for vaccines to be available in San Francisco a week before any neighboring counties and kept the number of H1N1 cases per capita lower than in other localities. She also commands the respect of her staff, other departments and colleagues in the private sector. 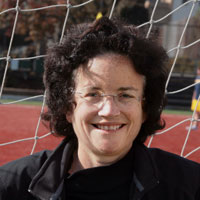 Why she was selected: In recognition of her passion and expertise that has furthered the mission of the Permits and Reservations Department by modernizing systems and reorganizing the staff to increase access to parks, significantly increase revenue, and focus on customer service, Dana Ketcham has been selected for a 2011 MFAC Public Managerial Excellence Award. Although it is unusual, Dana actually became involved in the Recreation and Park Department as a full-time volunteer when she spent two years redesigning the 103 athletic fields' reservation and permit system. She surveyed all field users and helped with public meetings to develop a season-by-season plan and online reservation and permit system. This new process added 35,000 hours of field playtime, more than doubling total field availability and capacity. Field users have enthusiastically received the outcome. She was then hired as the Reservation and Permits Manager and has completely automated all permits and reservation customer service functions by incorporating them into the recreation management database system – SFRecOnline. She led a staff reorganization to optimize customer service delivery, which has resulted in a 12% increase in permit fees – an increase of $600,000 from $3.5 million to now $4.5 million. 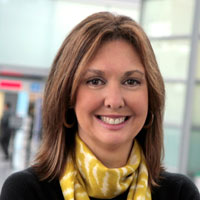 Why she was selected: In recognition of her leadership and vision in making San Francisco Airport a vibrant marketplace and increasing revenue, Cheryl Nashir has been selected for a 2011 MFAC Public Managerial Excellence Award. Since joining the Airport in 2006 she has developed and managed a dynamic mix of food and beverage, retail stores, duty free stores, advertising programs, rental car businesses and other services (with 9 of 15 leases being Bay Area businesses). That work has resulted in an overall 24% increase (totaling $19.3 million) in commercial revenue during Cheryl's tenure- $2.9 million of which goes directly to the General Fund. She also recently developed a successful concessions program for renovation of Terminal 2 that will generate $4.6 million to the airport and $700,000 to the General Fund. 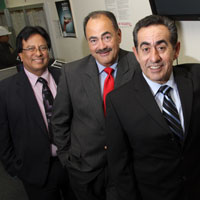 Why they were selected: In recognition of their leadership and impact through utilizing federal stimulus funds to put San Franciscans back to work, the JobsNow Program Management Team has been selected for a 2011 MFAC Public Managerial Excellence Award. The JobsNow Program was arguably the most innovative and effective subsidized employment program in the United States. During a time of high unemployment, the JobsNow team quickly built a local structure that put thousands to work in San Francisco. By acting fast and getting the word out to private and nonprofit employers, they were able to capture the largest amount per capita of any city in the country out of the Federal government's $5 billion in funding for subsidized employment. They were consistently ahead of target and had 1,000 people already enrolled in San Francisco at a time when no other city in the country had anyone enrolled. Upon termination of the program they had employed 4,127 people and captured almost $60 million in wages for San Franciscans. They managed and developed a program that efficiently put thousands to work, made strong connections with the business community and began to establish a new model for delivering workforce development services. 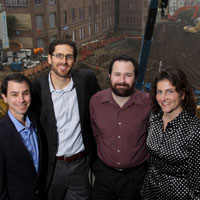 Why they were selected: In recognition of creating a model program that allows San Francisco to monitor and plan for its infrastructure investments the Capital Planning Program Team has been selected for a 2011 MFAC Public Managerial Excellence Award. Drawing on national best practices, they completed an analysis of the City's entire infrastructure, the backlog and its impact and created a 10-year capital plan mapping out future investment priorities. They update the plan and the proposed capital budget each year. This allows City leaders to make infrastructure decisions based on need and not on politics. The capital planning team has earned the respect of the political establishment and the other departments by drawing together a cohesive team and a thorough process.