Requires development projects in the Mission or South of Market to get a conditional use authorization if the project would demolish or convert space used by production, distribution, repair, arts activities or nonprofit groups and requires the development to replace the demolished space.

What the Measure Would Do

Proposition X would make two changes to development projects within the Mission and South of Market neighborhoods. First, it would require a conditional use authorization from the Planning Commission if the development project would demolish or convert space used for production, distribution or repair (known collectively as “PDR”), arts activities or nonprofit community uses. Second, it would require the new development to replace the PDR, arts or community space that is converted or demolished.1

The conditional use authorization would be triggered by the conversion of more than 5,000 square feet of PDR use, more than 2,500 square feet of nonprofit community use or any amount of arts use within the following Eastern Neighborhoods Plan Areas: the Mission, Eastern SoMa, Western SoMa and, when a plan for it is adopted, Central SoMa. 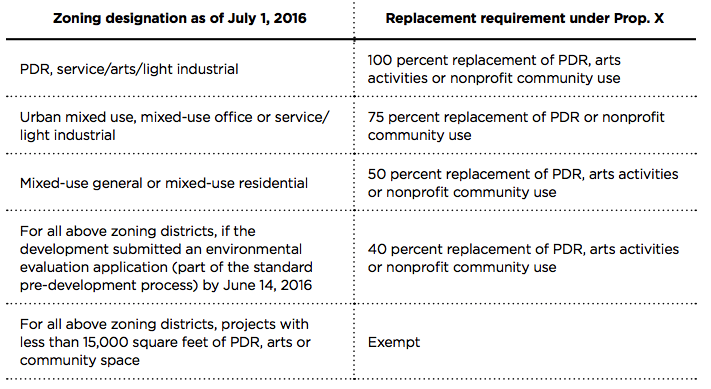 In Western SoMa, public property, affordable housing and existing nonconforming uses smaller than 25,000 square feet would all be exempt from Prop. X requirements. Additionally, projects that already received their entitlements or that have started the environmental review process would be exempt.

The measure states that in the future the Board of Supervisors could adopt an in-lieu fee and/or off-site replacement provisions to meet the replacement requirements. The fee would be used for the preservation and rehabilitation of existing PDR, arts and nonprofit community spaces.

Under Prop. X the Board of Supervisors could amend the measure legislatively by a two-thirds vote of its members.

Like most cities, San Francisco long had a zoning code whose most permissive designation was manufacturing. Any land classified as manufacturing could also include offices, housing and many other uses, some of which were not compatible with manufacturing activities. Over time, new residential projects in industrial areas resulted in conflicts between new residents and existing industrial users. Concerned that such conflicts would continue and the city might eventually lose most of its industrial lands, the city embarked on a major rezoning of the city’s Eastern Neighborhoods.

The discussions during the rezoning process led to the creation of a new name for the manufacturing areas: production, distribution and repair (PDR). The new PDR classification was meant to reflect more accurately the kinds of activities that use industrial space. PDR uses include making clothing, food and art; distribution, including the distribution of people (e.g., Muni bus yards are considered PDR); delivery services and transporters; and repair work such as car and furniture repair. This new term was woven throughout the designation of new zoning classifications, which created several explicit PDR zones that exclude office and residential uses and limit retail uses. Other zoning districts have been created that allow for a mixture of uses, including PDR.

The PDR sector is valuable to the city for a number of social and economic reasons. PDR businesses help San Francisco retain a diverse economy while providing needed supplies to key sectors such as tourism (e.g. laundries), restaurants (e.g. bakeries and distribution centers) and professional services (e.g. printing). These goods and services will become more costly if the PDR businesses move out of the city and transport their goods (or offer their services) from farther away. In addition, PDR businesses often create wellpaying jobs for those without a college degree.

PDR uses are very important to the city, and they are also at risk. Complaints from adjacent uses such as housing can lead to restrictions on PDR uses and to higher rent expectations that ultimately drive PDR uses away. PDR businesses tend to employ fewer people per square foot, and are less able to pay the same rent as and compete with higher intensity residential and office uses. For many of these reasons, it can be economically unfeasible to designate PDR space in new developments. As evidence of this, the majority of new and proposed Eastern Neighborhoods developments with mixed-use office or urban mixeduse zoning are either office/retail or residential/retail. Discussions have begun about ways to incentivize the development of PDR space, including redefining urban mixed-use zoning. It should be noted that more recent developments that are up for approval have opted to include some PDR space.

The city is taking additional measures to protect PDR space:

This measure was developed by advocates who support local artists and businesses and oppose market-rate housing in their neighborhoods. It could have gone through the legislative process but instead was placed on the ballot by a 7 to 4 vote of the Board of Supervisors. As an ordinance, it requires a simple majority (50 percent plus one vote) to pass.

More attention can and should be paid to retaining space for industry, the arts and nonprofit organizations in San Francisco. But this goal can be achieved legislatively and in consultation with groups that will be affected by these changes. While we appreciate that the proponents of this measure included a provision that would allow changes by a super-majority of the Board of Supervisors, we still believe that going through the normal legislative process is the best way to make such complex and substantial zoning changes, particularly ones that have not been evaluated for feasibility and may need to be adjusted in the future.

Vote NO on Prop X - Manufacturing and Arts Space
Footnotes

1 “Convert” is the word used for loss of PDR, arts or community uses throughout the measure’s legal text. It means a change of use or any other removal including demolition of a building that is not unsound.