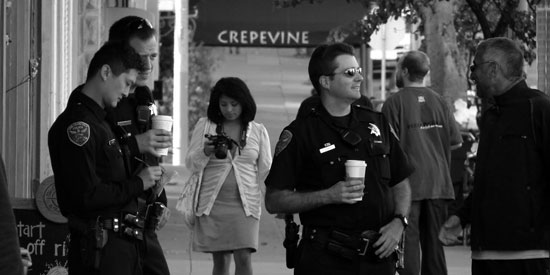 Prop. M would require the police chief and Police Commission to develop and implement an official community policing policy for San Francisco. Community policing is a strategy to increase interaction between police officers and community residents to proactively address neighborhood safety and livability.

San Francisco has employed certain community policing strategies for more than 20 years. For example, each police district has a community advisory board, officers are trained in cultural issues and the department has an existing foot patrol program. Prop. M would require even more comprehensive implementation, evaluation and reporting of community policing strategies and foot beat patrols throughout the city.

The measure makes two specific changes to existing police policy. First, it directs the Police Commission to adopt a comprehensive community policing policy that must contain preventative strategies, a plan for greater collaboration and community involvement, and the allocation of resources to neighborhood specific policing priorities. The policy must be adopted within six months of the measure's passage. Second, the measure directs the chief of police to create and implement a comprehensive foot beat patrol program in all police stations. It also requires dedicated foot beat patrols on Muni lines, to be determined based on community input and suspected criminal activity. Prop. M aims to institutionalize a citywide approach to community policing, but allows for this approach to be deployed within the police chief's discretion.

Prop. M would supplant any ordinance the voters approve in the Nov. 2, 2010, election that bans lying or sitting on public sidewalks, namely Prop. L. If both measures pass and Prop.M receives more votes, Prop. M would supersede Prop. L.

In 2007, the Board of Supervisors approved a year-long citywide foot patrol pilot program. An evaluation of that program found that foot patrols were popular both among the public and within the Police Department, and the majority of people surveyed said they felt safer as a result of foot patrols. The evaluation made several recommendations to institutionalize community policing and foot patrols, but according to proponents of Prop. M, the Police Department has not put those recommendations into practice.

This measure was put on the ballot by a majority of the Board of Supervisors. It was not enacted through the normal legislative process because the sponsoring supervisors believed they did not have the super-majority of supervisors' votes that would have been necessary to override an expected mayoral veto.

We believe that community policing and foot patrols are promising tactics for addressing crime in distressed communities. However, we do not agree that Prop. M, or any police strategy, needs to be on the ballot. It is bad precedent to make policy decisions at the ballot box that undermine the ability of department heads to manage their own departments. Public safety problems and the approaches to solving them will change over time, and we should not be locked into one particular approach that appeals to voters at one point in time. Further, this measure's inclusion of a side issue with the "poison pill" about the Prop. L sit-lie ordinance is bad policy. Voters should not have to choose between them.

SPUR recommends a "No" vote on Proposition M.