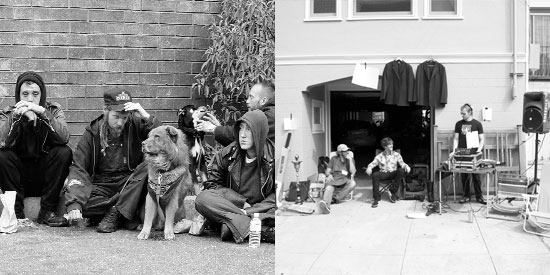 Proponents of Proposition L are concerned about people engaging in negative behavior on the street. Opponents are concerned that Proposition L will criminalize innocent behavior. Photos by flickr user Franco Folini (left) and Colleen McHugh (right).

Those who violate this ordinance would first receive a warning, after which the violator would be fined between $50 and $100. Subsequent violations (dependent on when they occurred in relationship to the first violation) would be considered misdemeanors and carry greater fines or jail time, or both.

Several existing ordinances regulate behavior on public sidewalks and other public places in the City. These include prohibitions on aggressive panhandling,1 obstruction of sidewalks2 and loitering in certain areas or during certain hours.3 State law makes it a misdemeanor to "willfully and maliciously obstruct the free movement of any person on any street, sidewalk or public place."4

If passed, Prop. L would prohibit someone from sitting and lying on public sidewalks, even if that person were not persisting in aggressively panhandling, willfully and maliciously obstructing the sidewalk, or loitering.

Proponents and opponents of Prop. L disagree as to whether a citizen complaint is required to enforce existing sidewalk obstruction laws. Proponents of this measure argue that current laws are ineffective in deterring negative behavior on the street, in part because they require the victim to identify himself and victims are often unwilling to do so. They argue that under current law, the only way for law enforcement to know that someone feels victimized is for that victim to notify the police. They cite General Order 6.11, which states, "When arrests are made "¦ officers shall make reasonable efforts to identify, but at least, must describe person(s) who were obstructed by the party to be arrested or cited."

This initiative was introduced legislatively by the mayor in response to resident and merchant concerns about the behaviors of some individuals who occupy the sidewalk on Haight Street and engage in behaviors that some users of the public sidewalk find intimidating and objectionable. The Board of Supervisors did not pass the legislation. The mayor then submitted this measure to voters.

Public sidewalks that feel comfortable and safe for everyone help contribute to the healthy life of a city. Proponents argue that this measure creates a badly needed tool to help law enforcement keep the sidewalks clear of individuals who intimidate others even when they are not violating the current laws, and that current laws are ineffective because they require the police to identify a victim in order to enforce the laws. Opponents assert that most of the behaviors targeted by this measure are already illegal under existing law, that a citizen complaint is not required for law enforcement to act. They also suggest that this law is so broad that it will lead to selective enforcement, which raises questions of constitutionality and is certainly bad public policy.

SPUR was unable to reach the 60 percent threshold needed to take a position for or against this measure.

SPUR has "No position" on Proposition L.