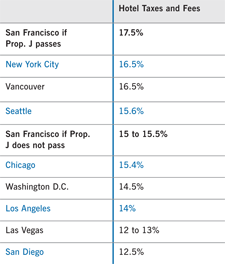 If Prop. J passes, San Francisco's effective hotel tax rate will be the highest among peer cities in the United States. While until recently the City's hotel tax was average among its peers, in the beginning of 2009 San Francisco added a Tourism Improvement Fee of 1.5 percent for downtown hotels and 1 percent for all other hotels. This placed San Francisco's hotel tax near the top tier of U.S. cities. Prop. J proposes to further raise the hotel tax by two points. We think this is an unwise move that could cause serious economic harm to an already suffering tourism sector, San Francisco's largest industry. Note: Amounts are percent of hotel room based on a hotel room of $200 per night. Some fees are per room dollar fees, not percents of the total room charge. Source: Information compiled by the San Francisco Convention and Visitors' Bureau. September, 2010.

Several portions of this measure are identical to another measure on this ballot, Prop. K, a measure introduced by the mayor. But the measures differ in important ways. First, while the mayor's measure includes the provisions to apply the tax on the full retail rate and to limit exemptions to low-income residential hotels, it does not include the temporary 2-point increase in the hotel tax. Second, the mayor's measure includes a provision that would invalidate Prop. J if Prop. K receives more votes. That means that if both measures pass but the mayor's measure receives more votes, the 2-point increase would not occur but the code clarification provisions would remain.

Prop. J is an initiative ordinance that made it to the ballot as part of a signature-gathering effort funded by a coalition of labor unions. It is part of a series of revenue measures that were proposed for the ballot in part to reduce current and projected budget deficits.

In addition, the measure is part of a City effort to close loopholes in the hotel tax. The City previously has attempted to collect the hotel tax on the retail rate charged by online travel companies for stays in San Francisco hotels that are booked online. Online travel companies believe they are not required to remit this tax to the City and sometimes keep the tax that would be charged on the difference between the retail rate and the wholesale rate. While this disagreement is being decided in court, passing a ballot measure clarifying the tax agreement would eliminate ambiguity in the future. This amendment clarifies that the full retail amount of the booking is subject to the tax, regardless of who the sales agent is.

Because it is an expansion of the use of an existing tax, it must be passed by a simple majority of the voters. Because the ordinance affects the application of a tax, it cannot be changed by the Board of Supervisors and must be referred to the people.

SPUR is opposed to this measure for three main reasons. First, the case has not been made that the General Fund needs to grow. This really may be a time when we need to solve our structural budget deficit by cutting back. Second, we think this is a case in which the tax would start to make San Francisco uncompetitive. It seems hard to justify having a higher rate than New York's. Third, there is a history in San Francisco of using most of the proceeds of the hotel tax for purposes that generate economic activity. This measure's commitment of the proceeds to the General Fund sets a precedent of utilizing the tax for public objectives that may be important but do not clearly generate additional economic activity.

SPUR recommends a "No" vote on Prop. J.