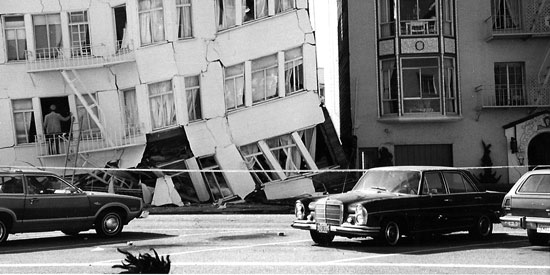 We know how to make sure our soft-story buildings don't collapse in the next earthquake. Photo flickr user Eve Fraser-Corp.

Soft-story buildings are those with many openings (such as garage doors or large windows) and a lack of interior partition walls on the ground floor. They are considered to be one of the most vulnerable classes of buildings in the city, now that unreinforced masonry buildings have undergone retrofits. Proposition A is a general obligation bond that would provide deferred loan financing to pay for the required retrofit of permanently affordable housing and single room occupancy buildings with seismically vulnerable soft-story conditions.

The Community Action Plan for Seismic Safety was created after the 1989 Loma Prieta earthquake to determine what work was needed to make San Francisco safe and resilient. The study determined that there are approximately 4,400 wood-frame buildings built in San Francisco beforeMay 21, 1973, that have three or more stories and five or more residential units, all of which may have a soft-story condition. The CAPSS study estimates that about 2,800 of these buildings are very likely to have soft stories.1

The CAPSS study determined that if the 2,800 vulnerable soft-story buildings are not retrofitted, 43 percent to 85 percent of them will be "red tagged" after the next major earthquake expected to occur in the buildings' lifetime. This means that residents would not be able to use them until they were replaced or repaired, which could take years. The study further estimates that a quarter of those red-tagged buildings (from 300 to 850 buildings) could collapse and cause serious injury or death to 3,000 to 9,000 residents. This vulnerability has not been mitigated by efforts to encourage building owners and managers to retrofit voluntarily.

TheMayor's Office of Housing and the Department of Building Inspection have estimated that there are as many as 125 permanently affordable housing developments and 31 single room occupancy hotels with softstory conditions. These buildings house tenants who are unlikely to be able to afford the cost of retrofitting their homes. Prop. A will fund hard and soft retrofit costs, as well as life-safety and Americans with Disabilities Act upgrades to ground-floor spaces, for up to 125 permanently affordable housing developments with soft-story conditions. Hard costs, life-safety upgrades and ADA upgrades for ground-floor spaces will be funded for up to 31 SRO hotels with softstory conditions. In total this bond will pay for retrofitting approximately 8,250 units of housing that are at a high risk of collapse in the next major earthquake.

In 2009, SPUR completed Phase I of its Resilient City Initiative, which described what we need to be doing now, before the next major earthquake, so that we can respond quickly and effectively after the earthquake.3 The first priority identified by SPUR in its report "The Dilemma of Existing Buildings: Private Property, Public Risk" was for the City to implement a mandated retrofit program for soft-story wood frame buildings.

In early 2010, the mayor convened a task force to recommend an implementation strategy to mitigate soft-story buildings. This task force has been meeting regularly to develop a mandatory soft-story retrofit program for buildings with three or more stories and five or more units. A mandatory program will be introduced this fall. When it is implemented, low-income residents of affordable housing in buildings that have soft stories will be unable to shoulder the cost of retrofitting their homes. A public subsidy of $46.15 million is needed to retrofit these affordable housing units.

This measure was placed on the ballot with the support of the mayor and all 11 members of the Board of Supervisors.

San Francisco is at great risk of a major earthquake in the near future. Response and recovery planning, as well as seismic mitigation, are needed on many fronts. Soft-story buildings represent our most vulnerable class of buildings, and we need to retrofit them so their residents will be safe and can shelter in place after an earthquake.We must retrofit these buildings now, before the disaster, so that we can recover quickly and effectively afterward. Prop. A provides a modest amount of public financing to ensure that some of the city's most vulnerable populations can continue to live safely in their homes for years to come.

SPUR recommends a "Yes" vote on Proposition A.