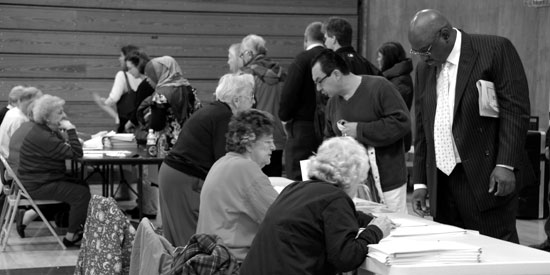 Currently, voters must register at least 15 days prior to an election. Proposition E is an amendment to the San Francisco City Charter that would allow eligible San Francisco residents to register to vote on Election Day, or at any time leading up to a municipal election. This would apply exclusively to municipal-only elections (held in odd-numbered years, such as 2011). It would keep unchanged the 15-day registration deadline for statewide and federal elections (held in even-numbered years, such as 2010).

Upon filling out a standard California voter registration form and a late registration form, newly registered voters would be allowed to cast a provisional ballot. The San Francisco Department of Elections would process and verify the voter's registration information. If that information is accurate, the department would count the provisional ballot. Lateregistering voters automatically would be registered to vote in future statewide elections. These procedures to define election-day voter registration have not been finalized yet, but they are expected to be defined by an ordinance from the Board of Supervisors in consultation with the Department of Elections by the November 2010 election.

Prop. E also amends the city charter's definition of "voter" to mean a person who is registered to vote "in accordance with the provisions of municipal law" and not just state law. This allows registration procedures for municipal elections to be established or changed in the future by ordinance alone, without requiring another charter amendment.

The Board of Supervisors placed Prop. E on the ballot with a 9-2 vote. The Department of Elections supports it.

Exclusively municipal elections suffer from low voter turnout, averaging 37 percent turnout in the past 10 elections in San Francisco. Nine states and the District of Columbia allow sameday voter registration.When the issue failed on the statewide ballot in 2002 (Prop. 52), the measure passed in San Francisco, winning 59 percent of the vote. If voters approve Prop. E, San Francisco would be the first city in California to allow same-day voter registration.

While voter turnout in San Francisco is significantly lower for municipal elections than for statewide elections, and the need to continue to increase participation is ongoing, the potential cost of providing additional time to register to vote may outweigh the small increase in turnout this measure is likely to produce.

We applaud efforts to increase participation in elections, and as a civic organization SPUR works regularly to widen the conversation and increase engagement.We think it is equally important to seek increased enthusiasm among voters about the opportunity to participate in elections and raise awareness of the implications of the measures on the ballot. That is, in fact, our objective in producing this voter guide. Simply allowing people to vote on Election Day does not guarantee that they have a reason to be more engaged in the voting process. In sum, we see the benefits of this measure but have some concerns about whether it indeed is the best way to achieve the goals of increased citizen participation.

The SPUR Board was unable to reach the 60 percent threshold required to take a position for or against a measure.