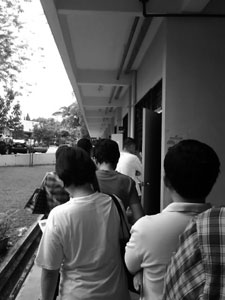 The measure would enfranchise a large number of parents and guardians who are not currently allowed to vote for school board candidates. The measure's lack of specificity, however, raises some questions about how it will be implemented. Photo by flickr user lovebuzz.

This amendment to the San Francisco City Charter does not distinguish between legal and illegal non-citizen residents. As the measure is drafted, non-citizens would be allowed to vote regardless of immigration status. This is due in part to the fact that it would be difficult to require the San Francisco Department of Elections to monitor the immigration status of potential voters.

The measure is silent on how it would be implemented, except to say that the Board of Supervisors may adopt implementing ordinances. It is likely that if voters approve Prop. D, the Department of Elections would coordinate with San Francisco Unified School District officials to develop a complete list of people with children in the public schools, and then cross check that list against the list of people who are already registered or eligible to vote in general elections. The Department of Elections could then create a separate ballot for the School Board that could be mailed to the non-citizen parents, guardians or caregivers. But since the measure is silent on how it would be implemented, it is possible that the non-citizen voters would not be limited to voting by mail, and could be allowed to vote at regular polling places.

According to the Department of Elections, the cost to the City to implement the measure could be as little as $100,000. There would be an additional unknown cost to the school district. After the pilot period, the Board of Supervisors would need to vote to continue including noncitizens as voters in these elections.

For many years, until the 1920s, some states allowed non-citizens to vote in elections "” and even to hold office, in some cases. Allowing noncitzens to vote was based on a desire to encourage immigrants to invest in local civic institutions as quickly as possible.

Over the past three decades, local governments in Massachusetts, Maryland, Illinois and New York have granted non-citizens the right to vote in some elections "” most often those elections involving local school boards or other educational bodies.

San Francisco has attempted to extend voting rights to non-citizens in the past. In 2004, a version of this measure that did not include a sunset clause failed at the polls. SPUR did not reach a position on that measure.

Although the San Francisco Unified School District doesn't keep track of its students' citizenship status or country of origin, the school district reports that 28 percent of its 56,000 students (nearly 16,000 students) are learning English as a second language. Based on an assumption that on average, most ESL students have more than one non-citizen parent or guardian, this measure could result in an increase of 20,000 or more eligible voters in School Board elections.

This charter amendment was placed onto the ballot by a 9-2 vote of the Board of Supervisors.

SPUR has worked for decades to increase participation in the civic decision-making process. We strongly believe that a responsive, effective government requires a high level of involvement by the city's residents.

This measure aims to increase participation in both the electoral process and in local education. Those are both worthwhile goals.While we understand that voting for the School Board is not the most important form of participation in schools, it is nonetheless an activity that should be open to anyone with a child in the local schools. In the early years of the United States, citizenship was not a barrier to voting in local elections. Several other communities throughout the country have already removed the citizenship barrier for voting in school board elections, and we believe the time is right for San Francisco to join those select cities.

We are concerned about a number of issues in the way this measure was written, however. First, the language of Prop. D is unclear about how many people in a household are allowed to cast a ballot. It also does not place any limitations on the number of guardians a child could claim.

Second, there remains a clause in the naturalization process that allows Federal officials to deport would-be citizens if they had previously voted illegally. This may deter some parents or guardians who are seeking to be citizens.

Third, the measure does not specify how it will be implemented, leaving open many questions about cost and the role of the school district. If the school district turns over names and addresses of parents to the Department of Elections, they undermine the privacy of the parents, some of whom are undocumented immigrants. If they do not turn over names and instead manage the election on their own, they take on a new and inappropriate responsibility for a school district. If they simply turn over to the Department of Elections a list of generic addresses of all parents and guardians, they may inadvertently disenfranchise some noncitizen parents who happen to live in the same households as a registered voter since the Department of Elections might crosscheck the household with their registered voting list.

In sum, the measure would certainly enfranchise a large number of parents and guardians in the school district who are not currently allowed to vote for school board candidates. But the measure's lack of specificity raises some questions about how it will be implemented.

The SPUR Board was unable to reach its 60 percent threshold to take a position for or against this measure.