Voter Guide November 1, 2010
This measure appeared on the November 2010 ballot.

Proposition B would make a number of changes to the pension retirement system:

The proposed charter amendment would limit the City's contribution to the San Francisco Health Service system:

When the City enters arbitration over terms and conditions of City employment, the proposed Charter amendment will require the arbitrator to make findings about the costs to the City of pension, health and retiree health benefits, and take those costs into account in deciding compensation. 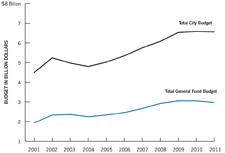 Over a ten-year period, the General Fund budget grew from just under $2 billion to just under $3 billion. This increase in the cost of government provides one of the major backdrops for the debate over pension reform. Source: Mayor's Budget Office, annual City appropriations ordinances.

Retirement costs are becoming a major concern in local government finance. In the past five years, total City contributions to pension and health care benefits for active and retired workers have increased from $419 million to $776 million and are projected to increase to $1.1 billion in several years.

There is a difference in long-term fiscal liabilities between pension and health care costs for retirees. Defined-benefit pensions are mostly funded through a mix of employee and employer contributions throughout the career of the employee, all before that employee ever draws on those benefits. Additional City contributions are required only when there has been a drop in the earnings from investments that have been made with the regular contributions and there is not enough investment income to cover the annual pension obligations.Whether the pension obligations will be under-funded in the future depends on both actuarial assumptions (how long people live) and what happens to the various sectors of the economy in which the pension fund makes investments. Certainly, the future state of the economy is almost impossible to predict. There is inherent uncertainty about whether the levels of funding now going into the pension program through investment income and new contributions will be enough to offset the money going out in the form of pension benefits.

By contrast, retiree health care costs are mostly not pre-funded, and instead are paid out annually. This means that the City pays for the health care for retired workers and their dependents (as well as current employees) based on the actual cost of the benefits provided that year. In recent years there have been several ballot measures to address retiree health care costs.While these measures have reduced some of the long-term obligations, they have not reduced the short-term obligations, nor have they come close to fully solving the long-term problem.

The background conditions for this measure include the increasing divergence of the fortunes of public sector and private sector workers, at least in San Francisco: Those in the public sector continue to have good retirements paid for with defined-benefit pensions, while also now making more money on average than their counterparts in the private sector. According to the Controller, the average salary of a City employee is approximately $92,000, not including benefits. In addition, the cost of fully funding both definedbenefit pensions and retirement health care is consuming an increasing share of the City budget.

This measure was placed on the ballot by obtaining signatures from registered voters in a campaign led by Public Defender Jeff Adachi.

This measure caused more debate at the SPUR Board of Directors than any other on the November 2010 ballot.

During the past decade, while the economy boomed, the City stopped putting money into the pension plan on the argument that it was fully funded based on the value of assets in the pension fund. All of the extra money from not contributing to the pension fund was instead put into pay raises and new hires in City government. Meanwhile, there has been an irresistible temptation on the part of a succession of mayors to offer to have the City pay for employee pension contributions and employee health-care costs in exchange for smaller pay raises, balancing the budget in the short-term while creating a long-term increase in benefit costs.We are now faced with unraveling these past problems. San Francisco is not in danger of going bankrupt the way some jurisdictions will, but the cost of paying for these promised benefits is going to increasingly push out actual provision of public services if we don't do something about the problem.

The key legal question contained in this measure is going to be something that governments across America wrestle with, probably until the question reaches the Supreme Court. Two principles are pitted against each other: the sanctity of contracts against the right of today's voters to not be bound by actions of past voters. By reducing benefits that were promised to City workers, opponents will argue that a contract was illegally broken. Supporters will argue that the very idea of democracy hinges on the idea that one generation of voters cannot bind future generations of voters from changing prior decisions.We conclude that it is not possible to anticipate at this time what the courts will decide.

Taking account of the downsides and the legal uncertainties surrounding the measure, we believe the pros of Prop. B outweigh the cons. City workers will continue to have a much better deal than most of their private sector counterparts even if this measure passes. Compared to the possibility of changing from a defined benefit plan to a defined contribution plan, which would clearly be closer to the benefits offered by private businesses and nonprofit organizations, the proposed changes in this measure offer a modest shift in costs.

This measure can be viewed as a de-facto pay cut to City employees.We acknowledge that it will be painful. But we think this is exactly the kind of painful readjustment that people across our entire society are making.

Given the serious structural problems that our economy is experiencing, we think this measure proposes reasonable and modest changes that are necessary for the taxpayers of San Francisco to continue to be able to afford public services.

SPUR recommends a "Yes" vote on Prop. B.