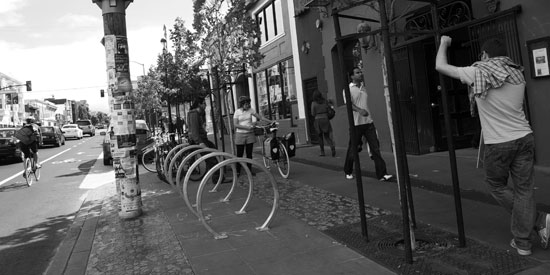 Revenue from the vehicle registration fee would go to funding projects like the new Valencia Streetscape Project. Photo by Colleen McHugh.

This measure would add $10 to current vehicle registration fees to fund congestion and pollution mitigation projects and programs.

If approved by voters, the fee will generate an estimated $5 million per year. These funds will be administered by the San Francisco County Transportation Authority in its role as the county's congestion management agency. Under the law that authorizes it to place the fee on the ballot, the SFCTA was required to develop a plan for how it would spend the revenue from the new fee. The plan indicates that the fee will fund programs that aim at a number of goals:

The fee has no sunset and can be increased only through action by the California Legislature and subsequent vote of the people of San Francisco.

In 2009, the California Legislature passed Senate Bill 83, which made way for California's congestion management agencies to place a $10 vehicle registration fee on the ballot to help fund their pollution and congestion mitigation efforts. The legislation requires each agency to prepare an expenditure plan before going to the voters, and also requires that the fee support the agency's mitigation goals and that the programs benefit those who pay the fee.

The SFCTA conducted a planning process with a citizen advisory committee to develop guiding principles that informed the Prop. AA expenditure strategy:

The San Francisco Board of Supervisors, acting in its role as the board of the SFCTA, approved the expenditure plan 8-3 and sent this measure to the people. (More information on SB83 and the SFCTA's expenditure plan) This measure requires a simple majority to pass.

SPUR continues to advocate for the allocation of substantial funding for public transit, pedestrian and bicycle infrastructure, and transit-oriented development throughout the region.

This measure is a worthy effort to bring a modest, consistent and needed revenue stream to set of projects and programs that will result in short-term improvements to San Francisco's transportation infrastructure.

We appreciate that the enabling legislation called for an expenditure plan before going to the voters and that the SFCTA went through a diligent planning process that provided sound guiding principals that call for tangible benefits in the short-term.We hope the SFCTA and the implementing agencies will be able to deliver this ambitious element of the plan.

Our largest concern is that in spite of the relatively small amount of money this measure generates, voters may have a false sense they have solved the problem of transportation funding. Despite this concern, there is a strong need for a consistent funding stream for road improvements, and pedestrian safety and transit upgrades.