Proposition A is a special tax that appears on property owners' property taxes and requires a two-thirds vote to pass. If approved, the measure would continue for an additional 20 years an annual assessment of $32.20 for single-family residential homes and non-residential parcels, and $16.10 for each dwelling unit in mixed-use and multifamily residential parcels. The cap will be adjusted annually by the "San Francisco All Items Consumer Prices Index for All Urban Consumers," not exceeding 2 percent. Proposition A includes an exemption for owners and occupants who are at least 65 years of age. 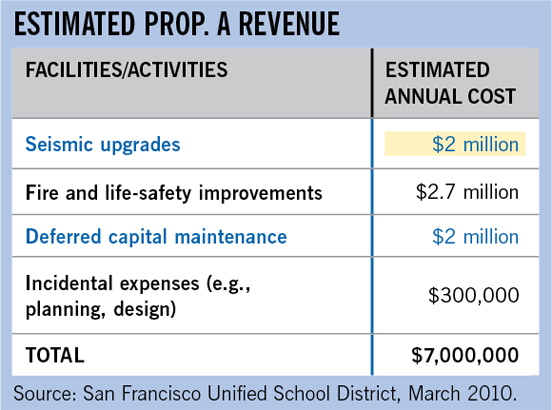 It is estimated that Prop. A will generate approximately $7 million, starting in 2011. The estimated expenditures from the annual revenues from the special tax would be divided among four areas (see table).

The original measure creating this special tax represents an atypical use of Mello-Roos financing authorized under state law. Mello-Roos bonds, or community facilities districts, are often used for new development. Under this arrangement, developers and subsequent owners pay a special tax to support new public facilities and services. For example, San Francisco has used this method of finance in Mission Bay. However, Mello-Roos measures also can be applied to already developed areas&mdash;as in this case, in which the school district chose to create a citywide community facilities district based on a simple assessment method.

In 1990, San Francisco voters approved a school facilities special tax. The term of the 1990 tax expires in 2010. In order to avoid a lapse in the collection of this revenue, a renewal measure must be on the June ballot so that the tax renewal would appear on the property tax bills for 2011. Proposition A would extend the tax, with some modifications, for an additional 20 years to address needs not met with the 1990 tax.

Since 1990, the existing special tax has been used to fund a variety of capital projects, including fire alarm systems, fire sprinklers, the removal of underground fuel tanks and safety-related elements of new construction at Bessie Carmichael, Dianne Feinstein and John O'Connell schools. It also has funded the staff who work on the maintenance, repair and replacement of safety systems, at a cost of approximately $2 million annually. However, more work is needed. In addition to addressing unexpected seismic and safety needs, the special tax will fund a variety of planned seismic projects at 10 school sites across the city.

While the SFUSD has other funding sources for seismic and safety needs, those sources are restricted or dwindling. In 2003 and 2006, San Francisco voters approved general obligation bonds for school facility capital improvements, a total of $745 million. However, those funds are limited to 94 of San Francisco's 150 school sites. In the past, the SFUSD has received $2.5 million in deferred maintenance funding from the state. However, this funding likely will evaporate in light of California's growing deficit problems.

It should be noted that SFUSD is considering other local revenue ideas, including a City parcel tax on the November ballot and an additional general obligation bond (of approximately $550 million) in 2011 to fund modernization at schools not included in the two previous bond authorizations.

We have no doubt that schools remain underfunded in San Francisco and statewide. Their financial needs span the entire spectrum of school costs: teacher salaries, class sizes, elective programming and capital needs. With these needs, it is essential to provide schools with any additional funding possible, given California's restrictions on revenue enhancements.

Yet we also are concerned that the amount that Prop. A would gather is too low, and believe this measure could have secured even more resources for the schools. Aside from appealing to taxpayers by not creating an additional tax burden, there is no particular reason for this measure to remain at the same level as when it initially appeared before the voters 20 years ago. Further, because the measure does not identify school sites at which the SFUSD will make improvements, the district will find it more difficult to demonstrate to the voters what it will actually accomplish with the funds.

Despite these concerns, we support the overwhelming need for new revenue for the school district. Special taxes are a very efficient way to raise annual revenue, as all the funds are spent locally and none of the funds are lost in debt service. Still, we strongly encourage the school district to communicate a strategic vision for school financing and facilities upgrade needs, as well as to develop measures that can demonstrate the funds are being spent properly.

SPUR recommends a "Yes" vote on Prop. A.