Proposition D is an amendment to the San Francisco City Charter that proposes three changes to the City's pension system. The goal of the measure is to address a portion of the long-term unfunded liabilities in the pension and health systems for retired City workers"”that is, the benefits the City is legally or contractually obligated to supply but for which there is not sufficient funding to pay.

Specifically, Prop. D proposes two changes that would affect only those employees hired after July 1, 2010:

1. Use a two-year average in highest wages earned to determine the future pension for these new employees (instead of the 12 month average now).

The third component of Prop. D establishes a mechanism to fund a portion of the unfunded liability for retiree health care:

3. Require the City to contribute to the Retiree Health Care Trust Fund when the City's costs of paying into employee pensions are lower than normal.

1. Uses a two-year average in wages to determine pension

Pensions are based on a combination of an employee's years of service, highest wages earned and age at retirement. Under current law, the pension is based on the average of the retiree's highest 12 consecutive months of earnings. Under Prop. D, compensation for all employees hired after July 1, 2010 would be defined as either the average of the retiree's highest earnings over two consecutive fiscal years or the retiree's compensation for the last 24 months of employment, whichever is higher. This provision would result in a slight decrease in the average size of a pension.

3. Requires contributions to the Retiree Health Care Trust Fund when pension costs are below average

The third provision of the measure is triggered only when the City's contributions to the pension system are lower than average (that is, when investment returns are performing exceptionally well). During such a "boom year," when the City can rely on these returns to supply its portion of contributions to the pension system, this provision requires the City to contribute to a Retiree Health Care Trust Fund an amount equivalent to what the City ordinarily would have put into the pension system in an average year. This requirement is a "set-aside" of City funds during times when the City's actual contribution to pensions is lower than normal. Under current rules, in the event that the pension system does not require any additional City funding, the City has no restrictions on what to do with that "saved" revenue. This third provision of Prop. D is meant to require the City to partially pay for its projected retiree health care costs when it has excess finances. 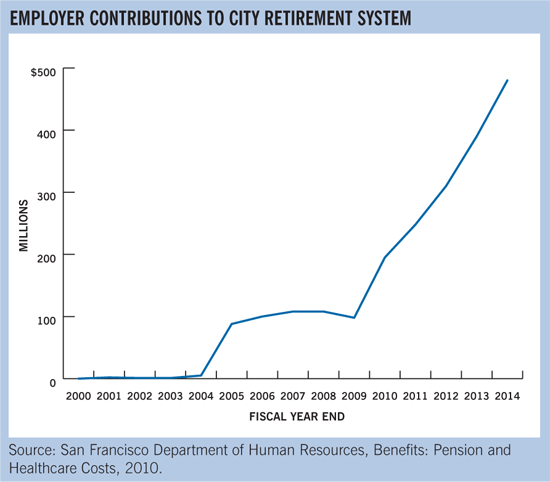 The San Francisco Employees' Retirement System Pension Plan has only 97 percent of the money needed to pay projected future pension costs. The difference between the available funding and the projected costs is approximately $494 million in fiscal year 2010-2011.

The City has two types of retirement benefit costs: pensions and health care. In general, the pension system is better funded due to employee contributions, although it has an unfunded liability of $494 million in fiscal year 2010-11. The retiree health care system is almost entirely unfunded, and its costs are paid out of the General Fund every year. The unfunded liability for retiree health care is approximately $4 billion.

Pensions for City workers are financed by a mix of City contributions and employee contributions (from their paychecks) into the San Francisco Employees' Retirement System Pension Plan. The amount an employee pays into the SFERS Pension Plan is determined by each employee's union. The monies in this fund are invested, and investment earnings are supposed to pay the cost of retirement for City workers.

For more than a decade, high investment earnings allowed the City to fund 100 percent of its future projected retiree pension costs while paying less than the normal cost of these benefits. However, the recent decline in investment earnings has pushed the funding ratio down from 100 percent to 97 percent. In other words, the SFERS Pension Plan has only 97 percent of the money needed to pay projected future pension costs. The difference between the available funding and the projected costs, which is known as the unfunded liability, is approximately $494 million in FY 2010-11. As time goes on, this problem will only grow larger. On the pension side, assuming a 7.5 percent average annual rate of return, by 2013 the funded portion of the City's retirement liability is projected to fall from 97 percent to 77 percent.

Unlike pensions, health benefits for most City workers are not pre-funded. These costs are paid directly out of the City's General Fund. Under current policy, the City pays 100 percent of all vested employees' retiree health care costs. A 2008 charter amendment changed the vesting rules, required new employees to pre-fund their retirement health benefits and set up a Retiree Health Care Trust Fund to begin gathering some of the $4 billion in outstanding retiree health costs. These costs are increasing. In 2001, the City expended $17 million on retiree health care. In 2007, that number had grown to $130 million. In 2010 and subsequent years, the figure is projected to rise further.

Like the SFERS Pension Plan, the Retiree Health Care Trust Fund has a large unfunded liability, which is estimated at $4 billion. For fiscal year 2008-09, the City had a $165 million gap between the City's retiree health benefits funding and the contribution level recommended to fully fund the liability. This problem is only getting worse. By July 1, 2010, the City's contribution for retiree health care is expected to jump from 9.1 percent of payroll to 12.1 percent of payroll. 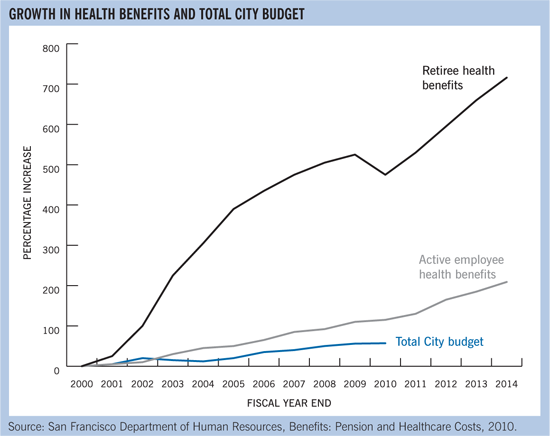 Health benefits for most City workers are not pre-funded. The City pays 100 percent of all vested employees' retiree health care costs, which comes directly out of the City's General Fund. In the last ten years this unfunded liability has grown 462 percent, and costs are expected to continue rising.

While this measure does not fully solve the problem of funding retiree pension and health care costs, it begins to address the issue without increasing short-term costs. Furthermore, although SPUR expects that future measures will be presented to the voters to address the ongoing funding problems, SPUR unequivocally supports Prop. D because of the commitment demonstrated to rating agencies, the projected savings of $430 million and the positive financial impact of beginning to address the problem today rather than waiting until tomorrow.