Proposition B is a general obligation bond that will allow the City to incur $412.3 million in bond debt to finance improvements to the Auxiliary Water Supply System, critical firefighting facilities and Fire Department infrastructure. Proposition B will also finance a new facility in Mission Bay that will incorporate the police command center, as well as a neighborhood police station and a fire station. This measure requires a two-thirds majority of votes to pass. Funding will be divided among the projects specified in the measure:

Existing neighborhood fire stations will receive seismic upgrades, as well as emergency power, Americans with Disabilities Act renovations, waterproofing and utility upgrades, as well as changes to existing stations to improve their recently incorporated ambulance response capabilities. In addition, this measure will pay for the new public safety building in Mission Bay. 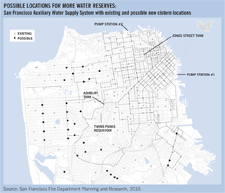 Currently most of the Richmond District and the Outer Mission are not served by the City's Auxiliary Water Supply System and instead rely on the City's existing network of 177 cisterns"”reinforced underground reservoirs of 75,000 to 250,000 gallons. Among other things, this bond funds the construction of approximately 32 new cisterns to serve neighborhoods not protected by the AWSS.

This portion of the bond will include rehabilitation and seismic improvements to the City's Auxiliary Water Supply System:

Created with public funding after the 1906 earthquake and fire, the Auxiliary Water Supply System is the only high-pressure water network of its type in the United States, and is used exclusively for firefighting. The AWSS supplements the municipal hydrants and is used throughout the year for the suppression of multiple-alarm fires. With the potential loss of municipal domestic water supply after an earthquake, the dedicated AWSS could be the primary firefighting water supply. 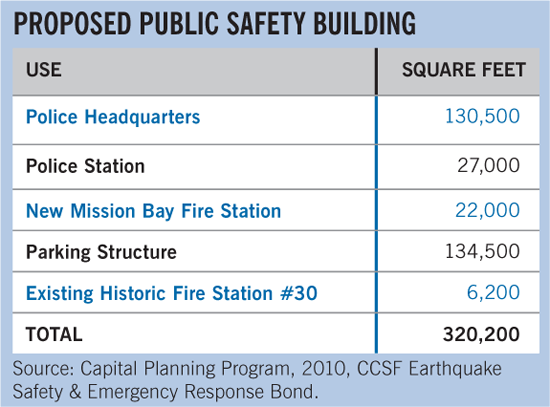 The City will spend approximately $14 million in the preparation of the Prop. B Earthquake Safety and Emergency Response Bond to ensure that the capital projects it would fund are ready for financing and construction. Other measures to improve accountability and generate greater public confidence include the use of funding principles, independent audits by the San Francisco Citizen's General Obligation Bond Oversight Committee, and improved public access to information through a website. The City will hold an annual public hearing and be subject to regular review by the Capital Planning Committee, Police Commission, Fire Commission and the Board of Supervisors.

This bond measure was developed by the Capital Planning Committee, which regularly updates the City's 10-Year Capital Plan and annual capital budget. The committee includes the city administrator, president of the Board of Supervisors, mayor's finance director and others.

The Prop. B ESER general obligation bond is the third of five bond measures proposed by the City's Capital Plan. Future measures planned include a second ESER bond of $450 million anticipated for November 2013, and a park system renovation and improvement bond of $150 million expected in November 2014. The proposed ESER and parks bonds are timed so that they replace previous bonds about to retire. As a result, they will not increase San Francisco property tax rates above 2006 levels.

The ESER Bond program will address some of the most pressing concerns regarding earthquake safety and emergency preparedness. However, some aspects of vital public safety infrastructure are not being met directly by this bond program. For instance, planned new jails will be funded from existing General Fund bond debt, at least partially due to common belief that it would be very difficult to win voter approval for them. Additionally, accommodation for forensic science and other technical investigation facilities was included in, and then removed from, the ESER bond. The proposed Capital Plan covering fiscal years 2011 through 2020 proposes to fund a new, shared laboratory facility for the Police Department Crime Lab and the Office of the Chief Medical Examiner in the second ESER bond, proposed for November 2013.

Earthquake safety and preparedness is a serious concern for San Francisco. This bond addresses some of those outstanding seismic concerns. In particular, the Auxiliary Water Supply System is in need of retrofit and is a key part of this bond. We have some concerns about key aspects of the size and lack of specificity of this bond, in particular the location of the public safety building, its amount of parking and the overall design of the bond that does not seem to acknowledge changes to operational levels over time.

Despite these concerns, we think this is an important bond that will address some of the City's most pressing concerns regarding earthquake safety and emergency preparedness.

SPUR recommends a "Yes" vote on Prop. B.