The Bigger Picture: Nine Ideas for a Connected San Francisco 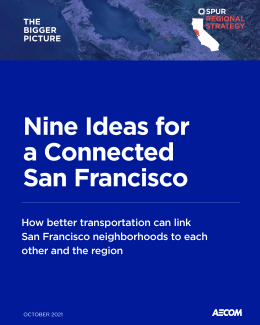 Today San Francisco’s regional transit connections focus primarily on bringing commuters from the rest of the Bay Area into downtown. Neighborhoods adjacent to Market and Mission streets have easy access to the East Bay and South Bay via BART. But many other neighborhoods have poor access to regional transit service — and to each other. The areas furthest away from downtown lack rapid and express cross-town routes, reducing local and regional job access for the people who live there.

We envision a future San Francisco where major investments in transit service and infrastructure have improved access for historically underserved neighborhoods. Where transit, biking and walking are the default options for getting around because they’re cheaper, more convenient and more fun than driving. And where this shift has reduced greenhouse gas emissions and air pollution, created more livable communities, allowed local businesses to thrive and provided far greater access to economic opportunity.

This report proposes coordinated investments that, together, could realize this vision by dramatically improving transportation access and connections to the region.

SPUR and AECOM’s Bigger Picture series proposes ideas for key locations in San Francisco, San José and Oakland, the Bay Area’s three largest cities. Each exploration represents an opportunity to tackle major regional challenges through local planning processes. And, conversely, each suggests how big investments in infrastructure can — if planned carefully — bring about positive transformation for the immediate neighborhood.