Creating a Bay Area housing delivery system that works for everyone 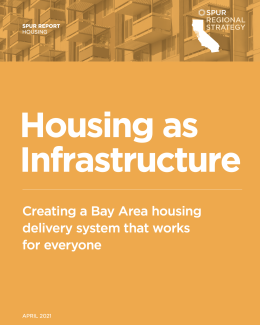 In the United States, housing is viewed as a financial asset — something to be bought, rented and sold. In other countries, housing is a human right, something that is necessary for the health and well-being of every person. In these places, housing is accessible and affordable to a broad swath of the population, and homelessness is less prevalent.

If we began to treat housing as infrastructure, what might the results look like in the Bay Area? Affordable housing would be sufficiently funded to provide homes those who needed them. Government would actively look to acquire new land and buildings and would use existing public land to create more affordable homes. The cost of producing new housing would decrease, and the supply of middle-income housing would be large enough that people weren’t outbidding each other for scarce units.

We can achieve this vision. But we must create a housing delivery system that works for everyone, not just those who can afford to outcompete everyone else for a new home. This report makes a series of recommendations to significantly change the way the Bay Area produces housing.

See the other reports in this series at Housing the Region.