Making the most of big plans for new development, a major rail expansion and a project to re-envision public green space 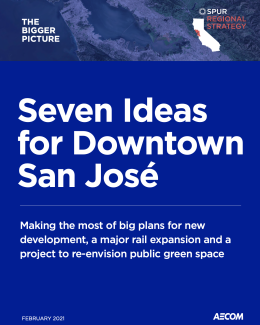 We partnered with AECOM to identify locations that have important implications for the region. The ideas we explore are not prescriptions but possibilities — offering one vision of what a more sustainable, equitable and prosperous future might look like.

Our first report in the series looks at the western side of downtown San José, where a major rail station expansion, a park re-envisioning process and a record number of proposed developments are signaling big changes for the neighborhood. We explore possibilities like redesigning elevated State Route 87 as a boulevard and turning SAP Arena into an entertainment center.