What will it take for San Franciscans to live safely in their homes after an earthquake? 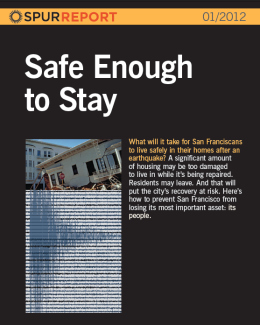 When a major earthquake strikes the Bay Area, a significant amount of San Francisco's housing may be too damaged to live in while it’s being repaired. The city has a limited number of emergency-shelter beds, and its ability to provide interim housing is constrained by low vacancy rates and minimal vacant land. This means San Francisco is at risk of losing its most important asset: its people.

To avoid a slow and arduous recovery, the city will need its residents to stay and help get schools, businesses and other community services functioning again. We believe San Francisco should take steps now to ensure that, after a major earthquake, most residents can “shelter in place” — i.e., stay in their own homes while they are being repaired. In this SPUR report, our Shelter-in-Place Task Force makes a set of detailed recommendations to help San Francisco strengthen its housing and become a truly resilient city.

The SPUR Board of Directors reviewed, debated and adopted this report as official policy on  November 16, 2011.

Safe Enough to Stay was made possible by the generous support of the U.S. Geological Survey and Degenkolb Engineers.