In total, large underutilized retail sites equal nearly 100 acres of land—and in a city where suitable land for new housing is increasingly scarce they offer a tremendous opportunity. With a modest inclusion of housing (assuming 45 units per acre), upward of 4,500 new units of housing could be built citywide.

These sites, which include large grocery stores, bank branches, strip malls, and other large retailers, were typically developed 20 to 50 years ago on a suburban model: expansive surface parking lots surrounding a single-story retail building. These developments occupy our scarce land resources, and some are unsightly or unsafe and foster loitering—especially in the parking lots. If done right, redevelopment of these sites can result in better neighborhoods and thousands of sorely needed new housing units.

Right now there are many barriers to mixed-use development in San Francisco that make owners and retailers reluctant. This paper looks at both the neighborhoods' and retailers' perspectives on redeveloping such sites, discusses the barriers, and lays out incentives that would encourage retailers to move toward this traditional urban format. These ideas can be immediately integrated into neighborhood plans, and become a zoning overlay for all such sites around the city. Our focus is on grocery stores, but the new zoning could also be applied to other single-story sites, such as bank branches.

From the community members' point of view, proposals for new higher-density, mixed-use development can raise concerns about design and appropriate scale, and parking and traffic impacts. The challenge is to identify strong planning and design measures to address these concerns and ensure that this kind of site reuse will have broad benefits to local communities. Neighborhood residents are often leery of new development, but having an expanded and improved grocery store is a great benefit for the neighborhood.

Retailers have strong feelings about what works and what doesn't work with the design of their stores. The complexities of mixed-use projects with housing over retail makes developing a plan that works for retail, housing, and neighborhood amenities a difficult—but achievable—design challenge.

If the goal is to convince storeowners to build housing, there are important barriers that must be understood. In some cases the City can help storeowners overcome the barrier, in other cases we just have to recognize there will have to be strong incentives to get storeowners to move into a format they're not comfortable with:

The City needs to find ways to entice owners and retailers to redevelop their sites with housing on top of stores (or build new stores in this way), even given all of these barriers. We need to make the opportunity so attractive to them that they are willing to take on a new retailing and architectural format.

Retail practices are changing in cities, and mixed-use projects can be an attractive strategy for large retailers such as grocery stores. Stores can get what they need—visibility, parking, and security—and local communities can get better urban design and neighborhood-serving retail. 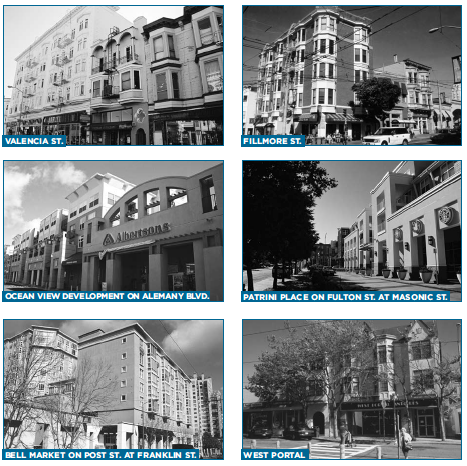 In the past, grocery stores and other retail businesses in the city were often built on the single-story suburban model. But the opportunity exists to build several levels of housing on top of these low-slung buildings. Many neighborhoods—Union Street, Filmore Street, Ocean Avenue, Russian Hill and Valencia Street, for instance—are already made up of mixed-use buildings.

For any of this to work, it's critical that the urban design and architecture be done right. In addition to including housing on upper floors, the new development should provide parking below grade (or otherwise out of sight) and public amenities-such as widened sidewalks and plazas-along with retail activity at street level. The revitalized sites should be pedestrian-friendly and contextual retail centers. Ideally, these renovations and the increased retail activity they engender should encourage improvements and revitalization of adjacent neighborhood shopping streets.

The urban design issues are more challenging with larger sites. In order to make this mixed-use format work, heights of at least fifty feet will almost always be necessary. At the same time, grocery stores need to have a good-sized footprint to have room for goods. (See the Mixed-Use Design Guidelines below for more ideas on this point.)

In cities up and down the west coast—notably in Portland , Seattle, and Vancouver—large retailers are partnering with cities to redevelop sites like these with a more active mix of uses, including substantial housing. Recently, San Francisco has begun to take advantage of the opportunity such sites offer. For example, the Petrini Place project at Fulton and Masonic includes an Albertsons supermarket, several other stores, and 135 moderately priced condominium units. Two new projects are being built soon: housing above Faletti's Market at Fell and Baker, and housing above a grocery store at 450 Rhode Island St.

San Francisco 's current zoning does not generally encourage mixed-use redevelopment of these sites. For example:

At the same time, we have no mixed-use design guidelines that provide architects, planners, and neighbors with design standards that ensure new projects improve neighborhoods at the same time that they increase housing choices.

In response to these barriers and to address potential neighborhood concerns, the Housing Action Coalition and SPUR hosted charettes with architects, developers, retailers, urban designers, City staff and others to examine these issues and develop solutions that encourage owners to consider redevelopment of their properties and make it desirable for neighbors to welcome these proposals. We propose that new zoning controls and design guidelines be developed that aim at creating incentives for owners and lessees to pursue well-designed mixed-use projects, so that when these sites undergo renovation, the opportunity for new housing is not missed. (For more detailed zoning proposals see Appendix II below.)

We have tried to think through good urban design, neighborhood character, and enticements for storeowners to move to a mixed-use format. What follows are the changes we propose to both the planning and zoning codes that would encourage housing over retail. The new zoning controls and design guidelines would apply to any large (one-half acre or larger) site in existing Neighborhood Commercial (NC) zoning districts (except NC-1 districts) whenever:

If a proposed project does, in fact, include housing by at least a 2:1 (housing:retail) ratio, we suggest the following significant incentives and changes to existing zoning:

If the proposed project does not include a housing component and is simply an expansion of the existing non-residential use (or new construction of a single-use non-residential project), the current zoning would apply—however, we believe that applicants requesting a conditional use for a non-residential project should be asked to indicate that they have studied in a good-faith effort the development of a mixed-use project and have concluded that a mixed-use project is not architecturally and/or economically feasible. In making such a showing the applicant should not be required to disclose any proprietary financial information.

We urge that such zoning be developed and we urge the Planning Commission and the Board of Supervisors to adopt these changes, coupled with mandatory mixed-use design guidelines to be applied during project review. For this change in land-use planning to be successfully implemented across the city, care must be taken to preserve and enhance the character and scale of surrounding targeted sites. Zoning changes should also be coupled with developer and community outreach to ensure that enough value is added through such projects, for both the developer and surrounding community, to encourage repetition of the process elsewhere. (See Mixed-Use Design Guidelines below.)

One good way to handle design input would be to require the developer to give advance notice to neighbors of their proposals and sponsor a series of neighborhood workshops to identify the amenities needed for the new project to proceed.

Great cities of the world, including San Francisco, have made careful use of their land by stacking uses. While there are already small and large examples of beautiful mixed-use projects in the city, our intent with this paper is to incentivize the exceptions (the single-story commercial use) to move toward this traditional pattern. It's time to bring those exceptions in line with the time-honored practice of city-building by putting homes above stores.

In order to ensure good design in housing-above-retail projects, the Planning Department should develop a set of design guidelines quite distinct from the residential design guidelines the city already has. Housing over retail poses special challenges. Here are our suggested elements of the new, mixed-use design guidelines:

For sites greater than 1/2 acre in existing NC (except NC-1) districts proposing a 20% or more retail space expansion or proposing substantial new housing.

Note: this table presents zoning only. Architectural and design treatments can be handled with in-depth mixed-use design guidelines.

This paper was written primarily by Kate White with help from Julie Christensen, Gabriel Metcalf, Anna Shimko, Steve Vettel and George Williams. It was first published in May 2004, and it was edited and updated in 2006 by Gabriel Metcalf and Sarah Karlinsky.