The High Cost of Traffic Stops

An analysis of traffic stops in seven jurisdictions across California 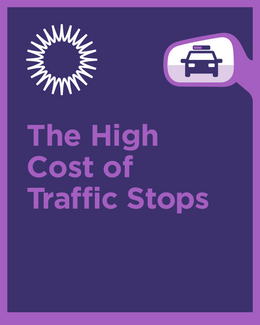 California has some of the most expensive traffic citations in the country, with California drivers paying billions of dollars in fines and fees every year. The high cost of these citations puts a significant burden on lower income people, as they are less able to pay the hundreds or thousands of dollars in unexpected expenses that can arise from a traffic stop. In order to understand the impact of traffic stops and citations on people in California, SPUR analyzed traffic stop data in seven locations across the state. Using 2019 data, which is most likely to be representative of true driving habits before the pandemic interrupted driver behavior, we used traffic stop data from Fresno, Los Angeles, Oakland, Sacramento, San Bernardino County, San Francisco and San José to study who was stopped by police, why they were stopped and whether or not they were given a citation. We looked at different regions to help understand how traffic enforcement varies, or remains the same, across California.

We found that across California traffic stops are not evenly distributed across racial and ethnic groups. Disproportionate traffic enforcement can cause significant harm to communities, particularly communities of color and lower income communities, by stripping wealth from communities and negatively impacting perceptions of police. We also found that while traffic stops and citations are supposed to make our roads safer by discouraging dangerous behavior, the data shows that, in many cities and counties, traffic stops have nothing to do with road safety. So-called “equipment violations” make up a large number of traffic stops in many locations, with cities spending police resources on things like dice hanging from mirrors or license plates attached incorrectly. Disparities in enforcement, coupled with the high cost of fines and fees in California, make traffic enforcement reform an important part of achieving economic justice.