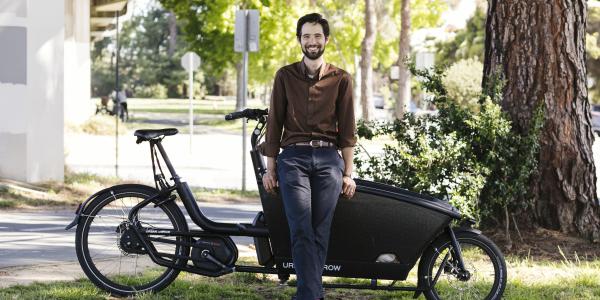 This year, SPUR is celebrating staff members — a.k.a. “Spurritos”— who have served the organization for 10 years or more. This month we profile Food and Agriculture Policy Director Eli Zigas, who launched this policy area at SPUR in 2011 and today continues to lead our work to create healthy, just and sustainable food systems and put an end to food insecurity. A strategic thinker and excellent communicator, Eli has also played critical internal roles in developing our equity platform, producing the SPUR Voter Guide and hiring new staff members. As our in-house master of wordplay, he is known for his skill at coming up with report titles, his jokes and witticisms during staff meetings, and his infectious laugh.

State dollars to be distributed in the coming year because of legislation we worked on: $5 million

Pieces of legislation involved in crafting: 8

What drew you to working at SPUR?

Eleven years ago, SPUR’s CEO at the time, Gabe Metcalf, then-Sustainable Development Policy Director Laura Tam and the SPUR Board were willing to take a chance on starting a new program focused on food and agriculture. While there were, and still are, many organizations doing great work in this area at the state and federal levels, there were few research and advocacy organizations in the Bay Area focused on food and agriculture policy at the city, county and regional levels. Local governments were being pushed to do more — on urban agriculture, food access and procurement, to mention just a few examples — and there were few organizations looking at best practices, developing policy recommendations and providing bridges between the people doing work on the ground and policymakers. We launched the Food and Agriculture program to fill that gap.

How has working at SPUR changed your view of the issues you work on?

I don’t have a planning background, and working at SPUR has made me appreciate how much housing affordability is tied to hunger. Understandably, people prioritize shelter over food. They eat less so they’ll have enough money for a roof over their head. When I started at SPUR, housing in the Bay Area was unaffordable for many people. Since then, it’s only gotten worse, with the cost of housing pinching more and more people’s budgets. Until we build more housing, and better match supply to demand, we will constantly be undermining all our other efforts to help low-income people make ends meet at a meaningful scale. And the region will continue to suffer for the failure of our own creation.

What accomplishment at SPUR are you most proud of?

We are moving down a path of taking a proven pilot program — Double Up Food Bucks, which makes healthy food more affordable for low-income Californians — and making it permanent. We launched the program in partnership with a handful of grocery stores in the South Bay in 2017 and co-sponsored legislation in 2018 that will integrate the program into the state’s safety net system, allowing it to scale much more broadly and quickly. We also co-sponsored legislation this year that would have expanded the program from providing tens of thousands of families a total of $5 million a year to buy fruits and vegetables to providing hundreds of thousands of families a total of $120 million per year. Though that legislation didn’t pass in 2022, I am proud that we had a broad coalition and strong legislative champions behind it. We now have a strong foundation from which we can continue moving this idea forward.

What do you do when you’re not working at SPUR?

I really like attending and competing in pun-offs. Competitive wordplay, it’s a thing — I have the ribbons and trophies to prove it! I’ve even helped organize two urbanist-themed pun-offs at SPUR. My favorite planning-related pun:

Why is it so difficult to get any building approved in California? It’s hard to say, there’s a je ne CEQA about it.

What’s one of your favorite spots or activities in the Bay Area?

I love visiting grocery stores in the Bay Area. They provide a fantastic window into the many communities that make our region so rich. Some of my favorites include: Arteaga’s in Gilroy; Bi-Rite, Rainbow and Duc Loi in San Francisco; and my weekly go-to, Berkeley Bowl.

If you could wave a magic policy wand and make one proposal come true, what would it be?

We definitely need more than one of SPUR’s proposals to come true to really make this region one of prosperity, sustainability and equity. With that said, one policy change I would really like to see (which is outside of SPUR’s usual scope, so the magic wand is especially handy here) is for the federal government to change its calculation of poverty to reflect that someone in the Bay Area needs more money to make ends meet than, say, someone in Mississippi. Because a one-size-fits-all definition of poverty is used to determine who is eligible for programs like CalFresh (formerly known as food stamps), it means that many, many people are struggling in the Bay Area without access to programs that could help. This is one reason why our safety net has huge holes in it, with too many people slipping through: What the federal government says is “enough” money to live on without public support is absolutely not enough money to live on in our high-cost region. Better calibrating the poverty measure would help so many more people in the Bay Area get access to help they need.