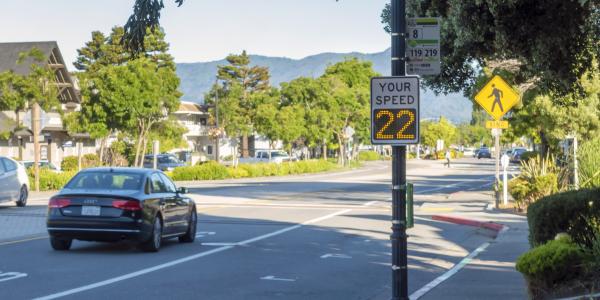 Automated speed safety systems (also known as speed safety cameras) are in place in more than 150 communities around the United States. Such systems offer the potential to reduce traffic violence and establish a more equitable framework of traffic enforcement. But those outcomes are not guaranteed. Achieving them requires thoughtful planning and design, an opportunity that California now has as legislators consider Assembly Bill 550, which would authorize a 5-year speed safety camera pilot program in six California cities. The state has an opportunity to integrate lessons from around the country and proactively advance equity for people of color and other communities most impacted by traffic violence and status quo enforcement.

Note: SPUR uses the term “traffic violence” throughout this article. Vehicle-related injuries and death have historically been referred as “accidents,” a language choice that implies these tragedies are random and unpreventable. However, research shows that the way traffic collisions are described significantly impacts how the public perceives what happens, who is responsible and what can be done about it. SPUR, along with many other advocates, prefers the term “traffic violence.”

The status quo is inequitable.

Pedestrian injuries and deaths have been rising in the United States in the last 10 years, a reversal of progress made in the previous 30 years. A large body of evidence shows that the impact of this traffic violence is disproportionately borne by communities of color and low-income people. A study of more than 49,000 pedestrian fatalities found that Indigenous people were overrepresented in traffic deaths, as compared to white people, by a factor of three. Black and Latinx pedestrian death rates were roughly double that of their white counterparts. This evidence has pointed to a number of factors, from a lack of safe road design in majority nonwhite neighborhoods to a bias against yielding to Black pedestrians in the crosswalk.

Traditional traffic enforcement itself proves to be unjust and too often, deadly. In California, Black people made up 15% of all traffic stops in 2019, despite being just 6% of the state’s population. Other data has shown that Black drivers stopped by police are nearly three times as likely to be searched by police as their white peers, despite white people who were searched being more likely to have contraband or other evidence on them. Black people are more likely to be shot by police during routine traffic stops than any other group, with one database indicating that one-fifth of all Black people shot by police are shot during a routine traffic or pedestrian stop. Today’s traffic enforcement status quo is failing to keep people safe while endangering the most marginalized and over-policed communities in California.

What benefits could speed safety systems deliver in California?

Speed safety systems have been shown to reduce violations and crashes dramatically. A broad review of studies on the effectiveness of these programs found that they reduced collisions involving serious injury by up to 50% and that these trends remained constant or improved over time.

People of color, because they are disproportionately harmed by traffic violence, might particularly benefit from reductions in crashes and fatalities; however, no research to date has specifically examined the racial impacts on injuries or fatalities as a result of these programs. With AB 550, California could lead the way in designing automated enforcement systems that collect this information and could deploy these systems in a way that advances racial and economic equity in program implementation and in its outcomes.

SPUR offers five ways to think about this opportunity.

California imposes among the highest traffic fines in the country, where the penalty for running a red light is three times the national average and almost double that of the next highest fine for this violation. The state’s system of fixed fines and fees exacts a disproportionate burden on low-income people, who forego necessities and are plunged into cycles of debt, license suspensions or jail time. Automated enforcement provides an opportunity to reform this injustice.

First, these systems create much more consistent enforcement, allowing jurisdictions to move to a model where the certainty of “getting caught” acts as a much more powerful deterrent to dangerous driving behavior than a low probability but high cost of fine. Second, these systems can reduce the need for expensive in-person enforcement, funding for which relies in part on high traffic fines. Because automated enforcement systems can deter dangerous driving behavior with consistency rather than exorbitant fines, they can be paired with significantly lower traffic fines. Both Washington, D.C., and New York City have lowered traffic fines when implementing automated enforcement. New York City’s speed safety system has reduced speeding by 63% at the average location, but charge $50 fines, as opposed to $600 citations given by police officers for the same offense. Massachusetts recently introduced legislation mandating a $25 fine.

AB 550 would set fines at $50 for driving 11 to 15 mph over the posted speed limit (with higher fines for more excessive speeding) and stipulates that a ticket would not create points on the driver's record. AB 550 would also require piloting jurisdictions to reduce fines by 50% to 80% for drivers who cannot afford to pay. The state could go a step further by creating a means-based fine system, which links a driver’s traffic fine amount to their income. (Day fines are a promising model that have been used with success in cities across the United States.) These additional reforms use fines to support the goals of deterrence, but do so in a way that is less financially harmful.

Properly designed automated enforcement systems can eliminate the need for police to enforce routine traffic laws like speeding. How? Automated enforcement provides much broader coverage of streets because cameras can be moved among neighborhoods; they operate at all hours; and their impact on driver behavior extends beyond the immediate camera location. In fact, studies have shown that the introduction of speed safety systems effectively slowed speeds at nearby intersections without cameras installed. This kind of broad, consistent enforcement has been shown to be a powerful deterrent against dangerous driver behavior. Crucially, the use of speed safety systems instead of police officers can remove the racial bias that is too common in traffic stops. Today’s traffic enforcement framework relies on infrequent, in-person police enforcement coupled with high fines and fees; a future framework, if well designed, could use a widespread speed safety system coupled with very low fines and fees for the majority of traffic violations. AB 550 takes a step in the direction of reducing the role of police officers in traffic enforcement by placing the pilot programs under the purview of transportation departments, not police departments. The pilot results should provide an opportunity to demonstrate whether speed enforcement can be done without police.

3. Understand the impacts of camera location.

Though automated enforcement has some inherent protection against the human bias that affects who is pulled over, these systems are not free from their own bias in implementation and impact: camera location is one example. As a result of decades of residential and economic exclusion, the neighborhoods with poor traffic design and high traffic violence are also more likely to be home to low-income people and communities of color (see, for example, the City of Denver’s analysis of its high-injury network). This has led to traffic cameras clustered in these neighborhoods in some programs.

Several studies have highlighted the impact of camera location and citations on people of color. A study of Cleveland’s automated enforcement system found that Black drivers received 61% of tickets despite making up only 38% of drivers — and more cameras were subsequently proposed for the city’s predominantly nonwhite East Side. A study of Washington, D.C.’s camera system found that drivers in predominantly Black census tracts were more than twice as likely to be cited than in predominantly white census tracts, despite the number of reported crashes being relatively similar across tracts (the study does not include demographic information of drivers cited, only of the census tracts in which cameras are located). The experience in Baltimore, Maryland, indicates that cameras were disproportionately located in Black neighborhoods, but that citations were given to owners from majority white and wealthier neighborhoods who were speeding through other neighborhoods to reach their destination.

Low-income communities and communities of color have been underserved by social policy for decades and often distrust systems that threaten to over-surveil or over-police. Here, California should be the national leader. An equitable camera location strategy would ensure that communities impacted by traffic violence would benefit from reduced speeding and reduced police enforcement. Use of mobile speed safety cameras is one way to enable more equitable geographic distribution of the cameras, particularly when the overall number of cameras is limited.

Importantly, speed safety systems would require collecting, tracking and sharing anonymized data about who is receiving automated citations to ensure that citations don’t fall disproportionately on people of color and low-income households. They would also direct any revenue generated by the program back into communities most impacted by traffic violence (see below). AB 550 moves in this direction by requiring piloting jurisdictions to collaborate with stakeholders, including civil liberty, racial equity and economic justice organizations, and approve an implementation plan that includes proposed locations as well as traffic safety data in impacted neighborhoods. A mid-phase evaluation and final report are required as well, which would cover all program details including a racial and economic impact analysis developed in collaboration with racial equity stakeholders.

Automated traffic enforcement systems have the potential to raise significant revenue, and some programs have been criticized as designed expressly to plug budget holes or provide new revenue streams instead of to deter dangerous driving. Baltimore, Maryland’s speed safety cameras raised $9.6 million in 2018, while Chicago’s new system is projected to raise as much as $95 million in 2021. The purpose of automated enforcement in California should be to deter dangerous driving and save lives, not raise revenue. These systems should set fines to achieve deterrence (not to raise revenue), dedicate net revenue to traffic calming measures, and make use of signage, warning tickets and other parameters to ensure revenue is not the focus. AB 550 requires that pilot programs institute 30 days of initial warnings before beginning to administer tickets, and requires excess revenue be used for traffic calming measures above and beyond existing traffic calming budgets.

Some have raised concerns about surveillance and protecting driver privacy. California's automated enforcement systems should be designed to photograph only license plates. As mentioned above, some programs have intentionally moved these systems out of the purview of police departments, and others, like the state of Virginia, have established law that stipulates camera data cannot be used for other law enforcement purposes. AB 550 builds on this by prohibiting facial recognition, making data confidential and limiting its use to that of speed enforcement.

Automated traffic enforcement has proven effective in reducing traffic injuries and fatalities, which has potential to offer particular benefit to low-income people and people of color. It also has potential to reduce police interactions by de-policing traffic enforcement, supporting lower fines, reducing bias in the location of enforcement and who is targeted, and maintaining privacy and independence from any other criminal enforcement activities. But none of these benefits are guaranteed, and many programs across the United States have failed to deliver in most of these areas. AB550 is an opportunity, not only to get these equity issues right for California, but to be a leader and establish best practices for the rest of the country. The path forward must acknowledge the severe problems with the status quo, and the necessity for California establish new equitable approach to road safety.

Thank you to Liza Lutzker, Janice Li, Dave Campbell and Leah Shahum for their contributions to this article.