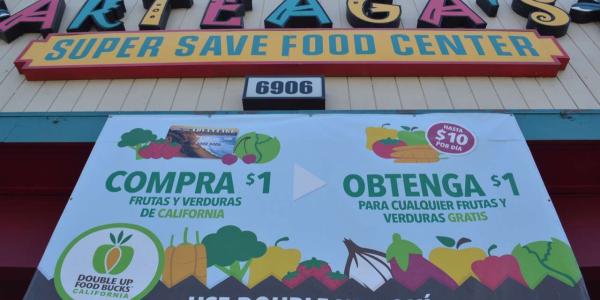 New research shows more comprehensively than ever before that healthy food incentive programs, like SPUR’s Double Up Food Bucks, improve community wealth in addition to health.

That stimulus can be quite significant when the availability of incentive programs expands to grocery stores and farmers’ markets statewide. Though current incentive programs don’t yet have that kind of expansive reach, many of the groups implementing these programs, including SPUR and Fair Food Network, want to see the programs grow to that scale. With that in mind, our two organizations engaged 10 additional partners that operate incentive programs across the country (including the Ecology Center, UC San Diego's ¡Más Fresco! More Fresh, and Vouchers 4 Veggies here in California) and a team of agricultural economists at Colorado State University to help answer the question: What would the economic impact be of expanding healthy food incentive programs statewide or nationally?

The result of that research effort is detailed in the report, The Economic Contributions of Expanding Healthy Food Incentives, which SPUR and Fair Food Network released earlier this month. Some of the findings for California are:

The benefits to California families, grocers, farmers and the economy as a whole could also be considerably higher. That’s because the study includes a number of conservative assumptions. For instance, when calculating how many incentive dollars grocery stores might see flow through their check-out lanes, the research team used an average from programs around the country: $2.10 in incentives redeemed for every $100 in Supplemental Nutrition Assistance Program dollars (called CalFresh in California and formerly known as food stamps) customers spend at the store. Across the five Santa Clara County grocery stores SPUR worked with in 2018, the average was closer to $3.66 in Double Up Food Bucks redeemed for every $100 that SNAP customers spent at the store. If the national average were closer to what we’ve seen with our participating grocery stores, the study’s estimated amount of incentive dollars that families would use to buy fruits and vegetables each year would be 74% higher. Neither CSU nor SPUR, though, can predict the future, so the conservative estimates help ensure that the research isn’t overhyping the potential benefits.

A glimpse into the future, however, may soon be arriving. The upcoming California Fruit and Vegetable EBT Pilot Project will test a healthy food incentive program design that allows CalFresh families to earn incentives when they buy California-grown fresh fruits and vegetables. Families can then redeem those incentives on any CalFresh eligible product (including dairy, bread, meat, and other food beyond produce), simply by using their CalFresh EBT card. As this is the program design most likely to scale in California in the future, the pilot, slated to launch by the end of 2021, should provide better data on how families use the program. That information would then allow the state to better estimate the investment needed to make the program available statewide. SPUR supported the creation of the pilot, has applied to be one of the pilot partners, and will continue to provide updates on its implementation on our website.

Though the estimates of this report are conservative and will be updated as we collect more data, the bottom line is clear. The federal government and states like California are well-served by their investments in healthy food incentive programs, and both state and federal policymakers would be wise to double down on these commitments. Such investments reflect real and widespread returns not only for the health of constituents, but also for the health of economies.