How Do Fines and Fees Hurt Californians — and What Can the State Do About It? 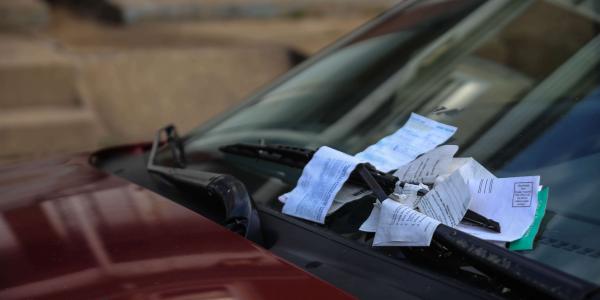 Fines and fees are an often-overlooked aspect of the criminal legal system. A closer examination reveals their place in a starkly inequitable, illogical and unjust system. Fines and fees are rooted in systemic racism, cost too much, and disproportionately impact low-income communities and communities of color. In a forthcoming policy brief, SPUR will look at the harms caused by fines and fees, and how to reduce their impact and end biased enforcement. Below are highlights from a recent SPUR Digital Discourse on the ins and outs of this complicated issue and what California is doing about it.

Inequity in fines and fees is a symptom of much bigger problems, including systemic racism, over-policing and revenue-driven solutions. It’s important to put these institutions in a historical context to better understand the inadequacies.

Panelist Stephanie Campos-Bui, of the UC Berkeley Policy Advocacy Clinic, spoke of the history of California fees, which date back to the early 1970s. She explained that the majority of fees in place today came on the heels of the 1990s “super predator” myth. This racist, now-debunked theory predicted an increase in violent crime due to a generation of Black youth who were supposedly prone to violence. As part of the effort to stave off the so-called super predators, the California legislature enacted numerous fines and fees, many that are still in use today.

California’s fines and fees spiked again in 2009 following the Great Recession. The expansion of fees was intended to fund parts of the state government during an economic downturn. During this time, both the number of fees and the cost of existing fees doubled in Alameda County. Other counties across the region saw similar spikes. When government budgets rely on revenue from fines and fees, the goal of the system switches from behavior change or community safety to revenue generation. This system incentivizes the creation of more and more expensive fines and fees that disproportionately harm Californians of color and low-income communities. It exposes a value system that puts a balanced budget above the just treatment of people.

The majority of fines and fees in use today were inspired either by baseless fears of Black youth or by revenue generation. These motivations laid the foundation for the unsustainable and unjust fines and fees we have today.

California’s fines and fees cost too much. The exorbitant charges go far beyond discouraging bad behavior and trap people in inescapable cycles of poverty.

California traffic tickets are among the most expensive in the country, and Californians cannot afford to pay them. Billions of dollars in traffic tickets go unpaid each year and, according to an estimate by the Legislative Analyst’s Office, there is at least $11 billion in uncollected fines and fees. In some years, the amount spent to collect fines and fees surpasses the revenue for counties and agencies.  When rates are unpayable, the system no longer works for people or for our cities, counties and state.

Legislators set fines at a rate they deem proportionate to the offense, which may be comparable to other states, but California tickets become unpayable because of expensive add-on fees. Elisa Della-Piana from the Lawyers’ Committee for Civil Rights  outlined an example of a $100 fine that immediately jumps to $490 with add-on fees such as state and county penalty assessments, court construction fees, identification fees and surcharges. These have nothing to do with the offense and are simply tools California uses to generate revenue.

If someone is not able to pay the now nearly $500 ticket out of pocket, a late fee is added, bringing the total amount due to just under $800, nearly eight times the amount the state legislature deemed appropriate for the offense. These tickets are too costly for everyone, but especially for people of color, who are disproportionately targeted for tickets, and for people who cannot pay out of pocket and face expensive late fees. As panelist Anne Stuhldreher of San Francisco Financial Justice Project put it, “We should be able to hold people accountable without putting them into financial distress. We should be able to balance our budgets in ways that are not on the backs of the lowest income folks in our state.”

Our most vulnerable populations are more likely to face escalating consequences.

Inequity at Every Step in the Process

Who gets ticketed? Who is awarded assistance? How harshly are punitive measures enforced?  These determinations will never be equitable as long as the legal system is rooted in systemic racism and discretionarily enforced by judges, police and others.

According to a report by the Lawyers’ Committee for Civil Rights of the San Francisco Bay Area, Black adults in California are up to 10 times more likely than white adults to be cited for a low-level infraction. Many Californians loiter or jay walk, but the people who are ticketed for these common offenses are much more likely to be low-income people or people of color. Most fines and fees offer ability-to-pay determinations and sliding scale processes to mitigate their burden on low-income people. However, these stopgap solutions do not work in practice because there are no formal guidelines for how to qualify, which means judges make decisions based on highly subjective perceptions, like how expensive someone’s shoes appear. An added barrier is the imbalance of responsibility: The burden of proof is placed on the person who is unable to pay, not on the court. There is no way to make a system fair when it is built on an unjust foundation, which is why all of the panelists advocate for doing away with fees rather than amending them.

Beyond the Monetary Burden

The harm done by fines and fees does not stop at exorbitant prices: Unpaid fines and fees affect credit scores and can even lead to pull-overs or arrests, and current loss-of-licence and towing policies threaten people's ability to drive to work or to pick up loved ones. The consequences have a ripple effect that can leave lasting damage.

The cost of fines and fees does not just burden one person — it places strain on key familial relationships and communities. Paul Briley of Legal Services for Prisoners with Children spoke of his reluctance to call family when he was in prison because of the monetary burden that prison phone calls, which must be made collect, placed on his loved ones. Prior to recent reforms, Briley noted that San Francisco was generating $1.7 million a year from families of incarcerated people. These burdens fell on the loved ones, who are disproportionately low income and people of color.

What is California doing about it?

In recent years, successful efforts have begun to reverse the rise in cost of fines and fees. San Francisco has become a national leader in eliminating regressive fees. Coalitions like Debt Free Justice California, made up of dozens of groups from across the state and the nation, continue to advocate in the state legislature for abolishing fees. These efforts have resulted in some big successes.

San Francisco’s People Over Profits Ordinance is the first statute of its kind in the nation. It ends the practice of generating revenue from products and services for incarcerated people and their families. The ordinance permanently made jail phone calls free and ended price mark-ups on commissary items. It has become a national model that other regions are now pursuing.

Other wins include Senate Bills 190 and 1290, which effectively made California the first state to abolish all fees in the juvenile justice system, and Assembly Bill 1869, which eliminated 23 of the most harmful fees in the adult legal system. Nevada and Maryland have followed California’s lead with laws similar to AB 1869.

While AB 1869 has done a lot to improve the burden of fines and fees, it did not touch more than 60 existing fees that still harm people and families in the justice system. The work to abolish fees and end the harmful consequences of fines continues. In an upcoming policy brief, SPUR will examine traffic citations and identify policy solutions for removing racial bias from traffic enforcement and ending the financial devastation that fines and fees have on low-income and working people.

Listen to the recording of this program