How to Solve the Transit Budget Crunch: Price the Private Use of Public Streets 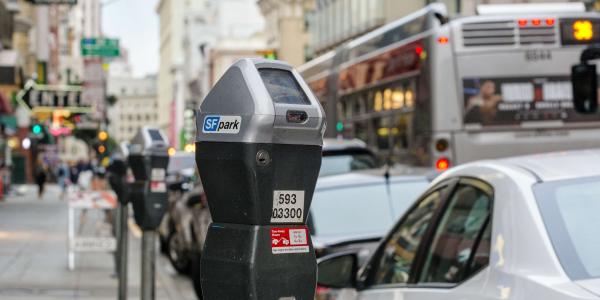 The following guest post by two UC Davis law professors explores an idea raised in The True Cost of Residential Street Parking, a SPUR Digital Dialogue held in November and co-presented by Urban Environmentalists. Watch a video of the original conversation. Many thanks to Professors Elmendorf and Shanske for diving into the question of whether California cities can legally charge market rates for parking, and to Urban Environmentalists for co-publishing this post with us.


COVID-19 has been catastrophic for public transit. Plunging fare and tax revenues are forcing drastic cuts. San Francisco’s transit agency could lay off more than one in five workers. Los Angeles is cutting service by 20%. Washington, DC is proposing to shutter 16% of its stations and eliminate weekend rail service. State governments can’t provide stopgap funding because they’re constitutionally constrained to balance budgets (though there is some room for creativity). Congress ought to step up, but Mitch McConnell stands in the way.

We think there’s a solution right under our feet: Make private drivers pay market rates to use the public’s roads. Traditionally, transit customers have had to fork over hefty fares, while private drivers go for free. The result is congestion, endless circling for parking spaces, Ubers and Lyfts blocking bike lanes and bus stops, and, at this precarious fiscal moment, a huge pot of potential revenue waiting to be claimed.

The place to start is residential parking. San Francisco has 275,000 curb parking spaces, only 10% of which are metered. Another 80,000 are in restricted residential parking zones. For a trivial annual fee, residents park without limit in their zone. Meanwhile, garage parking in the city costs on the order of $200 to $500 a month. Street parking isn’t worth as much as garage parking, and the value of a curb space would vary a lot from one neighborhood to the next. But even if the average curb space in the city were worth only $100 per month, the city could be earning $300 million a year from the street parking it now gives away. That’s almost double the transit agency’s forecasted deficit next year.

Cities less dense and affluent than San Francisco probably couldn't generate as much revenue this way. But with a little creativity, they could use the future value of street parking to close present budget gaps. For example, they could sell market-rate parking passes that would be valid for several years, or issue annual permits while converting the future revenue stream into marketable securities. Similarly, if a city is concerned about introducing a new charge during the pandemic, it could commit to imposing the charge next year or later — but start borrowing against the revenue stream now.

How would a city that decides to charge market rates for residential parking figure out the price? UCLA professor Donald Shoup recommends a uniform-price auction. The city would determine the number of parking spaces on a block or in a zone, and then invite bids for annual permits to park in that area. Permits would be allocated to the top bidders at the lowest price that any of them offered. For example, if a block has 20 spaces, the top 20 bidders would each win a space, and they’d pay the amount of the 20th highest bid.

Another pricing strategy is to adapt the “variable rate” model that San Francisco and other cities are already using for metered parking in commercial districts. In these districts, the metered rate adjusts gradually in response to demand, ensuring that there’s usually an open space (but no excess of open spaces) on each block. Street parking in residential neighborhoods could operate on the same principle, albeit with parking allocated through residential permits rather than meters. The city would set the initial price for residential permits in each zone based on a “guestimate” of their value, and then gradually adjust the price upward or downward every few months until the number of subscribed permits is equal to the number of curb parking spaces in the zone.

Charging market rates to use the curb lane would yield all sorts of other benefits, too. Some residents would decide the costs of private car ownership are no longer worth it. They’d sell their cars, decongesting crowded streets and reducing greenhouse gas emissions. Car-sharing, bike-sharing and ride-sharing companies could bid for curb space, expanding services throughout the city. Visionaries who foresee non-parking uses of the curb should be invited to join the bidding, too. More parklets and street-side eateries would enliven the city scene.

An objection to more expensive street parking is its potential to hurt people with low incomes. But programs to price the curb lane could be fine-tuned with discounts for low-income residents and small businesses. The revenue could also fund free transit passes for low-income households, since not all of them own cars.

Alternatively, the city could pursue an incremental pricing strategy that would allow everyone who now has a residential permit to continue parking as they always have. San Francisco recently piloted a “Paid + Permit” model for blocks adjoining commercial districts. Residents park for free while visitors pay market rates using meters or their phone. This pilot brought in more than half the revenue of fully metered commercial blocks nearby. Extending the Paid + Permit program to the 80,000 curb spaces now covered by the city’s residential parking program would generate a lot of revenue—and without a political fracas over charging residents for something they’re accustomed to getting for free (or, more precisely: accustomed to paying for with time and gas as they prowl for parking, rather than paying for with money).

But Is It Legal?

The main argument against market pricing of the curb lane is a legal one. States have constrained local fiscal authority in various ways, so there’s no uniform answer to the legality question. But in California, at least, the answer appears to be “Yes.”

There is a common perception that the California Constitution, which strictly limits local taxes and fees, or the California Vehicle Code, which sets rules for public streets, allows cities to charge only “cost recovery” fees for residential parking. (A cost-recovery fee raises only enough revenue to cover the costs of administering a program.) We believe this perception is incorrect.

As the state supreme court recently explained, “the right to use public streets ... is a property interest [which a local government may] sell or lease … and spend the compensation it receives for whatever purposes it chooses.” Jacks v. City of Santa Barbara, 3 Cal. 5th 248, 254 (2017). Under Jacks, charging people to use public streets would count as a “tax” only if the charge did not bear a "reasonable relationship to the value of the property interest." So long as the city does not set the price for residential parking so high as to result in a large excess of unused curb space, the city’s fee-based parking program should pass muster.

Jacks interpreted “tax” as defined in Prop. 218, not as recently refined by Prop. 26. Nevertheless, the court discussed Prop. 26, and there’s not much reason to think the analysis would come out differently under Prop. 26 because, at least as to this aspect of the definition of tax, Prop. 26 appears to have codified the pre-existing common law analysis applied in Jacks. The court said as much in City of San Buenaventura v. United Water Conservation District, 3 Cal. 5th 1191, 1210 (2017). Two related Prop. 26 cases are now pending before the California Supreme Court. One goes beyond Jacks, holding that fees for use of public property are categorically not taxes, however exorbitant the fee. The other one extends Jacks to Prop. 26. Under either approach, market-rate fees for residential parking would be permissible (“not taxes”).

The only constitutional issue we’re at all concerned about is the possibility that a residential parking fee would be characterized as an “incident of property ownership.” Under Prop. 218, fees imposed as an incident of property ownership are limited to cost recovery. However, this potential problem could easily be sidestepped by allowing people who don’t own or rent property in a zone to purchase curb-use permits. Even if the permits were restricted to owners and renters in the zone, it’s doubtful that Prop. 218 would be triggered, because the right to park in a zone is not a service provided “to any particular parcel.” See City of San Buenaventura, 3 Cal. 5th at 1207-1208 (holding that groundwater pumping fees are not “incidents of property ownership” because “the agency provides no service to any particular parcels”).

That fees to park on public streets are not “taxes” under the California constitution has another implication of some practical importance: they can be adopted by any duly authorized governmental body, with no need for a popular vote. Solving the transit agency budget crunch need not wait until the next election.

As the Attorney General has explained, California’s Vehicle Code gives cities “broad power to restrict parking on public streets, and the … specific power to adopt preferential parking programs that exempt residents, merchants, and their guests from [the general restrictions].” CVC 22507(a). Notably, nothing in CVC 22507(a) says anything about fees that may be used to “restrict parking,” or about fees that may be charged to residents and merchants who benefit from a “preferential parking program.”

The Vehicle Code does insist that if cities charge homeowners to park across their driveways, the fee be set at the cost-recovery level only (CVC 22507.2). But no such limitation is mentioned in the section of the Code about regular street-parking permits (CVC 22507). In fact, the distinction between 22507.2 (driveway permits) and 22507 (other permits) seems to anticipate Proposition 218’s limitation on fees “imposed … as an incident of property ownership.” The fee to park across one’s own private driveway is arguably incidental to property ownership, whereas a fee to park anywhere in a zone is much less likely to be characterized in that way.

Section 22508 of the Vehicle Code authorizes metered zones with variable, demand-responsive hourly rates. Perhaps one could argue that by not mentioning demand-responsive rates in other sections of the Code, the legislature implied that cities may not charge market rates for monthly or annual permits on non-metered blocks. That argument’s a reach, but even if it were correct, cities could just meter their residential zones while issuing (market-rate) monthly or annual permits that entitle the permit-holder to park without feeding the meter. Nor is a meter at each space required. One meter can serve several physical blocks, supplemented by permits or pay-per-phone.

Here’s the bottom line: The question of what and whom to charge for using the curb lane is a political and policy question for California cities, not a legal matter. Yes, someone will probably sue if a city raises the price of parking—but they’re not likely to win. Making drastic cuts to the transit budget is a choice, not an inevitability. There is a better way.

Chris Elmendorf is the Martin Luther King, Jr. Professor of Law at the University of California, Davis.

Darien Shanske is a professor of law at the University of California, Davis.