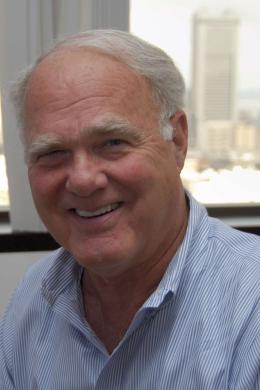 John Stewart was a pillar of the real estate and affordable housing communities across California. Founder and chairman of the John Stewart Company, John was an entrepreneur who devoted his life to providing high quality, well-designed, well-managed affordable housing. Today the company manages over 420 projects with 33,000 units, housing 100,000 residents statewide, and is owner or general partner of a substantial number of these.  Notable recent projects include Mandela Gateway (with Bridge Housing) in Oakland, Casa Feliz (with First Community Housing) in San Jose, and Hunters View (with Ridge Point Non-Profit Housing) in San Francisco.

Hunters View is the inaugural HOPE SF project, replacing deteriorated public housing constructed in the 1950s on the foundations of WWII navy housing. John worked with Mayor Newsom in conceiving the Hope SF program when the federal government defunded the HOPE VI program intended to rebuild some of the most dilapidated public housing projects in the nation. The John Stewart Company subsequently was selected to create a mixed income project that better integrates into the rest of  San Francisco.

John was dedicated to progressive social causes, crafting frequent op-eds in the Chronicle and the Business Times, writing articles for the Urbanist, and coaching SPUR staff on the intricacies of using housing tax credits or infusing private investor capital into projects to create and preserve sound, long-term affordable housing. John and his wife Gussie supported causes and organizations they believed deeply in, including SPUR, affordable housing groups, and liberal political candidates. John founded a group, Tax Us More, of people who had “done well” and asked the government to raise their taxes to support a more just society. This group held a very lively rally on the steps of San Francisco City Hall.

John was a graduate (and football star) at Stanford, was a member of the Advisory Committee on Low- and Moderate-Income Housing to the Federal Housing Administration Commissioner in Washington, D.C., a presidential appointee to the board of directors of the National Cooperative Bank, and chairman of the National Cooperative Bank Development Corporation, which makes loans to low-income housing, medical, and agricultural cooperatives. He has been an advisor to the Deputy Assistant Secretary for HUD, a director on the boards of the Low Income Housing Fund of San Francisco and the National Housing Conference of Washington, D.C. He was a SPUR board member from 2000 to 2008, and received a Silver SPUR in 2012 for his commitment to improving lives through quality affordable housing.  In addition, he had a marvelous sense of humor, which made working with him a real pleasure. We will miss John and are grateful for all that he has done to support affordable housing.

John K. Stewart was recognized for his efforts in