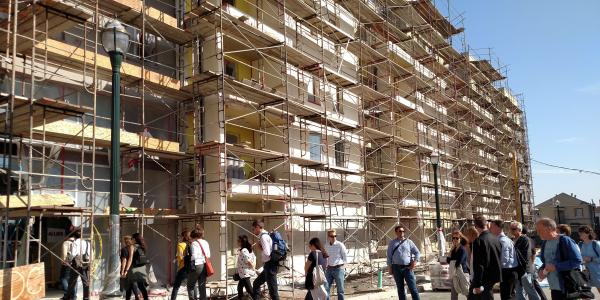 Photo by Christopher Ulrich for SPUR.

As the end of the regular State Legislative Session approaches, some key housing production bills — though now in diminished form — continue to move through the legislative process, including bills sponsored and supported by SPUR.

In addition to COVID-19 response, housing policy continued to be a key priority for the Legislature. Many other topics fell by the wayside due to the complications of the truncated session, public health protocols, compressed hearings that included input from multiple committees, virtual testimony, and proxy and remote voting.

Here’s a round-up of the key bills SPUR is sponsoring or supporting.

AB 831 (Grayson), provides clarifications and technical clean-up to the successful SB 35 housing approvals streamlining legislation of 2017, which made multifamily housing with affordable units faster and easier to build. This measure clarifies that minor design modifications are allowed; necessary off-site improvements required must also be approved; and the requirement that mixed-use developments must be two-thirds residential to qualify applies to the proposed project, not the zoning. The bill has an “urgency clause” which would allow it to take effect immediately if a two-thirds majority in both houses votes in favor. SPUR was the lead witness for the bill in the Senate Housing Committee, where it passed on a 10-0-1 vote. It now heads to the Senate Appropriations Committee. The bill is co-sponsored by SPUR and the Bay Area Council.

AB 2553 (Ting and Berman), would allow cities and counties to declare a shelter crisis, allowing them to suspend building standards and provide exemptions from the California Environmental Quality Act (CEQA) for emergency shelters and safe parking programs. Legislation in previous years provided such waivers and streamlining for select cities and counties as a pilot program, and we now have models such as Oakland’s Community Cabin program and San José’s Bridge Housing Communities program to follow. This statewide bill was approved by the Senate Housing Committee on a 11-0 vote and now heads to the Senate Appropriations Committee. The bill is co-sponsored by SPUR and the City of Sacramento.

On May 20, Senate President Pro Tem Toni Atkins and a group of senators announced their Housing Production Legislative Package, which SPUR has strongly supported. These five bills passed the Senate and are now in the Assembly. In some cases, they have been or will be significantly amended due to opposition, reducing their potential scope and impact and one bill failed in committee.

SB 902 (Wiener) would exempt from CEQA city or county ordinances to zone parcels for up to 10 units in transit-rich, jobs-rich, and urban infill areas. The bill would require the California Department of Housing and Community Development (HCD) to publish and update a map of jobs-rich areas every five years. The bill is sponsored by California YIMBY and SPUR supports SB 902. The bill passed out of the Assembly Local Government Committee and now heads to the Assembly Appropriations Committee.

SB 995 (Atkins) would extend for four years the end date of the AB 900 Environmental Leadership Development Projects program. The program provides expedited CEQA administrative and judicial review for projects with a minimum investment of $100 million that are certified LEED Gold or better and achieve a 15 percent greater standard for transportation efficiency than for comparable projects. Over the past decade, this program has been responsible for facilitating more than a dozen major mixed-use developments across the state, and proposed projects include thousands of units of market-rate and affordable housing. In addition, the bill has been amended to lower the minimum investment threshold for qualifying infill housing projects to $15 million. SPUR supports SB 995. On Thursday, August 6, the bill was approved by the Assembly Natural Resources Committee and is now in the Assembly Appropriations Committee.

SB 1120 (Atkins) would require that duplexes and lot splits in residential single-family neighborhoods be approved “by-right,” meaning they would not be subject to case-by-case local approvals or review under CEQA, as long as they create lots no smaller than 1,200 feet. In cases that both split a lot and put duplexes on each resulting parcel, the jurisdiction is not required to also permit an ADU. SPUR supports SB 1120. The bill was approved by the Assembly Local Government Committee and now heads to the Assembly Appropriations Committee.

SB 1385 (Caballero), known as the Neighborhood Homes Act, would establish housing as an allowable use in commercial zones. Local zoning, parking, and design standards would apply as would the corresponding default density in housing element law as the minimum. SB 35 streamlining would be allowed for office or retail centers in which at least 50% of its usable square footage has been vacant for at least three years. SB 1385 is sponsored by The Bay Area Council and California Forward and SPUR supports SB 1385. However, the bill failed to pass out of the Assembly Local Government Committee on Tuesday, August 11 on a 3-2-3 vote. There is now no bill in the Legislature facilitating the development of housing in commercial zones. This is a tremendous missed opportunity particularly given the changing nature of the office and retail sectors, the pronounced move toward more mixed-use developments and demand for walkable neighborhoods, as well as the recent emphasis on the redevelopment of underutilized and legacy commercial centers - all coupled with the ongoing housing shortage.

SB 899 (Wiener), while not formally part of the Senate package, has much promise. This bill would allow 100% affordable housing developments by-right on land in an urbanized area owned by a religious institution or nonprofit college regardless of the zoning. Prevailing wages are required to be paid to construction workers.

UC Berkeley’s Terner Center for Housing Innovation has studied the scope and impact of this legislation, as well as that of AB 1851 (Wicks), which would eliminate replacement parking requirements for developments on land owned by religious institutions that qualify for a density bonus. The policy brief finds “that approximately 38,800 acres of religious institutions’ land - equivalent to the size of the City of Stockton - could potentially support new housing development, including in some of the state’s highest-cost counties.” SB 899 is sponsored by the Non-Profit Housing Association of Northern California (NPH) and the Southern California Association of Non-Profit Housing (SCANPH) and SPUR supports SB 899. The bill is currently in the Assembly Appropriations Committee.

Housing production bills that originated in the Assembly and are now in the Senate include:

AB 2345 (Gonzalez), modeled on a City of San Diego ordinance, would provide an enhanced density bonus of up to 50% and would allow up to five incentives or concessions based on the percentage of affordable units included in a project and how affordable they are. SPUR supports AB 2345. The bill was approved by the Senate Housing Committee and sent to the Senate Appropriations Committee.

AB 2323 (Friedman and Chiu) would make changes to CEQA urban infill exemptions to allow specific or community plans to serve as the basis for the exemption; increase the size of an eligible infill housing site to five acres; and allow exemptions for projects in “very low vehicle travel areas” as defined. SPUR supports AB 2323. The bill was approved by the Senate Environmental Quality Committee and now heads to the Senate Appropriations Committee.

AB 3279 (Friedman) would revise the procedures for CEQA litigation in order to reduce inefficiencies, disputes and delays. It would allow the agency that has the responsibility to approve the project to elect to take on the preparation of the administrative record, as long as it also agrees to seek no reimbursement from the petitioner. SPUR supports AB 3279. The bill was approved by the Senate Environmental Quality Committee and now heads to the Senate Appropriations Committee.

AB 3153 (Robert Rivas) would allow housing developments to reduce by up to 30% the required number of parking spaces if a minimum number of long-term bicycle parking spaces, car-share parking spaces or both are provided instead. This bill is sponsored by the California Bicycle Coalition and SPUR supports AB 3153. The bill was approved by the Assembly in June and then referred to the Senate Governance and Finance Committee but was never set for a hearing.

Time for Urgency and Swift Action

The Legislature has also been working on legislation to address the economic impacts of the COVID-19 pandemic. AB 1436 (Chiu) would extend the statewide moratorium on evictions for rental debt due to COVID-19-related financial distress. SB 1410 (Caballero and Bradford), a renter/landlord stabilization program, would create a voluntary option to allow tenants to repay back rent to the state over a decade while providing tax credits to participating landlords. The latter bill could have a potential fiscal impact to the state’s general fund in the billions of dollars over the life of the program. As of this writing, there is no federal funding on the horizon to help states and cities address budget shortfalls resulting from the pandemic.

Governor Newsom has until September 30 to act on bills sent to his desk at the end of the session. While the legislation that continues to move this year certainly represents some positive progress in addressing the state’s housing availability and affordability crisis, we strongly believe the governor and legislative leaders must, once this session is concluded, immediately convene environmental, labor, equity, neighborhood and developer stakeholders. Together they should forge consensus, agreements and a path forward to increase the supply of subsidized affordable housing, housing that is “affordable by design” without subsidy for middle-income households, and homeownership opportunities for lower- and moderate-income households and households of color.