The First Success in Getting Back to Business Safely 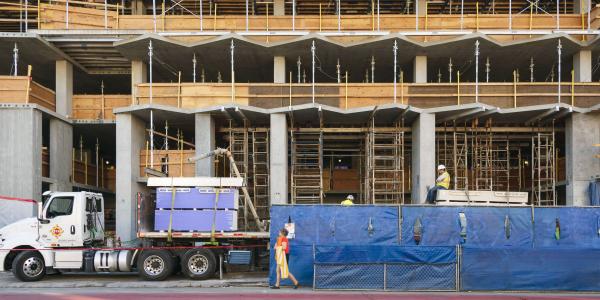 The first month and a half of shelter-in-place orders was a time of confusion, frustration and significant loss of business for those who work in development and construction. Bay Area counties banned most construction as part of the region’s effort to halt the spread of the novel coronavirus, but the rules varied from county to county and there was initial uncertainty about how to interpret them, making it hard for builders to know whether or not their projects could proceed. SPUR jumped into action to get our members the information they needed and to advocate for finding a safe way to resume work. Thanks in part to the efforts of SPUR and other partners, the counties issued a second health order in early May that allowed all construction to resume, with strict health protocols in place.

Since the COVID-19 pandemic began, SPUR has pivoted to rapid response programming to ensure that we are continuing our work to bring people together to address the big problems cities face. In late April, while the bans were still in place, we gathered Oakland Director of Planning and Building Bill Gilchrist, San Francisco Director of Housing Delivery Judson True, and San José Director of Planning, Building and Code Enforcement Rosalynn Hughey on a call with 110 of our business members to explain the nature of the construction bans. All were eager to hear directly from the officials responsible for enforcing the ban and for the opportunity to ask about what types of construction were and were not permitted, when the ban might be modified and what steps the construction industry could take to make work sites safer for construction workers.

All three of the speakers noted that the overwhelming initial concern was for saving human lives and preventing the region’s health care system from being overwhelmed by a wave of COVID-19 patients. Seven weeks into the shelter-in place-directive, it was becoming clear that future directives would need to take account of other factors — like the region’s unemployment rate and its supply of housing, especially affordable housing. With this in mind, the speakers noted that the interpretation of the directives was changing and that the challenge they faced was in how to interpret them correctly.

The audience was eager to help influence that interpretation, asking how they could respectfully and appropriately advocate to open up multi-family housing construction. Others wondered if there were any processes being introduced to streamline construction (video inspections, for example) that might remain in place after shelter in place.

SPUR’s efforts to connect our membership to those who were making the decisions about their industry complemented similar actions being taken by the Metropolitan Oakland Chamber of Commerce, the Bay Area Council and others. SPUR also sent letters in support of allowing construction to Bay Area public health officers and city and county leaders. Within a week of the forum, the counties issues their new directives allowing construction to proceed.

As Santa Clara County Supervisor Dave Cortese told KTVU, this change didn’t come about because the risk disappeared. Instead it happened because together “we have figured out a way to go forward.” Figuring out how to go forward together is the only way we will overcome our current challenges. SPUR will continue to bring our members and the broader Bay Area community together so we can do just that.