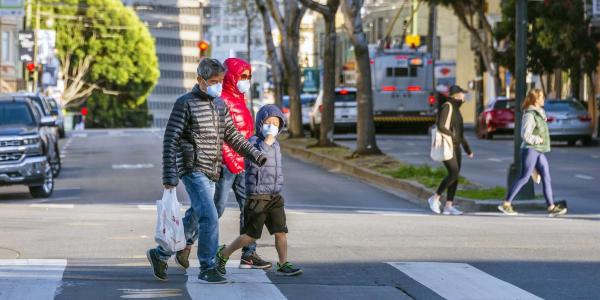 Every disaster exposes the fissures in society that existed before the crisis began. The COVID-19 pandemic is a shock event that has exposed the deep inequality baked into our economic system —– and one that highlights the intertwined relationship between the economy and the housing market. Millions of people have filed for unemployment over the past several weeks, representing a 3,000% percent increase in unemployment claims at the time of this writing — a number that is only likely to rise. Local businesses are teetering on the brink of closure. The recent federal stimulus bill has propped up the nation’s frail safety net, but the supports being offered are nowhere near the levels of other industrialized countries.

In response, Governor Gavin Newsom and local jurisdictions including San Francisco, San Jose and Oakland have taken steps to halt evictions in the near term. And the federal government has placed a 60-day moratorium on foreclosures of mortgages backed by Fannie Mae and Freddie Mac (quasi-governmental institutions that guarantee mortgages). These steps will hopefully help keep many people in their homes during this financially uncertain time. But the question remains: What happens after the near-term crisis ends? Will businesses reopen and jobs resume? For many living paycheck to paycheck, it will be tough or even impossible to weather the storm once the emergency period is over.

Housing Insecurity: Not a New Problem

Affording a place to live in the Bay Area was a challenge even before COVID, especially for low- and moderate-income households. In the immediate aftermath of the pandemic, it will be that much harder. This crisis has highlighted a fundamental truth: Housing insecurity is a threat to our society — both at the height of the market and during crises like a pandemic. By understanding what caused housing prices to escalate over the past decade, and how that has impacted who can and can’t afford to live here, the region can make a course correction that can help in both the short and the long term.

SPUR’s recent housing report, What Will It Really Take to Create an Affordable Bay Area, outlines the causes of the underlying housing crisis and the steps needed to make the Bay Area an affordable region over the long term. We identify two interlocking factors that caused the housing price spike of the past decade. First, the Bay Area failed to build a sufficient amount of housing over the last two decades, creating a shortfall of 699,000 units, most of them for households below the area median income (AMI). 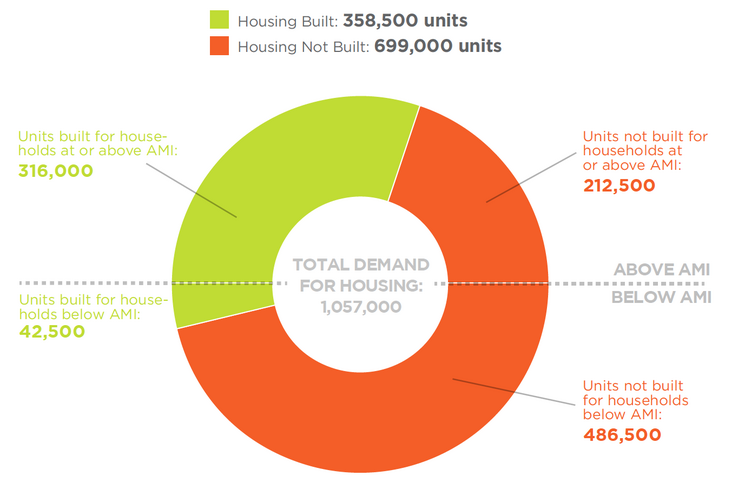 Second, the Bay Area had become 50% wealthier over those same two decades, enabling those with the most money to outbid everyone else for scarce housing, thus causing housing costs to skyrocket.

The report also identifies what the long-term housing needs of the region will be — and how much housing the Bay Area will need to build over the next 50 years in order to house future residents. While the jobs assumptions that drove these numbers may change based on the impact of the current crisis, the long time horizon of the analysis means that the overall demand trajectory may largely be the same. We estimate that the region needs an additional 1.492 million housing units over a 50-year period to address future population growth.

How Much Housing Does the Region Need to Build?
Projected Bay Area Housing Demand at All Income Levels, 2018–2070 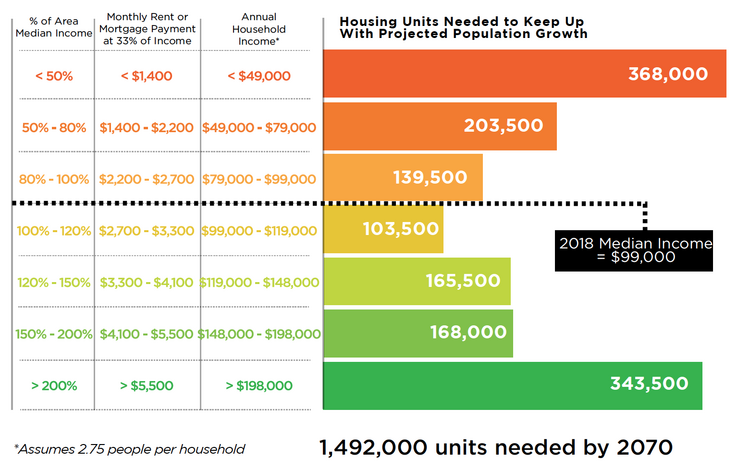 Adding the shortfall to the future housing demand, we estimate that the Bay Area needs to create a total of 2.2 million housing units over a 50-year period, or roughly 45,000 units annually.

While the ramifications of the current crisis on long-term housing trends will remain unclear in the near term, there are lessons we can draw today:

Once the immediate public health threat has been addressed, the Bay Area will still face significant economic hardship. This will present both challenges and opportunities for housing.

We are all hoping that the immediate health crisis facing us can be ameliorated in the coming months through a combination of more sophisticated and widely available testing, the mass manufacturing of medical equipment to protect health workers and keep seriously ill patients alive, and the development of anti-viral medications to treat infected patients. A vaccine is more than a year away from being widely available. Over this time, and probably beyond, our economy will continue to be strained.

As available sources of capital for housing production dry up, the public sector will have decisions to make about what interventions to prioritize with limited resources. At the same time, there will be many opportunities to create a more affordable region — opportunities that weren’t available at the height of the market boom. These could include buying land for future affordable housing development, buying deals that fell through or distressed properties and converting them to permanently affordable housing, and recruiting and training the construction workforce of the future. This is also a moment to focus on the social safety net — helping people in ways that can mean the difference between being able to pay the rent and not, such as providing rent deferments and health care and unemployment benefits. Leaders in the Bay Area should develop a robust unified plan to advocate for measures at the federal and state level that will help create an affordable region over the long term. This plan must include new sources of funding for housing that can be deployed strategically to make the most of this moment.

Building housing at the bottom of the market rather than the top, which we call for in our report, has become a much more immediate need. The state and the region can take steps to make it happen.

Almost all housing is built during the “up” part of an economic cycle, when rents are rising sufficiently to cover the costs of construction. Construction costs also increase during the up cycle — in part because the construction labor market becomes tight. Between 2014 and 2019, construction costs rose by more than 40 percent. By finding ways to build both market-rate and affordable housing during an economic downturn, it is possible to deliver housing before it is desperately needed (such as when the economy is rapidly adding jobs but not housing for new workers entering the labor market). It is also possible to take advantage of potential savings in both land costs and construction costs. And by smoothing out the construction labor market (instead of laying workers off during a downturn and then attempting to rapidly add them during an upturn), construction workers can stay employed and modular factories can stay open to build badly needed housing.

Building affordable and market-rate housing during the downturn will require new financial and policy tools. Creating affordable housing will require subsidy dollars, both for new construction of affordable housing and to purchase existing buildings that may be financially insolvent and make them permanently affordable. Market-rate housing may require tools like tax abatements, and loan guarantees as well as more limited forms of subsidy that can eventually be recouped in the form of long-term affordability of some units once the market heats up again. All housing will benefit from streamlining the onerous process to build housing. By-right housing, CEQA reform and other streamlining measures should be implemented during the downturn to help jumpstart housing delivery.

If we can house our most vulnerable people during a crisis, we can house them after the crisis is over — but only if we make it a priority.

One of the most remarkable aspects of this crisis is the way it has highlighted our interdependence. The virus infects high-income and low-income people, it infects people who are housed and not housed. The impact of a highly contagious virus in a homeless encampment is not about “those people”, it is about everyone who is interested in stopping the spread of COVID-19. The increased political will to get people off the streets and into housing during this period has resulted in cities, counties and the state contracting with hotels to provide temporary shelter, as well as taking other steps to expand access to shelter. If we can take these extraordinary steps during the pandemic, we know have the ability to act once the crisis is over.

We are in a moment of crisis and of uncertainty. But by thinking clearly, acting proactively and keeping long-term goals in mind, we can use this opportunity to build a stronger and more affordable region.