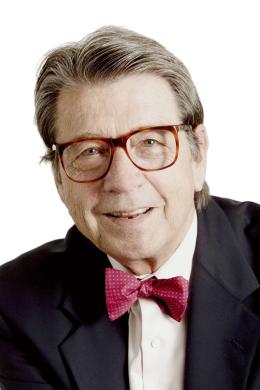 John Lund Kriken, FAIA, was a retired Skidmore, Owings & Merrill (SOM) partner and the founder of the firm’s Urban Design and Planning Studio, where he helped turn the firm into one of the world’s most famous designers of cities. His plans and designs are legion across the Bay Area and Asia.

I first met John in the early 1980s when we were both engaged to work on a proposed (later abandoned) San Jose world headquarters for Steve Jobs’ Apple. The SOM contingent — featuring John and three acolytes all attired in dark suits, white shirts and bow ties — arrived in one of the firm’s fleet of enormous Buick station wagons, large enough to carry the large drawings and models John and the firm were justly famous for. As the huge base map was rolled out on the table, John sat down, fat 6B pencil in hand, and made great sweeping motions across the trace, worthy of the action painters Jackson Pollack or Willem de Kooning. We all sat transfigured. As his assistants handed him a series of sharpened pencils, one after the other, there emerged a family of drawings that were pure poetry. I was hooked.

Soon thereafter I recruited John to be a leading board member in the San Francisco Architectural Foundation, the nonprofit public benefit arm of the local chapter of the American Institute of Architects. John was a fellow in the AIA, recognized by his peers for his extraordinary design talent. He was a charter member of the American Institute of Certified Planners, and his office walls were filled with honors from those organizations and others. And what an office! Not your usual architect’s office with a drafting table, and perhaps a conference table in the corner, but an otherwise empty space centered around a square conference table and four Alvar Aaalto birch armchairs that put the visitor in an almost reclining position … singularly inappropriate for you to in any way lead the discussion, but perfect to follow John, always the brilliant practitioner and showman.

John’s formal association with SPUR began in 1995 when we brought him on as a new member of the board of directors and as co-chair, with Ron Blatman, of the newly formed SPUR Urban Development Committee. That pairing brought a broad focus — economics, real estate, architecture, urban design and planning — and a strong voice to the issues SPUR saw facing San Francisco. These included civic design, architectural quality, design of the public realm, economic development and the functioning of the planning department. John’s incomparable design sense, world perspective and sublime drawings, combined with Ron’s experience as both a planner and as director of business development for the City and County of San Francisco, were an unbeatable combination.

In 1996, John and the Urban Development Committee lead the first in a series of white papers on improving city planning functions in San Francisco. That year, John also became SPUR’s vice president of programs and a member of the executive committee. Decades later, as John and SOM prepared an urban design for what was to become the Transbay District of San Francisco, including the placement of the tallest building in the city (the recently completed Salesforce Tower), he helped SPUR represent the public interest at every step of the way in creating this new neighborhood. He was everywhere.

As he termed off the board, John was sure to have another SOM partner teed-up to be an active SPUR board member. And as a lover of San Francisco, he would frequently show up at SPUR board meetings when issues of urban design import were on the table. He loved that San Franciscans have such a impassioned ownership over every inch of the city. “It’s because, when you come across the bridges, the whole city is laid out before you…you see it, you understand it, and it’s yours to cherish,” he would say. John, we thank you for your stewardship and for cherishing this wonderful city, region and SPUR. You will be missed.