A New Vision for Coyote Valley 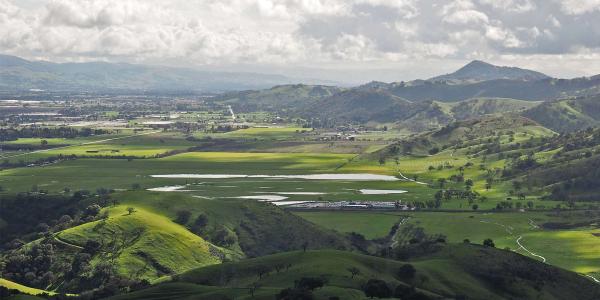 Nestled between the Santa Cruz Mountains and the Diablo Range, San Jose’s Coyote Valley is a paradox: Just 20 minutes south of downtown, miles of farmland and open space provide natural habitat for rare and endangered plants and animals. With such a vast amount of undeveloped land available in rapidly growing San Jose, locals have debated for more than a decade over its highest and best use: Should it be preserved and largely left in its natural form or used to build manufacturing space and grow jobs?

The history of land use in Coyote Valley is long and complex. Since 1984, much of North Coyote Valley has been designated for business and industrial uses. Developers in the late ’80s and ’90s had expansive plans to build corporate campuses there for Apple and Cisco Systems. But with the 2008 recession and changing trends in development, none of those plans were realized. While ownership changes have occurred since, no major new development has been proposed in many years. Despite the lack of market demand in the area, Envision 2040, the City of San Jose’s general plan, adopted in 2012, reaffirmed the long-term goal of developing North Coyote Valley, designating it as an area for employment growth and planning for up to 35,000 jobs.

While the conversation has spanned decades, the decision to preserve North Coyote Valley came back into the public eye this past year. In the fall of 2018, San Jose voters approved Measure T, a bond to fund upgrades to the city’s infrastructure, water quality and emergency and disaster response facilities, with $50 million allocated for land conservation, largely in Coyote Valley. With new funding available, many recognized that the time had come to change the long-term vision for North Coyote Valley and fully preserve this open space for good.

SPUR has advocated that San Jose should plan for Coyote Valley as agricultural and open space rather than as a jobs center. Our thinking is rooted in a number of policy positions we have promoted throughout the years. In our reports Rethinking the Corporate Campus (2017) and The Urban Future of Work (2012), we highlight the importance of locating jobs in accessible places that reduce drive-alone commuting, make more efficient use of land and reduce greenhouse gas emission. In Locally Nourished (2013), we highlighted the value that agriculture brings in diversifying the region’s economic base and its value as a land use that reinforces dense, urban growth rather than sprawl. For San Jose, the sum of these recommendations translates into concentrating job growth in already urbanized areas, not planning for greenfield development at the southern border of the city.

While SPUR saw the need to preserve this land, we also understood the importance for the city to maintain its ambitious job growth goals in order to generate revenue for city services. The jobs projected for North Coyote Valley are part of the city’s plan to support the industrial and manufacturing labor force. SPUR agrees that maintaining a diversified workforce is a critical function of a healthy local economy. But we believe that those jobs can be better supported in other locations within San Jose — particularly in areas that provide access to housing and public transportation.

Responding to the community, environmental agencies and local elected officials,  the City of San Jose entered into negotiations with the private property owners in North Coyote Valley in 2019. After months of negotiation, the land owners, city staff members, the Santa Clara Valley Open Space Authority and the Peninsula Open Space Trust arrived at a landmark decision: On November 6, the San Jose City Council agreed to purchase and preserve 937 acres in North Coyote Valley as open space. The city will provide $46 million of Measure T funds to make the purchase, while the Peninsula Open Space Trust will contribute $42 million and the Santa Clara Valley Open Space Authority will cover the remaining $5 million.

Now begins the journey to fully envision the potential this land holds for San Jose. While the land will not be used for commercial development, the investment to protect it will allow the city to innovate around flood protection, groundwater recharge, wildlife habitat protection and greenhouse gas reduction. The City of San Jose, through its four-year review of the Envision 2040 general plan, will begin the discussion about how to reallocate the jobs once designated for North Coyote Valley. The review process will also examine how to move forward with the ideas and goals to use open space as a leading strategy to proactively address climate change and resiliency within a community. SPUR is thrilled to be co-chairing the general plan task force and to participate in the next wave of planning for the new future of North Coyote Valley. We see this as another opportunity to realize many of the principles and policy interventions we have recommended for investing in nature-based solutions and preserving the urban boundary.