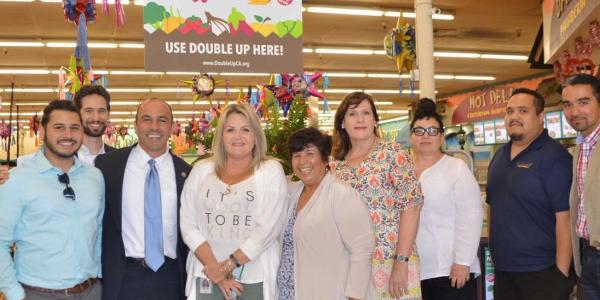 Congressman Jimmy Panetta (third from left) learning about Double Up Food Bucks during a store tour at Arteaga’s Food Center in Gilroy in 2017. A member of the House Agriculture Committee, Congressman Panetta was involved in the recently passed Farm Bill. Photo courtesy of SPUR.

Since 2017, SPUR has piloted Double Up Food Bucks California, a healthy food incentive program that makes fruits and vegetables more affordable for low-income families. Based on an evaluation of the program’s first year, we know that it is helping families eat healthier and stretch their food budgets further while also supporting California farmers. Our program’s success parallels that of many others across the country, which collectively have garnered the attention and support of elected officials. In fact, policymakers at both the federal and state level dedicated unprecedented amounts of money toward these programs in 2018.

On December 20, President Trump signed the 2018 Farm Bill, which includes a large bump in funding for incentive programs. In the previous Farm Bill, passed in 2014, Congress dedicated $100 million over five years for the Food Insecurity Nutrition Incentive (FINI) grant program (which helped launch SPUR’s Double Up Food Bucks program). Reflecting strong bi-partisan support for this program, Congress updated the annual funding for this program to increase from $45 million in 2019 to $56 million by 2023 (see section 4205 of the bill). Congress also renamed the program the Gus Schumacher Nutrition Incentive Program in honor of one of the pioneers and strongest advocates of incentives, who recently passed away. This appropriation level means that the funding will continue to be allocated for the US Department of Agriculture to disburse as grants, even if the Farm Bill is not reauthorized.

Here in California, the state legislature also boosted its investment in healthy food incentives this past June with two complementary approaches. The first was the California Fruit and Vegetable EBT Pilot Project (formerly known as SB 900, but passed as part of AB 1811) with a $9 million budget allocation. Senator Scott Wiener introduced the legislation, and SPUR co-sponsored the bill with California Food Policy Advocates. The bill and its accompanying funding directs the Department of Social Services to test an integration of incentives into the state’s electronic benefit transfer (EBT) system, which will address the biggest technological hurdle to scaling incentives statewide. The pilots are scheduled to be completed no later than the end of 2021.

Additionally, the legislature and the governor also approved an expansion of the California Nutrition Incentive Program (CNIP), a state-level version of the federal incentive grant program. Specifically, with the support of Assemblymember Phil Ting, the budget included $10 million to fund the expansion of incentive programs at farmers’ markets and small grocery stores across the state. The funding is to be spent by 2023. The legislature first allocated money to CNIP in 2016 with a $5 million appropriation that required the state to seek matching funding from the federal government. The legislative language that accompanied the budget this year made some changes to the program and does not require the state to seek the federal match this time.

Taken together, these investments demonstrate that healthy food incentive programs have garnered the strong support of policymakers. At the federal level, the fact that the final Farm Bill included increased funding for incentives is notable, especially considering that an earlier version — passed by the house the House but ultimately rejected —would have made significant cuts to the largest federal food assistance program (known as CalFresh in California). The final farm bill shows that incentive programs have broad bipartisan appeal. With extra grant money flowing in the coming years, we can expect to see these programs grow, mature and continue to demonstrate positive impacts on hunger, health and local agriculture.