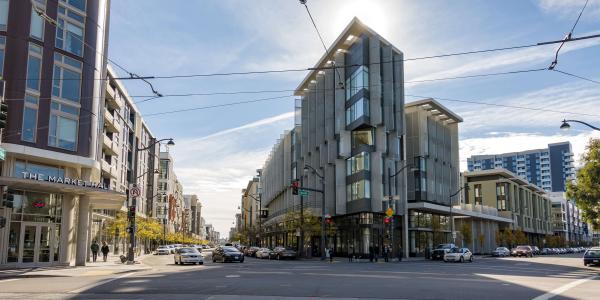 The dramatic escalation of housing prices in the Bay Area has sparked a lot of discussion about affordability — but what do we mean by “affordable” housing? Who is it for? How is it funded and created? Understanding the ins and outs will be key as Californians consider a $4 billion housing bond on the ballot this fall — and this probably won’t be the last time we’re asked to support funds for housing. Last year’s federal tax reform threatened and weakened the low-income housing tax credit, currently the most important source of funding for affordable housing. As state and local governments look for new sources of replacement funding, it’s a good time to get familiar with the details. Consider this a primer if you’ve been confused by what “affordable housing” is and how it is funded in the United States.

What does “affordable” mean?

To many people, “affordable” means a price they themselves could afford to pay for monthly rent or a mortgage. But to those who build and finance housing, it has two very specific meanings.

First, housing is considered “affordable” if a household pays less than 30 percent of its income on housing costs. If your household is paying more, you are considered “cost-burdened.” This standard measure, defined by the federal government but used broadly, applies to everyone, whether you’re living in a subsidized low-income housing development or in a high-priced single-family home. But it’s less relevant at the far ends of the income spectrum: 30 percent of $1,300, a typical monthly Social Security income, is not a realistic housing budget, and 30 percent of a “one percenter’s” income does not reflect any relevant measure of “cost burden.” Further, this measure does not provide a full picture of affordability because it doesn’t account for transportation costs, another major component of household budgets.

Second, the term “affordable housing” often refers to housing that is funded by the government, rented or sold at prices that are below the typical market rate and restricted to qualifying households with limited incomes. In the Bay Area, in California and across the United States, we need to support more of this kind of housing. While building more market-rate housing can help reduce scarcity and thereby lower housing prices in general, certain sectors of the population will never be served by the private real estate market including seniors on fixed incomes, people with mental health issues or developmental disabilities and youth aging out of foster care. In the current Bay Area housing market, even some working individuals and families need assistance to remain in the communities where they have roots or stable jobs.

How is affordable housing provided in the United States?

Affordable housing is not provided in a uniform way in this country. The four most common methods are:

1. Housing vouchers. The U.S. Department of Housing and Urban Development (HUD) provides rental subsidy through its Section 8 voucher program. People with vouchers live in apartment buildings or houses that are rented on the private market. They pay 30 percent of their income toward rent and give their landlord a voucher for the remainder, to be paid by the federal government. Since there are no limits on the rent the landlord can charge, but there are limits on how much the vouchers are worth, vouchers are often not enough to make up the gap, especially in an expensive market like the Bay Area.

2. Public housing. In the twentieth century, the federal government actively built, owned and managed public housing through local public housing authorities. While public housing may have been created with good intentions, the flaws that plagued this program have shaped the way people think about affordable housing. Changing federal priorities, shrinking funding and overtly racist policies served to drive most of these properties into disrepair and shrink the services provided to their residents. Today, local housing authorities continue to own and manage existing properties, but the government is not building new units in this model. In fact, through a fairly new HUD program, San Francisco and many other cities are transferring their public housing properties to nonprofit ownership and management.

3. Inclusionary housing. Many local governments, such as San Francisco and San Jose, require developers of market-rate housing to include some units for lower income people. Sometimes these units are provided on the same site, sometimes in a separate project, and sometimes the developer can pay a fee to fund another developer to build those units. Similarly, Oakland requires residential and office developments to pay impact fees that fund affordable housing. To live in inclusionary housing, potential residents must submit an application and, in some cases, enter a lottery to win a coveted spot. The developer is required to set rents at affordable levels and to verify that applicants both meet income requirements and can afford to pay those rents. Ultimately, the developer/owner pays the difference between the cost to operate the unit and the rents regulated by the city.

4. 100 percent affordable housing. Some developers specialize in building developments where 100 percent of the units are designated for people with low incomes. Primarily but not exclusively nonprofit organizations, these developers specialize in assembling different sources of government and other funding to make these developments possible. They are also expert in managing and providing services for the populations they are serving. As with inclusionary housing, people seeking affordable housing must meet income requirements and apply for open units — and will likely have to enter a lottery to win a spot. Unfortunately, affordable housing options are in such demand that its’ not uncommon for the number of applicants to be 70 times the number of available units.

Who is served by affordable housing?

Affordable rental housing most often serves very low and extremely low income households, which would currently include households with incomes of $30,000 to $75,000 (depending on the jurisdiction) for a family of four in the Bay Area. These are typically working families that cannot afford housing on the private market.

Some affordable housing, particularly in San Francisco and Santa Clara County, serves households that have even lower incomes and deeper needs. These buildings are specifically designed to support the formerly homeless or other populations with special needs, like youth aging out of foster care or people with developmental disabilities. These individuals or families have incomes far below 30 percent of AMI and greater need for support, including case management, mental health services, job training, alcohol and drug abuse programs, and other social services.

Less often, affordable housing serves moderate-income households, typically defined as households making from 80 percent to 120 percent of AMI. As a point of reference, in the Bay Area, a family of four that makes up to $140,000 would fall into this bracket. Typically the programs that serve moderate-income households are either inclusionary programs (with ownership units) or downpayment assistance programs.

How do we fund affordable housing?

With rents restricted to be affordable for people with lower incomes, affordable units can only support a small mortgage compared to their operating costs. Market-rate housing projects, including those that have inclusionary units, are typically financed with a construction loan, a mortgage supported by rents and equity from private investors. They do not or cannot typically access government subsidies to cover the gap for the inclusionary units so rely on market-rate rents to cross-subsidize the operations of the affordable units.

For projects other than inclusionary housing, developers must pull together a set of government or philanthropic subsidies to cover the cost of developing the project. In addition to a typical bank construction loan, sized according to the value of the project, and a mortgage that is supported by the rents residents pay, affordable housing developments are frequently funded by a long list of sources that include:

Developing and financing affordable housing is not a simple or inexpensive task, but it is a key investment in maintaining and growing the socioeconomic, racial and ethnic diversity of the region. Bay Area cities and voters have already made big commitments to affordable housing that make our region a model for others. At a time when the federal government is making clear moves away from investing in affordable housing (as well as many other needs), we in California and the Bay Area need to stand up and recommit ourselves to ensuring that we invest in affordable housing at high levels, even as we continue to increase the overall supply of housing. Stay tuned for a follow-up on why the market doesn’t provide more affordable housing to Bay Area residents on its own.